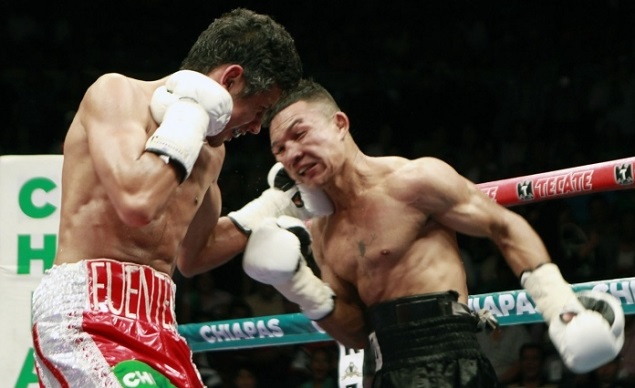 Luis De La Rosa said he is “going to make it a nightmare” for two-time Chinese Olympic gold medalist Zou Shiming, who will make his 10-round debut in their bantamweight bout on Saturday at the Venetian Resort’s Cotai Arena in Macao, China.

De La Rosa (23-3-1, 13 knockouts) was last in action for a second round knockout of Deivis Narvaez in November that helped him rebound from a first round stoppage loss to Moises Fuentes in September.

“When I was told about this fight, I immediately took it. I didn’t have to think twice. I have been training for four months,” said De La Rosa, whose other losses were an eighth round knockout to Merlito Sabillo in March 2013 and a split decision to Raul Garcia in October 2010.

“I’m going to be facing a fighter with a great amateur background but I’m a professional fighter with a lot of experience and I’m here to win. Zou Shiming is a great fighter but I’m really experienced at a professional level. I’m ready to take home the victory. Zou Shiming should fear me because on July 19, in front of all his fans at the Venetian Macao, I’m going make it a nightmare for him.”

Zou (4-0, 1 KOs) is coming off a seventh round stoppage of Yokthong (KKP) Kokietgym of Thailand in February and trainer Freddie Roach believes the 33-year-old has begun to improve his punching power.

“De La Rosa is the best opponent Shiming has faced as a professional. I am confident that Shiming is ready and prepared to go 10 rounds. The key for Shiming is to hurt De La Rosa early and set a fast pace for the fight after that. Shiming’s power has really developed,” said Roach.

“He has discovered power he never knew he had. His jab sets up an overhand right that is killer. He is sitting down on his punches. His combinations are outstanding. When he lands his power punches with 112 pounds behind them, Shiming will make his point to De La Rosa that he belongs.”

“I am pleased with my progress as a professional fighter but I want to show more of what Freddie Roach has been teaching me. Freddie has been a great teacher and an even better friend and mentor. I’m finally comfortable with the pro style of fighting. It may be unusual to move this fast to a 10-round fight but I have confidence in my team and if they think I’m ready, then I will be ready,” said Shiming.

“I am not nervous about facing a vastly-more experienced fighter like De La Rosa. I’m very excited about the opportunity. He is the type of fighter I need to beat to earn a world title shot. I do feel the pressure of my fans in China to meet their expectations but my amateur experience, including three Olympics and two World Championships, has prepared me for that pressure. I feel that my style and power are improving and that has bolstered my confidence.”