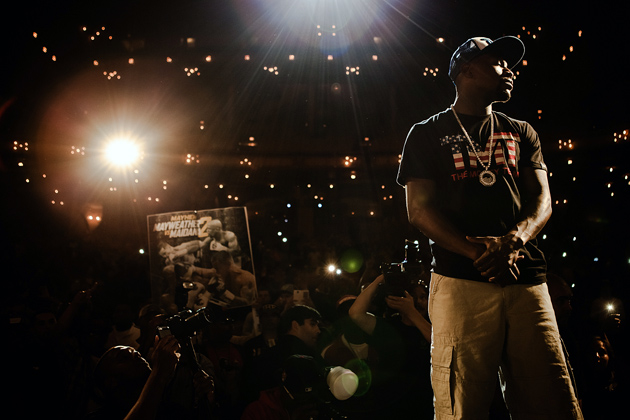 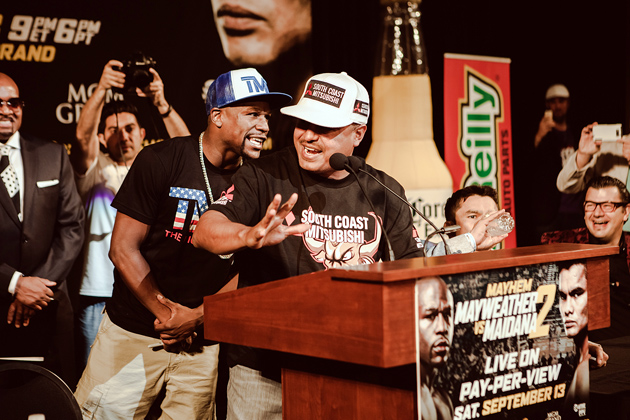 CHICAGO ÔÇö When Floyd Mayweather spars in his Las Vegas gym, it’s not often opponents are able to get the upper hand, so much so that if a sparring partner wins three out of the eight rounds against Mayweather on a given day, he hears about it from his crew.

Furthermore, it sticks with Mayweather. When the 37-year-old veteran travels back home to his mansion surrounded by an entourage and his family, the fighter is still thinking about it. He knows he could have dominated.

“The bar is set so high for me,” Mayweather said. “I go back and approach it like it’s a real fight. When I spar, I don’t talk no trash. I’m just keyed in on my fighter.”

So when Mayweather takes on welterweight Marcos Maidana in a rematch Sept. 13 at the MGM Grand, Mayweather said he isn’t looking for a “120-108” decision. He knows he can do better than a shutout.

“We going for the knockout,” Mayweather said. “Absolutely.”

Mayweather, as well as Maidana, were in Chicago Tuesday as part of the five-city press tour to promote their upcoming Pay-Per-View showdown on Showtime. The rematch was made after Mayweather won a narrow majority decision victory over Maidana in May.

This is just Mayweather’s second rematch in his 46-fight career. His prior rematch was nearly 12 years ago against Jose Luis Castillo, who gave Mayweather all he could handle in their first fight.

In the rematch, Mayweather made tactical adjustments. The 37-year-old fighter used his legs more to earn a unanimous decision, leaving the ring as the clear winner.

Despite having experience of making adjustments in a rematch, Mayweather said Tuesday that he feels he won’t have to make any changes when he faces welterweight Marcos Maidana again Sept. 13.

“Like I said about the Castillo fight, I know I won that first fight with ease,” Mayweather said. “I’ve been saying day in and day out; I’m not just fighting my opponent. I’m fighting the media and my critics.

Mayweather continued to say that fans hadn’t seen Mayweather like that because of the roughhouse tactics Mayweather felt Maidana used. Mayweather said he was hit with elbows, low blows and head butts throughout the fight.

Mayweather did, however, consider Maidana to be “up there” in the level of fighters he’s fought, which includes Oscar De La Hoya, Shane Mosley, Miguel Cotto and Saul Alvarez among many others.

“It’s obvious he’s doing something right if he’s facing me again,” Mayweather said. “But it’s going to be a total different night. As far as the referee, he’s going to be totally strict this time.”

The pound-for-pound star also had advice for Maidana.

Mayweather’s advice was another shot at Maidana’s trainer Robert Garcia. The two have exchanged words on this press tour and that continued in Chicago. During the press conference, Garcia openly challenged Mayweather with a “Winner Takes All” bet and extended his hand for Mayweather to agree to the deal. Mayweather ignored Garcia’s hand, but didn’t waste time at openly taking shots at him while at the podium, citing his losses to Diego Corrales and Joel Casamayor.

Maidana, on the other hand, was open about the changes he has to make in order to get a decision this time around.

“One of the things we’re going to concentrate on is distance control,” Maidana said via translator and Golden Boy Promotions Vice President Eric Gomez. “I think I smothered my punches a little too much in the first fight. I’m going to have to get a little more distance so I can extend my arms and get more power behind my punches.”

This is the first rematch of Maidana’s career, who maintains that he won the first fight.

“The pressure is solely on him,” Maidana said. “He has to maintain that ‘0’ and I’m just going to focus on beating him.”