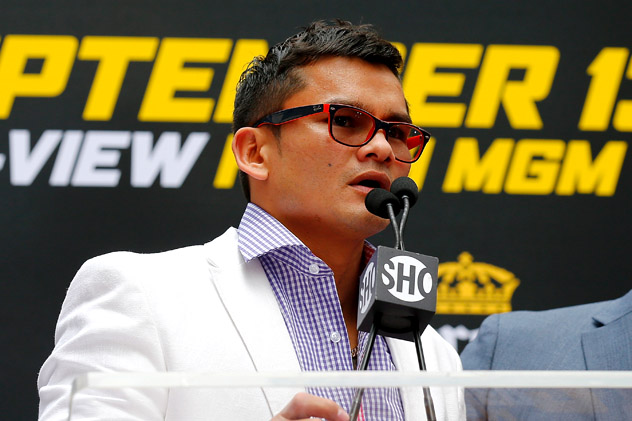 Marcos Maidana has made it perfectly clear: the Argentine slugger will be going for the knockout in his rematch with pound-for-pound king Floyd Mayweather Jr.

“I’m going to have to go for the knockout this time; I have no choice. Floyd’s defense is very good and, at times, it is hard to hit him. That’s why I want to knock him out,” said Maidana, who will face Mayweather on Sept. 13 at the MGM Grand in Las Vegas, site of Maidana’s majority decision loss on May 3.

“First, I’m going to give him a beating and then, I’m going to knock him out. It’s going to be hard to get a decision because he connects well and knows how to score points…Floyd can say whatever he wants about me. He knows that I gave him the toughest fight of his life. The only difference is this time is that I will knock him out.”

Maidana (35-4, 31 knockouts) expressed his thoughts during a Tuesday press conference in Chicago which represented the third stop in a five-city tour.

Mayweather (46-0, 26 KOs) and Maidana kicked off the tour with visits to New York and Washington, D.C. on Monday and included others in San Antonio on Tuesday evening as well as the final appearance in Los Angeles on Thursday.

“This will be a different fight. He knows what I bring to the table and he knows how I fight,” said Maidana. “I don’t want to leave any doubt whatsoever. To beat a champion like Floyd, you have to knock him out.”

But Mayweather countered that their rematch will be a repeat result of their first bout, owing to his superior skills.

“Fighting is not all about power. It’s about being smart. I don’t have to change anything. My job is to go out there and do what I am paid to do and that’s be smart and finish first. And I always finish first,” said Mayweather.

“I’m going to do the same thing I always do. It’s about blood sweat and tears and nobody does it better than me…My hand got raised so I don’t need to make any adjustments.”

Mayweather took a shot at Maidana’s trainer, Robert Garcia and challenged his opponent to “put his money where his mouth is.”

“His camp needs to make major changes if they want to have a chance. He needs to make some major changes and probably get a new trainer if he wants to have a chance against me,” said Mayweather. “If he really feels like he won the first fight, then he should bet his purse. He should put his money where his mouth is. But he knows he can’t beat me.”