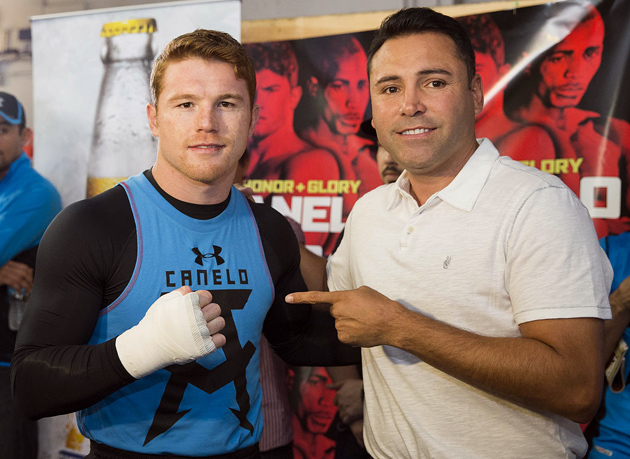 Miguel Cotto is a strong consideration as the next opponent for Saul Alvarez in the wake of Saturday’s split decision victory over 155-pound rival Erislandy Lara at the MGM Grand Garden Arena in Las Vegas, according to Golden Boy Promotions President Oscar De La Hoya.

In June, Cotto dethroned Sergio Martinez in the 10th round for the RING and WBC middleweight championships to become Puerto Rico’s first four-division titlist.

During a Sunday interview with RingTV.com, De La Hoya said Cotto was an obvious target for the 23-year-old Mexican star.

“‘Canelo’ wants to fight the very best and he’s going to continue to do so. Our options are wide open. Obviously, Cotto’s on the list,” said De La Hoya of Alvarez, who rehydrated to 171 pounds compared to Lara’s 166 after both fighters weighed in at the contracted 155-pound limit.

“Canelo is hungry right now and he calls the shots. I’ll be sitting down with Canelo and we’ll be going over strategy on what Canelo wants. Canelo has all of the options out there. I’m opening the door for everyone.”

During an interview with RingTV.com last month after Cotto’s win, De la Hoya said Cotto “looked sensational” against Martinez, adding that a bout with Alvarez would be huge.

“I would love to work with Cotto Promotions on a possible Canelo-Cotto fight,” said De La Hoya at the time. “July 12 is very important toward possibly seeing the pugilistic rivalry between Mexico and Puerto Rico once again. It would be Salvador [Sanchez] vs. [Wilfredo] Gomez, [Julio Cesar] Chavez Sr. vs [Edwin] Rosario, [Oscar] De la Hoya vs. [Felix] Trinidad. Huge!”