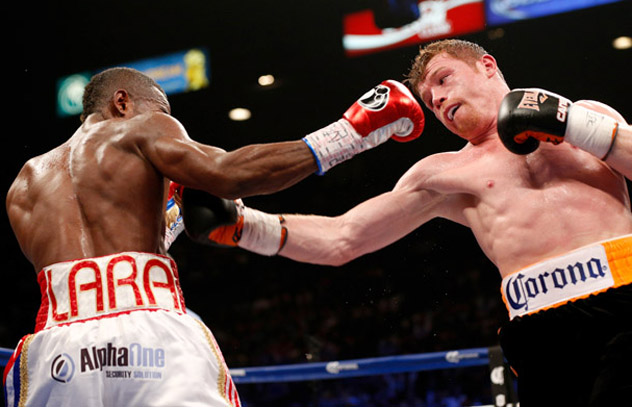 Alvarez was the aggressor throughout, chasing his nimble opponent around the ring and connecting enough – mostly to the body – to win over two of the judges, who scored it 115-113 and 117-111 in his favor. The Mexican obviously was given credit for effective aggression.

Lara did a good job of sticking and moving, scoring fairly consistently with his jab and quick combinations and then using his feet to get out of harm’s way. One judge scored it for the Cuban 115-113.

Alvarez (44-1-1, 31 knockouts) had problems cutting off the ring, particularly early in the fight. Thus, Lara, boxing beautifully, seemed to take an early lead. However, Alvarez gradually caught up with him and began to score consistently, particularly to the body.

The 117-111 score – nine rounds to three – by Levi Martinez didn’t reflect what happened in the ring. A 115-113 score for either fighter would’ve been acceptable.