Tony Bellew and Nathan Cleverly win to set up rematch 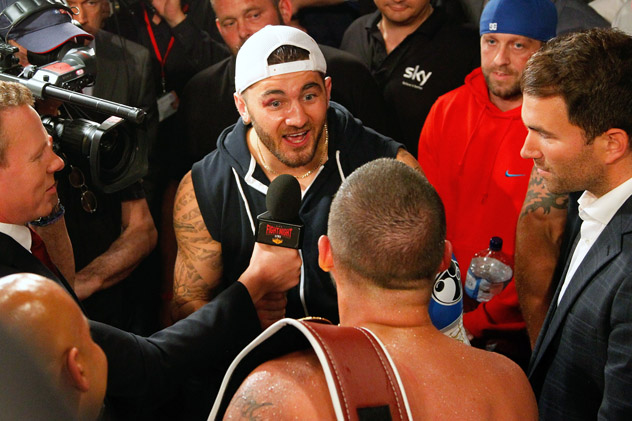 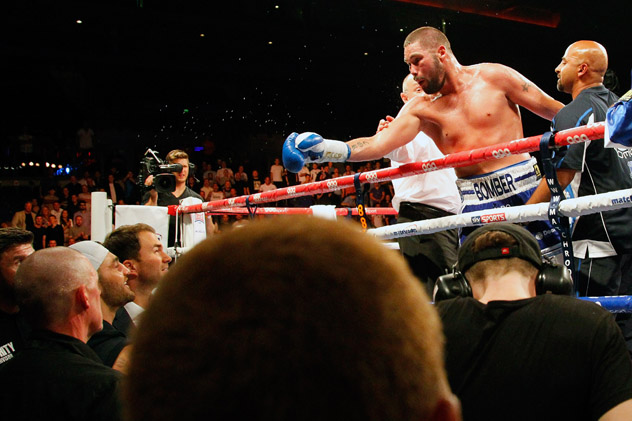 British cruiserweights Tony Bellew and Nathan Cleverly set up a rematch of their memorable 175-pound encounter, won by Cleverly three years ago, by posting convincing victories over Julio Cesar Dos Santos and Alejandro Valori, respectively, in Liverpool on Saturday night.

Cleverly, the former WBO light heavyweight champion, fulfilled his part of the deal with a one-sided drubbing of Valori, dropping the Argentine in Round 2 with a well-placed left hook to the body before closing out with an identical shot in the fourth. The official time was 1:16.

The Welshman, whose defection to 200 pounds surprised many experts, does look strong at the new weight and he seems to have carried his volume punching and power up with him. The only worry, ahead of a return bout with Bellew, is the soft nature of his recent opposition.

Cleverly (28-1, 14 knockouts) took eight months off following a knockout loss to Sergey Kovalev, last August, before setting his sights on becoming a two-weight world champion. That goal seemed realistic for a fighter of Cleverly’s caliber but Shawn Corbin folded in the second round of his cruiserweight debut, and tonight’s assignment was far from arduous.

“Let’s step it up now,” said Cleverly, when interviewed by Sky Sports. “You know what’s going to happen next, it’s going to be fireworks between me and that guy from Liverpool.”

Bellew, by contrast, was involved in a cerebral but hard hitting affair with Julio Cesar Dos Santos, but closed the show in spectacular fashion with a single left hook in Round 5.

Bellew took his licks, particularly in Round 4 when he was nailed by a brace of eye-catching right hands, but the equalizer was a sensational punch and the habitually durable Brazilian was unable to recover despite barely beating the count.

This was Bellew’s second bout at cruiserweight, following on from a 12th-round stoppage of former world title challenger Valery Brudov, in March.

Matchroom Promotions is keen for Cleverly vs. Bellew II to go ahead in October or November and there were angry scenes at ringside as the prospective combatants were brought head to head.

“We both know I was dead on the scales last time,” said Bellew, who weighed 198.75 pounds tonight. “The tables have turned and I just want to hurt you. I’m no longer a 16-fight novice who had only fought at British title level. I’ve achieved more than you have already, you were a plastic world champion.”

Cleverly said, “I’ve already beat this guy and I’m going to do it again.”

Super-hot contender Callum Smith, from Liverpool, was provided with his toughest test to-date by American southpaw Vladine Biosse, but passed with flying colors in a superb 10-round contest at super middleweight.

Biosse had his moments, testing the local fighter’s endurance on the inside during the first half of the bout but Smith responded by landing scores of highlight-reel bombs. The right uppercut, in particular, was a monster shot and as the bout drew to a close Biosse was merely seeking to survive.

The 10 rounds Smith (12-0, 9 KOs) banked will be more than useful for his career progression as the plan is for him to make an assault at world level, in effect bypassing the U.K. domestic scene.

Joshua, who is being touted as a heavyweight champion-in-waiting, had his way with the 47-year-old before dropping him heavily in Round 2 with a right hook to the head. Brave to the core, Skelton rose but the referee had seen enough following a string of powerful blows from the colossal Brit.

Olympic gold medalist Luke Campbell returned from a five-month layoff to outscore Craig Woodruff via shutout in a six-rounder at lightweight. Woodruff’s defenses were fairly solid and the former amateur star was forced to work for the duration of the contest, which was just what he needed. Campbell elected to take time out from the sport when his father fell ill and tonight was the first step in what is likely to be a busy comeback schedule for the quick-fire southpaw.

Although he was forced to survive the odd rough patch, Fielding was very sharp on the front foot. He decked his man with a solid left hook in Round 5 and went all out for the finish with a brutal assault, which forced the referee to call the fight off.

This was Fielding’s finest performance to date. Alcoba (30-4, 22 KOs) is a noted puncher whose only other defeats came to star players: Felix Sturm, Adonis Stevenson and George Groves.

Fielding weighed in at 167.5 pounds with Alcoba a half pound lighter.

Former two-weight British champion Stephen Smith outpointed Mexican journeyman Pedro Navarette over eight sessions at lightweight. There were no knockdowns, several of the rounds were devoid of meaningful action and the home crowd remained quiet throughout.

Smith (20-1, 12 KOs) did improve as the fight wore on, but couldn’t put a dent in Navarette, who has rarely been stopped.

Olympic bronze medalist Anthony Ogogo scored a fifth-round technical knockout over trial-horse Wayne Reed at middleweight. The British star had his man down in the opening minute courtesy of a rapid combination, punctuated by a sharp right, but Reed was brave and used his experience to stay alive.

The end came when Ogogo, who signed with Golden Boy Promotions in 2012, trapped his opponent in a corner and let fly with a prolonged assault which ultimately forced the referee’s timely intervention.