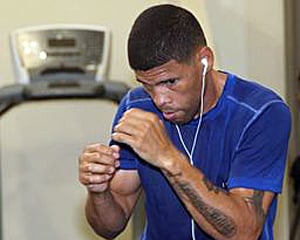 Juan Manuel Lopez said he wants revenge against Mikey Garcia and Orlando Salido, the men who knocked him out over the course of his three losses.

But to do so, the 31-year-old Puerto Rican southpaw knows he has to look good in Saturday’s junior lightweight clash with unbeaten Mexican Francisco Vargas at the MGM Grand in Las Vegas.

“I think that my experience is a big key,” said Lopez, who is 2-0 with as many knockouts at the MGM. “Everything that I’ve worked on in the gym, that’s a key.”

A two-division titlist, Lopez will meet Vargas (19-0-1, 13 knockouts) in support of the 155 pound main event between Saul Alvarez and Erislandy Lara on Showtime Pay-Per-View.

Vargas represents Lopez’s second fight since falling by fourth round stoppage loss to Mikey Garcia in June of 2013, culminating a stretch during which Lopez went 3-3 and was stopped in all of his losses.

Lopez had sandwiched a second-round knockout of Mike Oliver in October 2011 between knockout losses to Orlando Salido in April 2011 and March 2012.

Salido stopped Lopez in the eighth round to earn the WBO’s featherweight belt and knocked him out in the 10th of their rematch.

Lopez is coming off a tense second-round knockout of fellow two-division titleholder Daniel Ponce de Leon in March, representing a rematch of Lopez’s first round stoppage for the WBO junior featherweight title in June 2008.

“I’m back,” said Lopez, who was dropped early in the second by Ponce de Leon, whom he floored twice. “I’ve been working very, very hard for this and I’m back.”

The 29-year-old Vargas is coming off three impressive wins, the most recent being a unanimous decision over Abner Cotto in April that had followed consecutive unanimous decision victories over previously unbeaten Brandon Bennett and Jerry Belmontes in August and December, respectively.

Lopez aims to be the same version of himself that faced Ponce de Leon.

“I’m going to work every single round,” said Lopez. “If the opportunity presents itself, then I will go for the knockout.