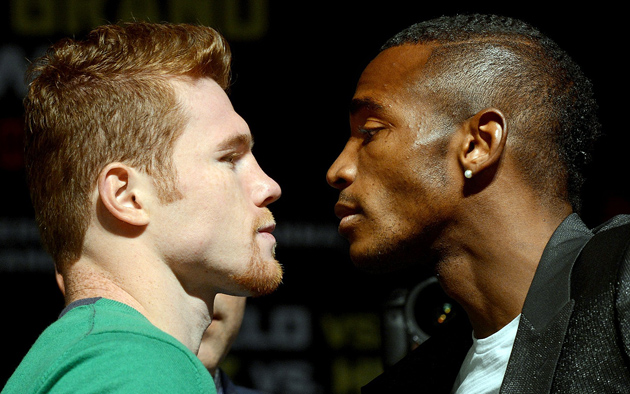 LAS VEGAS – The final press conference for the Canelo Alvarez-Erislandy Lara fight was a quiet one. All of the fighters involved in the Showtime Pay Per View event basically said the same thing on Thursday: “The time for talk is over.”

They all said they would bring their A-games and give the fans a show to remember, and there’s no reason to doubt any of them, but that didn’t stop Oscar De La Hoya from doing his best to help hype-up the event.

The president of Golden Boy Promotions reminded the boxing press that two of the fights on Showtime’s pay-per-view broadcast – Abner Mares-Jonathan Oquendo and Juan Manuel Lopez-Francisco Vargas – are crossroads bouts involving fighters from Mexico and Puerto Rico, two legendary boxing cultures that make up the fiercest Latino rivalry in the sport.

De La Hoya is absolutely right that the proud traditions of Mexican and Puerto Rican boxing add to the stakes and intensity of fights involving boxers from those cultures, but the same thing can be said of Saturday’s main event matchup.

The rivalry between Mexican and Cuban boxers isn’t as deep as it is between Mexico and Puerto Rico, mainly because Cuba produces fewer professional boxers due to the ban on pro sports that has existed on the island for more than 50 years (and because Mexico’s best young talent usually turn pro with limited – or no – amateur experience, so they don’t face Cuban amateur stars).

However, it’s safe to say that Cuba’s rich boxing history – which includes all-time great professional fighters, such as Kid Chocolate and Kid Gavilan, as well as countless amateur champions – is among the three or four best Latino boxing traditions along with Mexico, Puerto Rico and Argentina. (No disrespect to the boxing traditions of Panama, Venezuela, Nicaragua and Colombia, all of which are in the mix.)

Alvarez (43-1-1, 31 knockouts) defines the Mexican boxing tradition as “technical aggression” in which “pride and courage” is essential in connecting with Mexican fans.

The 23-year-old Mexican star respects Cuba’s boxing tradition, but he says it was better when the Caribbean island produced more professionals.

“Cuban boxing is definitely a beautiful school of the sport,” Alvarez said through Golden Boy Promotions matchmaker Robert Diaz after the press conference. “It’s a school of proper footwork and lots of speed with an emphasis on movement. But over the decades, it’s become an amateur style.

“A long time ago, Cuban boxers were great professional fighters, but the two best Cuban fighters of all-time, in my opinion, came from the Mexican school of boxing – Sugar Ramos and Jose Napoles.”

Ramos and Napoles are two former champions who turned pro in Cuba in the late 1950s before the conclusion of the Cuban Revolution and Fidel Castro’s ban on professional sports. Both fighters relocated to Mexico in the early 1960s, where they added the Mexican style of fighting to their Cuban foundation and became fan favorites in Mexico and the U.S.

Alvarez views Ramos and Napoles, both of whom are enshrined in the International Boxing Hall of Fame, as complete fighters. He says Lara is very talented but not a complete professional.

“He moves very well and he has a good, tight defense,” Alvarez said, “but his defense is to cover up, and he only moves with his feet.”

Alvarez is basically saying that Lara boxes like an amateur, which makes sense given that the 31-year-old southpaw is a 2005 world amateur champion and was once the captain of Cuba’s amateur squad.

“The Cuban school is the best school in boxing,” Lara said through co-manager Luis DeCubas Jr. “Look at the Olympics, the Pan-Am Games, the world championships, Cuban boxers always take the most medals in international competition.”

When asked to list his boxing heroes, Lara only gave the names of legendary amateurs, such as Teofilo Stevenson, he didn’t mention any professional standouts.

Of course, there’s more to Cuban boxing than amateur accomplishments.

“Cuban boxing is about mastering the craft,” said Bob Santos, Lara’s co-manager who is of Mexican descent. “Mexican boxing is about craft, too, but emotions play into the Mexican tradition. You have machismo with Mexican boxers, and often that means that you fight back even when you’re hurt or when you need to be thinking about defense.

“There’s a lot of heart with Cuban boxers but the Cuban school teaches you not to lose your head. Cuban fighters always keep their composure.”

“I can define Cuban boxing with one word: Smarts,” DeCubas said. “It’s counter punching, great footwork and technique. It’s also dedication. The Cuban school is the Marines of amateur boxing. Discipline is drilled into the boxers as children.”

Hall of fame matchmaker and promoter Don Chargin says indoctrinating fighting systems into the youth is something the two traditions have in common.

“I went to Mexico City many years ago to visit a gym run by Cuyo Hernandez, a great Mexican manager who had Ruben Olivares and Carlos Zarate and many other champions from Mexico, and I’ll never forget what I saw,” Chargin told RingTV.com. “Hernandez had a gym with three floors. The first floor was for main event-level fighters. The second floor was for young prospects and preliminary fighters.

“The third floor was just kids practicing the basics, and I mean kids, 6- and 7-year-old boys on a floor surrounded by heavy bags. These kids would practice the left hook to the liver and nothing else for hours. They would practice one punch until their arms were ready to fall off, then go home and come back the next day and do it again. They were just little kids but, boy, did they execute that left hook.

“In Cuba, it’s the same way, only they are away from home. Boxing is like their job.”

Actually, boxing is more than a job for Cuban and Mexican boxers; it’s a tradition, one that Alvarez and Lara look to uphold to the best of their ability on Saturday.

There aren’t dozens of high-profile showdowns between Mexican and Cuban fighters to choose from as there is with the Mexico-Puerto Rico rivalry, but there have been some notable bouts over the decades and it’s worth mentioning that when the best Mexican standouts face the top Cuban champs fans are treated to competitive boxing matches that showcase as much heart as technique and ring generalship.

The most recent example was between Joel Casamayor, arguably the most successful Cuban fighter of the last 20 years, and future hall of famer Juan Manuel Marquez. Casamayor, a former 130-pound titleholder, defended his RING magazine lightweight title against Marquez in December 2008 and the two master technicians boxed and fought each other to a standstill until Marquez clipped and stopped Casamayor in Round 11.

Other notable fights Casamayor had with Mexico natives include his very competitive split-decision loss to then-WBC lightweight titleholder Jose Luis Castillo in December 2004 and his controversial split-decision victory over Jose Armando Santa Cruz in November 2007.

Napoles, who like Ramos, fought many Mexican favorites, such as Baby Vasquez, in their adopted home country, was a welterweight champion who made 13 title defenses over two reigns during the 1970s.

Napoles’ final two title defenses came against Mexico-born Southern California-based contender Armando Muniz, who lost a controversial 12-round technical decision to Napoles in Acapulco in March 1975 and dropped a 15-round decision to “Mantequilla” in Mexico City in July of 1975.

Kid Gavilan, a great TV fighter, ticket seller and welterweight champion during boxing’s Golden Age, split two fights with popular Mexican contender Gaspar Ortega late in his hall-of-fame career – “the Cuban Hawk” won a 10-round decision in Miami in July 1957 and lost a 12-round decision in Los Angeles in October 1957.