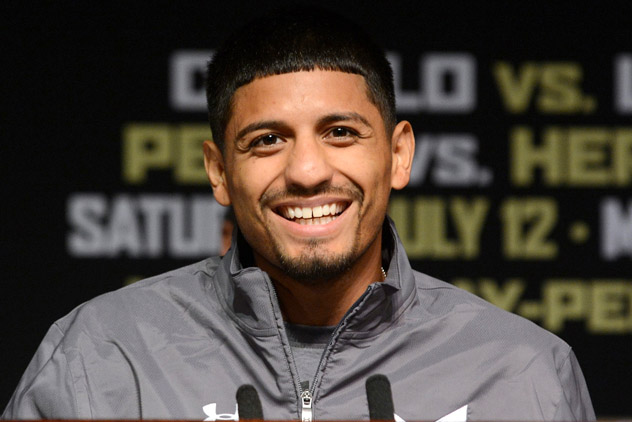 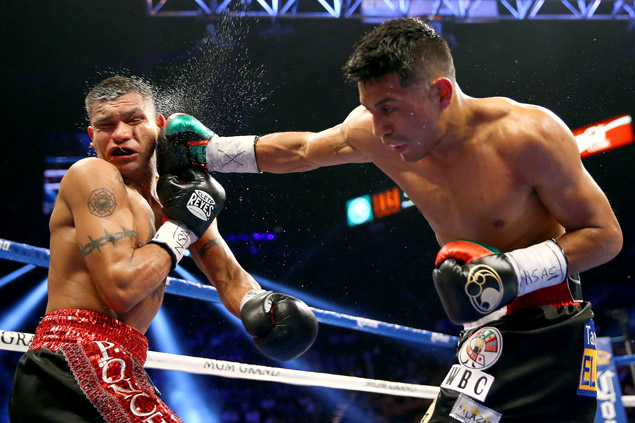 Three-division titlewinner Abner Mares vowed that the “forgotten” Mares will be “reborn” in victory over featherweight rival Jonathan Oquendo on Saturday as the chief support on the Showtime PPV undercard of the Canelo Alvarez-Erislandy Lara main event at the MGM Grand in Las Vegas.

“I’m over it. Believe me, I’m over that. I got knocked down, knocked out in the first round, and thank God that I didn’t get hurt. I was just knocked down,” said Mares.

“I was going to get up after the second knockdown, but God knows. He works in mysterious ways. It was a way to say, you know, maybe you’ve got to take it down, maybe, a little bit. I was taking these fights one hard fight after a hard fight, so here I am.”

THE RING’s No. 2-ranked featherweight behind Gonzalez, Mares has transitioned from longtime cornerman Clemente Medina to Virgil Hunter for the bout with Oquendo, 30, who is coming off a unanimous decision victory over Guillermo Avila in March.

The win over Avila represented Oquendo’s second consecutive win since falling by seventh-round knockout to ex-beltholder Wilfredo Vazquez Jr. in October 2012. Oquendo’s other losses were by disqualification to Oscar Andrade in 2007, and a 2008 knockout by Juan Manuel Lopez, who will also be on the undercard facing Francisco Vargas.

“There’s no easy fight in boxing. There’s no easy fight. Once you start thinking that way, then you make it harder. I’m definitely not taking this guy lightly. It’s my tough comeback fight, and I’m hungry, and I want to make an example of him,” said Mares.

“I want to let people know that Abner Mares is back, and what better way than to look for that knockout? What better way to come back than on this card? On Saturday night, you guys are going to see an Abner Mares who has been reborn.”

Against Gonzalez, Mares was fighting in his sixth consecutive title fight, spanning the bantamweight, junior featherweight and featherweight divisions.

Mares earned a split decision over two-division champ Vic Darchinyan, battled to a draw with then-titleholder Yonnhy Perez, and twice defeated ex-beltholder Joseph Agbeko (the first bout earning him the IBF 118-pound title) – all during a 20-month period as a bantamweight.

Mares then moved up to junior featherweight, where he outpointed Eric Morel for the vacant WBC 122-pound title and scored a unanimous decision over Anselmo Moreno, breaking the WBA bantamweight titleholder’s 27-fight winning streak. After that he rose to featherweight and knocked out Daniel Ponce de Leon in the ninth round. That was Mares’ last fight before the shocking loss to Gonzalez.

“First of all, I had a scheduled fight in February and I got a rib injury. We all know that when you’re hurt, and in the ribs, especially, that takes a long time to heal, so I took that time off. And what better way to take it off than with your family,” said Mares.

“I’ve been away from my family for so long, and I had been fighting back-to-back for so many fights against such great fighters. I’ve been such a busy fighter. I needed that. My body needed that, but now, I’m back. Being off 11 months, that’s nothing. I haven’t lost anything.”

Does Mares want revenge against Gonzalez?

“My weight division is packed right now. It’s packed with great talent, and I just want to let people know that I’m still here. If people have forgotten about Abner, you will know that Abner Mares is back on July 12.”