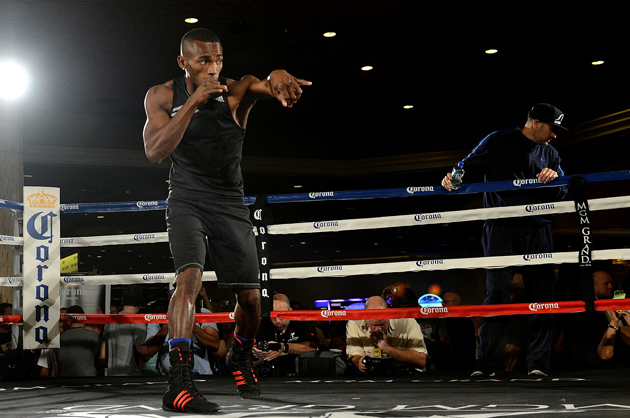 LAS VEGAS – Canelo Alvarez and Erislandy Lara met their fans on Wednesday at a public “workout” held inside the MGM Grand Hotel & Casino, the site of their Showtime Pay Per View-televised fight on Saturday.

The top two junior middleweight contenders didn’t actually workout in the ring that was set up outside of the KA Theatre. Both were too busy taking pictures and signing autographs for the large crowd of fans in attendance. That’s a good thing.

Alvarez and Lara deserve public attention, and the styles of the two 154-pound standouts should mesh to make for a competitive and entertaining main event.

Saturday’s undercard bouts aren’t bad, either, but let’s face it, nobody is going to buy the pay-per-view show because Abner Mares is fighting Jonathan Oquendo in the “co-main event.” Alvarez-Lara is what fans are interested in, so the main event is what RingTV.com asked the undercard fighters present at the public workouts to talk about (along with their own fights, of course).

Here’s what they had to say:

“I’ve been following Lara throughout his camp for this fight and I see a really positive attitude from him and a lot of confidence,” the 30-year-old featherweight told RingTV.com through his promoter Peter Rivera. “I think he’ll have a tremendous night. Of course, this is boxing, and we all know that one punch can change everything, but I think Lara is ready and I give him the edge in the fight.”

Oquendo, who has won two bouts since suffering a seventh-round stoppage loss to Wilfred Vazquez Jr. in October 2012, identifies with Lara’s opportunity to knock off a more popular Mexican star. Mares (34-3, 31 KOs), a three-division titleholder, is the more respected fighter and the odds favorite, despite suffering an upset first-round KO to Jhonny Gonzalez last August.

“My loss to Vazquez taught me that personal issues can interfere with how you perform in a fight,” the 30-year-old boxer-puncher said. “I don’t have any issues going into this fight. This is my moment. I’m ready for this one.

“I expect Abner to bring his best, too. Fighters react differently to being knocked out. I think he’s going to be just as motivated as I am, which should make for a good fight. If you know me, you that I can box, but I can also fight. If Abner wants to bring it, I’ll go toe to toe with him.”

Juan Manuel Lopez (34-3, 31 KOs), who faces unbeaten Mexican Olympian Francisco Vargas on the pay-per-view broadcast, agrees with his fellow Puerto Rican and gives Lara the edge in the main event.

“Lara’s very smart, smarter than Canelo,” the two-division beltholder from Caguas said through Rivera. “If Lara survives the first four rounds, he has a great opportunity to win.”

Winning is all Lopez has on his mind. After being brutally knocked out in featherweight title bouts against Orlando Salido (twice) and Mikey Garcia, the 31-year-old southpaw puncher salvaged his downward spiraling career with an up-from-the-canvas second-round stoppage of Daniel Ponce De Leon in March.

“My career is at a point where I can’t lose,” Lopez admitted. “For me to have any future, I have to win. I think making 126 pounds had become a struggle for me and contributed to those losses to Salido and Garcia. Fighting at 130 pounds, I feel stronger, better.

“Vargas is an Olympian, he’s good, but my experience will be the difference.”

Vargas (19-0-1, 13 KOs), of Mexico City, sees an even matchup between Alvarez and Lara, but gives his fellow Mexican the edge.

“It’s a very difficult fight for both fighters,” the 28-year-old 2008 Olympian said through Golden Boy Promotions matchmaker Robert Diaz. “Lara has good technique and good defense, but Canelo is very strong and a sharp puncher. I have to give Canelo the edge because of his strength.”

Vargas is confident that his strength will tell over the distance against Lopez.

“I know I have an experienced fighter in front of me but I also know, because of his losses, that he’s not invincible,” Varags said. “He punches very hard but I know he gets hit and I know he gets tired. So the longer it goes the better for me.”

Johan Perez (19-1-1, 13 KOs), who faces junior welterweight contender Mauricio Herrera in the opening bout of the pay-per-view broadcast, believes the longer the main event goes the more it favors Alvarez.

“I expect the fight to be very close, very even in the early rounds,” Perez, a 31-year-old native of Caracas, Venezuela, said through Diaz, “but in the end, I think the strength and power of Canelo will take over.”

Perez, a tall and rangy boxer who has outpointed former titleholders Steve Forbes and Paul Spadafora, as well as rugged welterweight slugger Yoshihiro Kamegai in recent bouts, says he isn’t going to rely on his skills to beat Herrera.

“I don’t have a particular game plan for Herrera,” he said. “The plan comes in training, being in top shape. I’m going to be very aggressive. The best defense is to be aggressive.

“I made the Kamegai fight easy by boxing him, but I’m going to impose my will and my style on Herrera.”

“Even better for me,” said Herrera, who is coming off a majority decision loss to 140-pound champ Danny Garcia in March that many observers thought he deserved to win. “That’s perfect. I was preparing for a boxer but I prefer that he bring the fight to me.”

The crafty 34-year-old late-comer says he’s had a better camp for Perez than he had for Garcia.

“I only had about six weeks to get ready for Garcia because the offer came late and I was in the middle of changing promoters (from Thompson Boxing to Golden Boy Promotions),” Herrera said. “I’ve had eight weeks to prepare for Perez, which I needed because I think Perez has a more difficult style than Garcia, who is kind of basic.

“Perez, like me, can be awkward, but I welcome the challenge. I’m doing what Danny Garcia should have done by fighting a tough opponent. Instead, he’s going backwards by fighting Rod Salka. I’m the one who’s acting like a champ and fighting a dangerous fighter. I might have some difficulties early on against Perez but I can adjust and I’ll be more impressive by the end of the fight.”

Herrera gives a slight edge to Lara in the main event.

“Canelo is a tough opponent and he’s probably gotten some good experience from the (Floyd) Mayweather fight, but I see Lara as being a little smarter,” he said. “I think Lara has better experience because of his amateur background.

“Lara knows how to use the ring, plus this is a big fight for him. He’s motivated.”

Tomoki Kameda (29-0, 18 KOs) will defend his WBO bantamweight title against Pungluang Sor Singyu on the Showtime-televised undercard portion of Alvarez-Lara. The 22-year-old Japanese star views the main event as a toss-up.

“It’s a really good fight,” said Kameda, the youngest of Japan’s three Kameda brothers (all of whom have won world titles). “I know that both will be prepared to go the distance. Canelo usually comes forward and Lara is a technical boxer, so it should be competitive and interesting. I can’t pick a winner or a favorite in this matchup.”

Kameda’s comments were translated from Spanish. The tall and rangy bantamweight, nicknamed “El Mexicanito,” speaks fluent Spanish because he moved to Mexico from Tokyo when he was 15. He teamed up with Mexico City-based trainer Ruben Lira and compiled a 33-1 amateur record before turning pro.

Although it was difficult learning a new language and adjusting to a different culture, Kameda says leaving Japan was the right decision.

“My brothers decided to do their entire careers in Japan,” Kameda said of his older brothers, Koki and Daiki, arguably the most popular and controversial boxers of their home country. “I didn’t want to follow their footsteps. I wanted to forge my own path.

“I moved to Mexico because there are a lot of good fighters there in my weight class. I thought it was a better way to start my career than to remain in Japan. I think I made the right choice.”

Jason Quigley, a former amateur standout from Ireland making his pro debut on the non-televised portion of Canelo-Lara, says the main event is almost too close to call.

“To be honest, I can’t pick a winner, I just know for sure that it’s a cracking fight,” said Quigley, the 2013 European amateur champion and 2013 world amateur silver medalist in the middleweight division. “Lara has the skill to win on points but Canelo has the heart and strength to beat him.

“But if anyone’s got an edge, I think it’s Canelo because of the Mayweather fight. I think that defeat helped refocus and motivate him and I think the way came back against (Alfredo) Angulo really let him know about himself.”