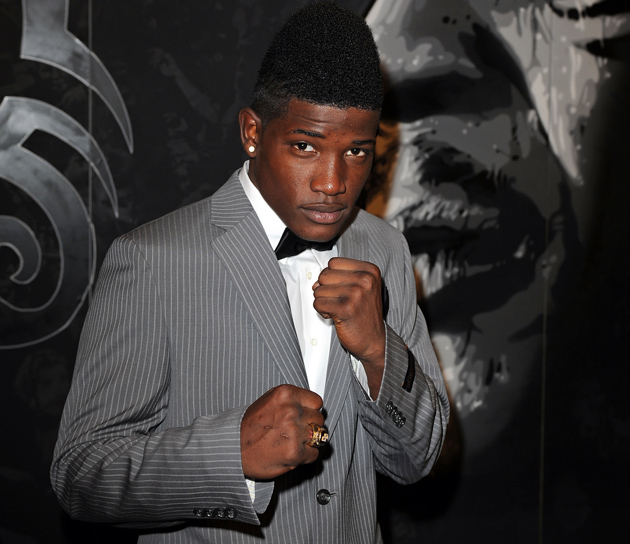 Best night of pro career: Lubin looked sharp stopping Tirobio Ball (4-1-1, 1 knockout) in the third round of his fourth fight on Feb. 22. The talented teen was patient and worked behind a stiff jab, which set up hard and accurate two- and three-punch combinations that systematically broke down Ball.

“I did everything in that fight,” Lubin told RingTV.com. “I had fun. It went three rounds, which is longer than my other pro fights, because he was real tough, but I just picked him apart.”

Worst night of pro career: With just five pro bouts – against competition that simply wasn’t on his level, according to most observers (especially ESPN commentator and boxing analyst Teddy Atlas) – Lubin has yet to experience a bad night.

Lubin’s promoter, former heavyweight champ and hall of famer Mike Tyson, admits that his star prospect has yet to face any real adversity in the pro ring.

“When we have matched him in fights with contemporaries, everyone has said that we fought him too soft,” Tyson, the president of Iron Mike Productions, stated in a recent press release. “There is no competition in four-round fights or six-round fights for him. The only way to really see him develop and to challenge him is to step him up. That is what he wants. Actually, that is what he demands.”

Lubin says he hasn’t experienced many poor outings prior to turning pro.

“All my losses in the amateurs were my worst nights as a fighter,” he said. “I hate to lose.”

Next fight: Lubin faces experienced Noe Bolanos (25-9-1, 16 knockouts) on Thursday in a Fox Sports 1-televised bout from Miami, Fla., that is scheduled for eight rounds. It will be Lubin’s first eight rounder. His previous five bouts were scheduled for four rounds. Bolanos, a former prospect from Sonora, Mexico, was considered a gatekeeper for contenders a few years ago but is viewed as a stepping-stone opponent now. The 27-year-old pressure fighter is just one bout removed from a streak for four consecutive losses in 2012 and 2013. Those losses, however, include an eight-round stoppage to former contender Luis Ramos and a 10-round decision to fringe contender Ed Paredes.

Bolanos was competitive with Ramos, who entered their September 2012 bout with a 22-0 record. Lubin likes the fact that he’s taking on Bolanos in just his sixth pro bout.

“I’m taking a step up in competition early in my career to show everyone that I’m ready for it and that I have what it takes to be the next champion,” Lubin said. “I want to make a statement against Bolanos. I’ve watched maybe one minute of one his fights, because my trainers to that to get me ready for him, but from what I seen, he likes to come forward a little. That will play into my hands. I’m way taller and bigger than him, and my jab will keep outside and in range. From first to eighth round, all my punches will be hard.”

Why he’s a prospect: Despite his young age, Lubin compiled impressive amateur credentials that includes national open-class titles, such as the 2013 Golden Gloves and the 2013 PAL championships, as well as top honors in some international tournaments, such as the Independence Cup, where he upset Cuban standout Yasniel Toledo Lopez, the 2012 Olympic bronze medalist in the 141-pound division, on his way to winning the gold medal at age 17.

A tall and rangy southpaw gifted with speed and punching power in both hands, Lubin possesses a sharp mind and versatile style that includes solid defense, footwork and angles. He also has a fan-friendly mentality.

“I’m a boxer-puncher,” he said. “I fight when I have to fight, but I box when it’s time to box. I’m aggressive but I’m well aware of my defense. I’m able to be defensive at the same time I let my hands go.”

Lubin has a strong work ethic and says that he’s always working on improving his technique. His gym work is aided by presence of junior welterweight prospect Amir Imam and fellow U.S. amateur standout and promotional/managerial stablemate Dennis Galarza (the son of Lubin’s trainer). Imam (14-0, 12 KOs), a talented boxer with good technique and power, is among the few fighters who can give Lubin quality sparring rounds.

“When (Lubin) has gone and sparred with some of the best guys in the world he has been dominant,” Tyson said in the recent press release.

“The first day in our gym he said that he wanted to spar with the best pros in the world. After a few months in the gym, we had to send him out on the road to other cities and other gyms where he could spar with the best.”

Why he’s a suspect: Lubin has yet to go past three rounds, so the level of his stamina in a real fight is unknown. He has also yet to be hit by a competent fighter with above average power during a pro fight, so his chin is also a question mark.

Story lines: Lubin was introduced to boxing by his older brother, Michael Louis, while he was still a toddler. Louis, a talented fighter who retired with a 10-1 (9) record after a brief pro career from 2008-2009, took his little brother to the gym during his amateur days. “My brother used to come home from the gym to teach me moves when I was just 4 years old. It sunk in because when I was old enough to go the gym, I already knew what to do. I had my first amateur bout at eight years old and I knew boxing was something I wanted to do seriously. Even as a kid, I always sparred with bigger kids in the gym and when I made them cry I said to myself ‘Wow, I got what it takes.'” Lubin’s accomplishments at the junior amateur and under-16 level, plus his brief-but-impressive showings in the open-class, made him one of the U.S. team’s best hopes to medal at the 2016 Olympic Games in Rio de Janeiro. However, Lubin’s decision to sign with Iron Mike Productions changed the Olympic track he was on, upsetting USA Boxing President Charles Butler, who claimed that Tyson’s upstart promotional company was hindering the growth of the program’s future Olympic squad. Lubin says he wasn’t pressured to go pro and that the decision to do so – which didn’t come easy – was solely his. “Winning a gold medal was a goal of mine for many years even though I had been getting offers to turn pro since I was 16. I made the choice to go pro when the right people approached me. I had always resisted, but the right people came together to offer me the right professional package. I took their offer seriously and talked it over seriously with my family before making the decision.”

Tyson, who defended Lubin’s signing with a public rebuke to Butler’s public admonition, believes the 18 year old is a future champion and star (and he thinks that potential will be realized sooner rather than later).

“There are exceptions to the rule, I was one, and I believe that Erickson Lubin will be one,” said Tyson, who won his first heavyweight title at age 20, a division record. “We have some very young talent that we will develop slowly, but this kid is different. He clearly has great talent, but he is also mentally tough and he’s ahead of everyone at this age, and he can handle it. He left the amateurs because he got bored, he wanted a challenge.”