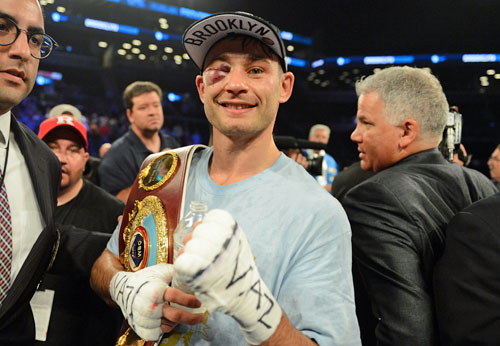 Artie Pelullo and Joe DeGuardia of Banner Promotions and Starboxing, respectively, want to strike while the iron is hot, parlaying Algieri’s dramatic split-decision victory that dethroned Ruslan Provodnikov last month into a fight with Pacquiao.

“We’re in the midst of everything on Algieri now, and I hope to have something this week as to where we’re going to be,” said DeGuardia. “We’re talking about Pacquiao. We’re looking into his next opponents as far as dates. I’m in the middle of it right now. I characterize the talks as discussions.”

“We have a Pacquiao offer on the table and we are negotiating that actually as we speak,” said DeGuardia, citing a seven-figure offer to Algieri, who would rise in weight to challenge for Pacquiao’s belt. “And I expect that we’re going to have a resolution within the next day or two.”

Arum said that he expects Pelullo to arrive at his vacation home in Los Angeles on Wednesday.

Pelullo, the promoter of Provodnikov, said that he has three options on Algieri as part of the deal for the HBO-televised fight with DeGuardia, Algeri’s promoter.

“There’s no sense in being quiet about it. I’m flying out to meet with Bob tomorrow at 2 p.m., and Algieri and Pacquiao is the conversation, and we’ll see how it plays out,” said Pelullo. “It’s a great opportunity for Algieri. I think that if he uses a similar style that gave Ruslan a hard time, that it’s the same style that will give Pacquiao a hard time.”

A 30-year-old resident of Huntington, Long Island, N.Y., Algieri (20-0, 8 knockouts) rose from two first-round knockdown and endured a right eye through that was reduced to a slit as well as a bloody nose against Provodnikov (23-3, 16 KOs) at Barclays Center in Brooklyn, N.Y.

“I just want fought the most dangerous guy around for very cheap,” said Algieri, in the wake of his triumph. “And now, it’s time for the biggest fight that I can get, and maybe that’s Manny Pacquiao.”

The 35-year-old Pacquiao (56-5-2, 38 KOs) was last in action in April, dethroning Tim Bradley by unanimous decision to regain the belt he lost by split-decision to Bradley in June 2012.

DeGuardia said Arum had alluded to a Pacquiao-Algieri fight being more attractive if Algieri was successful against Provodnikov.

A former kick boxing champion, Algieri is a clinical nutritionist who works with private clients, has a bachelor’s degree in healthcare science from Stony Brook University and a master’s degree from the New York Institute of Technology.

“With Algieri, you don’t see many college graduates in professional boxing, particularly those who are able to become a champion. So, that alone, would make Algieri pretty unique,” said Arum. “I’m intrigued by the fact that Algieri is a college kid who is very articulate and is somebody who is a credit to the sport. I think that’s more important to me than anything else.”

As far as the weight and location of the fight, Arum said, “All of these points are being discussed.”

Pelullo said that he is also interested in matching Provodnikov with the winner of an Aug. 2 welterweight battle between Brandon Rios and Diego Chaves that is happening on HBO from the Cosmopolitan of Las Vegas.

“We’re also talking about an opponent for Ruslan, and I would like to see the winner between Brandon Rios and Diego Chaves fight Ruslan in November,” said Pelullo. “We’ve discussed, that, Arum and I, so that would be another scenario. The winner of Rios-Chaves would be a great fight.”