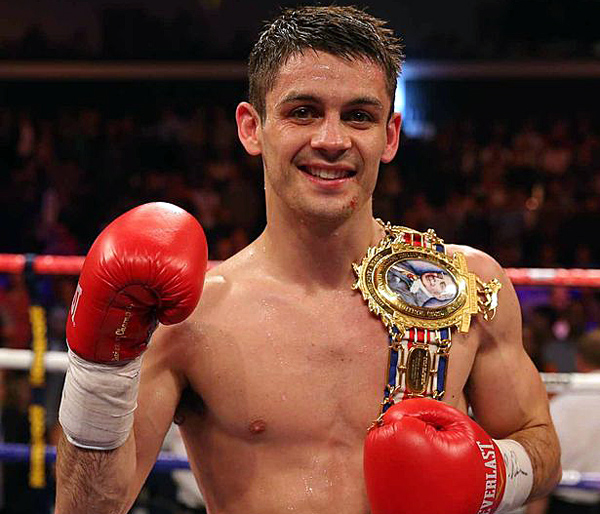 Talented junior lightweight Stephen Smith from Liverpool, England, returns this Saturday for a stay busy bout in his beloved hometown, but WBC titleholder Takashi Miura, whom he hopes to meet in October, is never far from his mind as he wraps up preparations for a scheduled eight rounder at the Echo Arena.

“Miura is a good technical southpaw, and he can punch, but I do think he’s vulnerable,” said Smith, who is 19-1 (12 knockouts). “His skill level is his primary asset because he’s good at finding counter shots and he also has an effective left hand. With that said I believe my skill level is up there with his and I’ll be able to box with confidence against him.

“If I land cleanly then I’ll do damage to any fighter in my weight class.”

That confidence is far from misplaced. Smith produced, for this reporter, the finest knockout of 2013 when he iced Welshman Gary Buckland with a spectacular right uppercut last August. That crunching power juxtaposed with technical finesse has created real audience appreciation, but will it be enough to lure Miura to the UK?

“It’s not easy to get a world title fight these days, so to get one in your home country would be a dream,” said Smith, with passion in his voice. “Still, I’ve got it in my head that I’m going to Japan and anything else is a bonus. My main motivation is to fight for the title and if I have to travel then that’s fine.”

It should be noted that Miura’s most recent title defense, against Dante Jardon, was held at the Ota-City General Gymnasium in Tokyo, which holds approximately 2000 people. By contrast, the fighting Smith brothers (there are four of them) are immensely popular and a world title bout would do big business on British shores.

“Yeah, people in boxing can see the obvious and those numbers don’t bode well for him in terms of his popularity,” said Smith, of his potential nemesis. “If Miura was more of an attraction then it would be common sense to go over there. However, if we can push for 10,000 fans in Liverpool it might make financial sense for all involved to do it here.”

So the paramount goal is a world title fight and plans are afoot to make that a reality. Still, whether Smith makes his challenge locally or 6000 miles from home, he wants to be tested and that is the essence of a fighting man. It’s for that very same reason that the Liverpool ace badly wants revenge for his stoppage defeat at the hands of Lee Selby in 2011.

“I definitely want that,” said Smith, in regards to a rematch with THE RING’s No. 9-rated featherweight. “Since our fight we’ve pushed towards world titles and now we’re both one step away. All being well the return fight would be a huge domestic showdown and it would be eagerly anticipated.

“I want to avenge my only loss after I become world champion. Any fighter, in the same position, would want that and I’m no any different. My pride was hurt with the loss to Selby and I want to put it right.”

That particular setback, which took place at featherweight, certainly hasn’t blunted Smith’s ambition or drive. His record at junior lightweight is 7-0 (6 knockouts) and trainer Joe Gallagher, who continues to forge his reputation as one of the most successful coaches in British boxing, is determined to bring out the very best in all of his fighters.

“Our camp is currently at 51 fights without a loss and that is relatively unheard of,” said Smith, with pride. “We want to keep this run going, so the next target is 60 fights unbeaten and if we achieve that we’ll have a pack of world champions. Anthony Crolla is close to getting a title fight with Richar Abril and my brother, Paul, takes on Arthur Abraham in September.”

Tough fights and testing times ahead for several of Britain’s best towards the end of 2014.

British fans can see the Smith bout, which precedes a double header featuring both Tony Bellew and Nathan Cleverly in action, on Sky Sports 1 from 7.00pm. Tickets are still available from www.matchroom.com