In the August issue of THE RING: Canelo Alvarez has no room for error 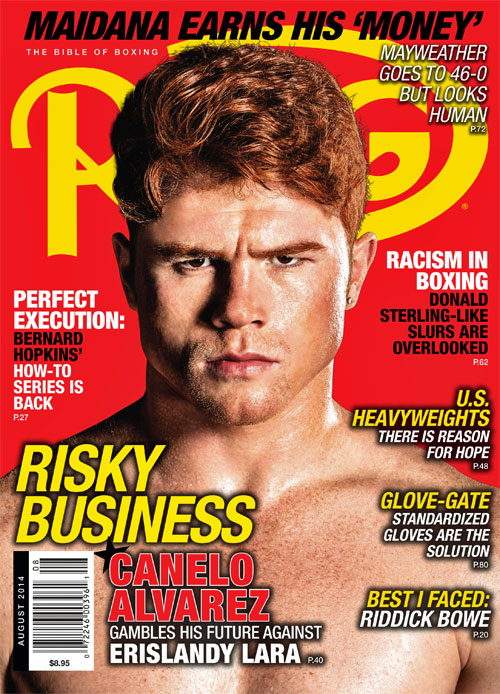 The August 2014 issue of THE RING Magazine, which is on newsstands now, includes a preview package of the Canelo Alvarez-Erislandy Lara fight.

On a humid South Texas afternoon in May, Mexican junior middleweight Canelo Alvarez, wearing a white shirt in lieu of a suit because of the heat, joined promoter Oscar De La Hoya on the dais of a makeshift plaza in San Antonio’s colorful Historic Market Square to formally announce a pay-per-view match with Erislandy Lara. An enthusiastic throng of Canelo fans assembled along the plaza’s perimeter, occupying a block of San Saba Street closed for the occasion.

Not lost on boxing insiders was this: Alvarez’s weigh-in with Austin Trout on April 19, 2013, closed three blocks of the same street, and Alvarez’s kick-off press conference with Floyd Mayweather Jr. 73 days later closed Alamo Plaza itself, with thousands in attendance.

The Canelo brand is still strong after his drubbing of fellow Mexican Alfredo Angulo in March but, some will argue, it was diminished by his one-sided loss to Mayweather in September. To return his career to its former trajectory, Alvarez will need to defeat Lara decisively on July 12 at the MGM Grand in Las Vegas. And very few things happen decisively to Lara in a boxing ring.

The challenger is a talented southpaw who was schooled in Cuba, the amateur hub of the sport for many years. His career has been marked by fits and starts but he remains one of the most dangerous junior middleweights in the world, one reason few potential opponents have wanted to engage him. Chances are you’ll lose. And if you win, you probably won’t look good doing it because of his ability to avoid dangerous exchanges of punches.

The fact that Alvarez decided to fight him at such an important juncture in his career says a lot about the Mexican’s confidence. Make no mistake: This fight, as much as any other, will help us gauge where the redhead from Guadalajara stands in the sport’s hierarchy.

“(Lara) has been avoided by every fighter, every top fighter, in the world, including Floyd Mayweather,” said Lara trainer Ronnie Shields. “Canelo is a very, very good fighter. But Erislandy Lara is one step ahead.”

To read the full story and other articles in the August 2014 issue of THE RING Magazine, please purchase the magazine at a newsstand near you. Don't know where to find it? Just scan the QR code below or go to http://www.wheresmymagazine.com, which will indicate what newsstands in your area sell THE RING. Or subscribe to the magazine — both the print and digital versions — by clicking here. You can also purchase the current issue on that page.