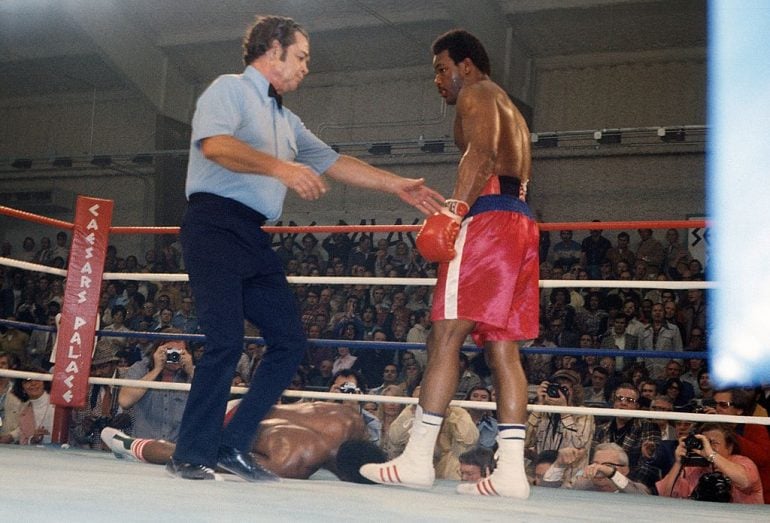 Perhaps no athlete in the history of sports has undergone a metamorphosis as startling as two-time heavyweight champion of the world, and first ballot Hall of Famer, George Foreman.

Teenage crime, rehabilitation, Olympic gold, Joe Frazier for breakfast, Ken Norton for lunch, five fighters in one night and a Rumble in the Jungle was only Act I. A 10-year interlude preceded Foreman’s return to the ring as the unrecognizable punching preacher, who was destined to reclaim the crown.

His 10th-round knockout of WBA and IBF titlist Michael Moorer shall forever be ranked as one of the most incredible moments in sports. “It happened! It happened!” bellowed HBO’s Jim Lampley in astonishment, as the 45-year-old Foreman regained the title on Nov. 5, 1994, some 20 years after losing it to Muhammad Ali in Zaire.

It sounds like an old Frank Sinatra song but Foreman has been a mugger, a contender, a champion, a preacher, a legend and a king. The hard hitting Texan made a fortune as a wrecking machine and, when his fighting career was closing down, added his name to a fat reducing grill, which is estimated to have earned him over $200 million.

By contrast many of his contemporaries are no longer with us. Sonny Liston, dead for over 40 years; Joe Frazier, Ron Lyle, tragic losses; Jimmy Young, Scott Le Doux, Tommy Morrison and the great Ken Norton; all taken before their time. 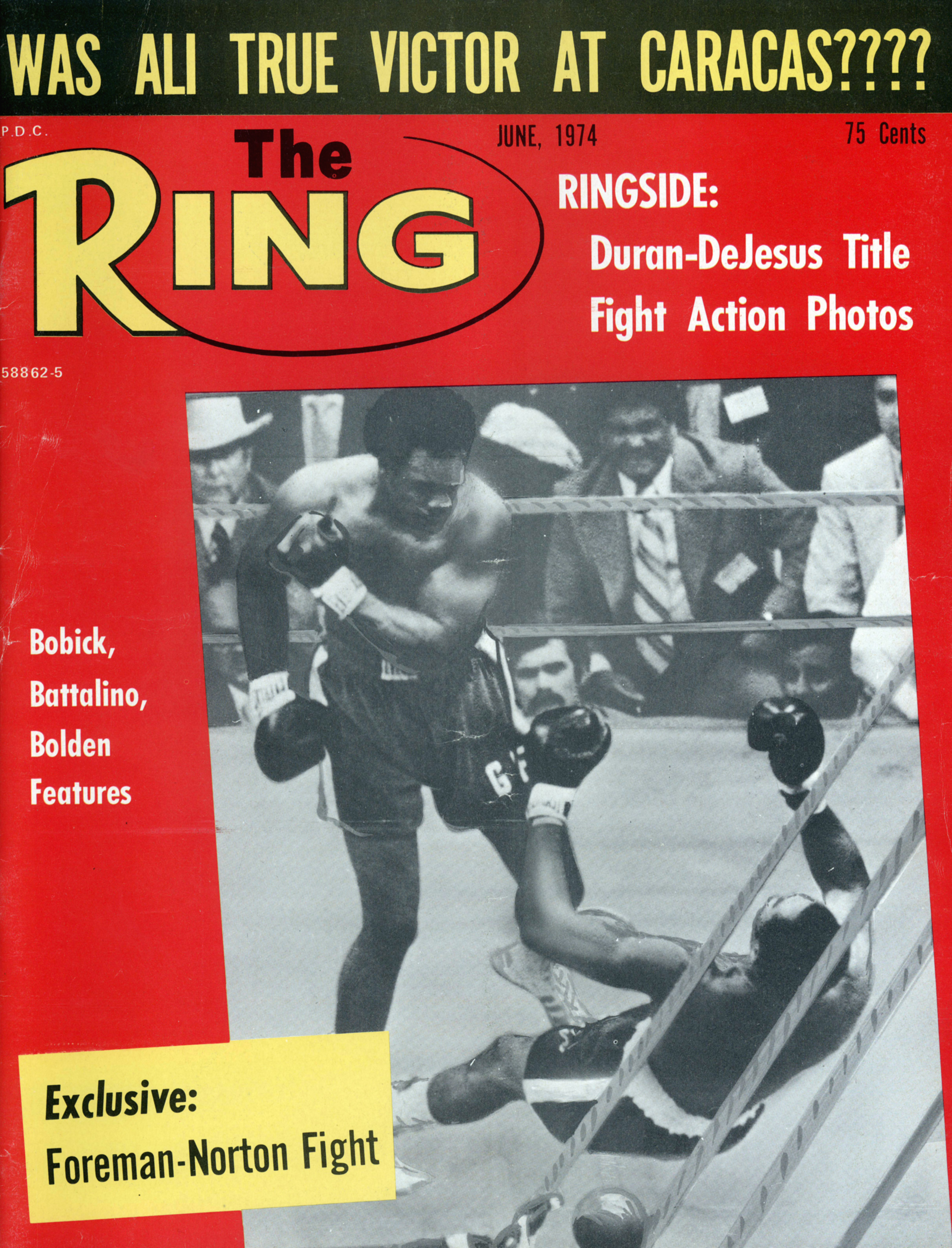 “Mirror, mirror on the wall, Norton was the fairest of them all,” said Foreman as he recalled his former adversary, who passed away last September. “They said Muhammad Ali was pretty but you didn’t want to take your shirt off around Kenny Norton because he would embarrass you.

“It was a frightening thing to look across the ring at him and see all those muscles staring back. He was also a far better boxer than he showed in his fight with me, and proved it against Muhammad and Larry Holmes.

Foreman continued, “Kenny suffered a stroke, months before he passed away, and some of us attended a WBC convention in Las Vegas, so that the proceeds could go towards his care. He didn’t need the money, but out of respect we all got in on it.

“What a guy he was. Norton was the most even tempered person you could meet and one of the most patriotic men I have ever come across.”

Meanwhile, Foreman presses onwards with his life’s work and shows no sign of slowing down. The American icon has hung up his HBO microphone, as well as his gloves, but continues to do what gives him the most pleasure in his home state.

“I’m still in Houston, Texas with my ministry,” said Foreman. “My profession since 1977 has been a professional preacher. I’m an evangelist with the church for the Lord Jesus Christ. It’s just that my real profession couldn’t feed me and all my kids, so I had to moonlight as a boxer. I stay in Houston because my ministry is there and I still run a youth center.”

Speaking of kids, it’s only fitting that we keep everyone up to date on how many Georges now co-exist in the Foreman family.

“There were six of us but now there are eight,” said the affable ex-champion. “Two of my sons had boys, who they named George, so we’re up to George VIII. I never forget a name and if boxing causes memory loss it doesn’t matter to me because everyone has the same name.”

RingTV.com spoke to “Big” George (76-5, 68 knockouts) about his remarkable career and the men who made it unforgettable.

BEST JAB
Sonny Liston and Ali. Sparring with Liston is the most dangerous thing that I ever did in my entire life. As I said earlier, no matter what I tried against him, it was me who had to revert back to boxing.  Nobody made me box like Sonny Liston did and that happened every time we worked together. He taught me many things, including the importance of the jab. I just couldn’t get mine straight and every day he had me working on it.  There were times when he could have knocked my head off but he didn’t because we were pretty good friends. I saw the way he stared at people and I took on some of that behavior to intimidate opponents. That was where some of that “Bad George” came from, hanging around with Sonny. That was gym work but in the professional ring it was Muhammad Ali because he would just spin that jab into my face. Boy he had an educated left hand. Norton had a good jab but he made the mistake of trading power punches because he’d heard my defense would let me down. If he’d boxed like he did with Muhammad I wouldn’t have gotten him so easily. Kenny had the wrong tactics that night.

BEST DEFENSE
Ali: Not during his time doing the rope-a-dope because he took a lot of punishment, when he was against the ropes. However, when Ali was out in the middle of the ring and we were boxing he was able to jab, slip, shoot the right hand and get out of the way. He knew something about defensive fighting but the rope stuff was me doing that to him, not him doing that to me. Jimmy Young was very clever, but I played around early in that fight and was just looking to go 12 rounds. Young was very skillful and smart because when I decided that I wanted a knockout, he clipped me. He was a very good defensive fighter but I wouldn’t compare him to Muhammad Ali. 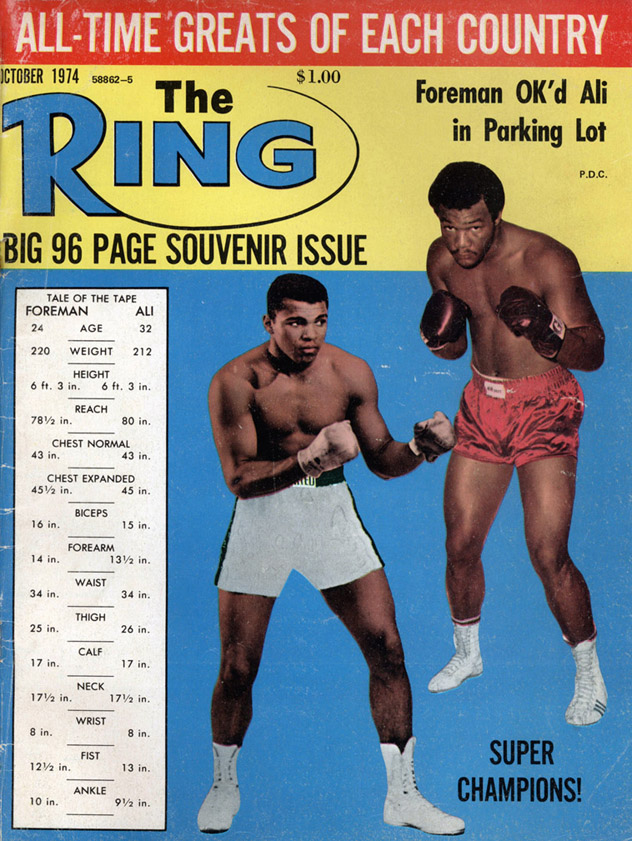 FASTEST HANDS
Ali: That right hand was the fastest punch I can recall taking in any fight. I mean it was “fast”. If Ali hadn’t lost his foot speed nobody would ever have lived with him. I couldn’t imagine a heavyweight having a right hand that fast. He takes this category hands down.

FASTEST FEET
Jimmy Young or Evander Holyfield: Ali had lost his foot speed by the time I fought him. I was always able to put my left foot between Ali’s legs and punch with him. Young’s feet were a little faster than mine but Holyfield excelled in this area when we fought. Evander also had fast hands but, unlike Ali, I saw all his shots coming. He hit me with a lot of punches but I saw every one of them (laughs).

BEST CHIN
George “Scrap Iron” Johnson: I hit him so often that I damaged my hands in that fight. He had taken “Smokin” Joe Frazier the distance and had the best chin I’d ever come across. They stopped the fight but I couldn’t get him out of there cleanly. I still haven’t knocked him out (laughs).

SMARTEST
Ali: I hit Ali with a huge body shot and normally a punch like that would make someone fire back and leave themselves open. Ali didn’t care about the pain and covered up because he knew he couldn’t punch with me. After three or four rounds he took control and my chance was gone. I remember Angelo Dundee shouting “Muhammad, don’t play with that sucker!” I was tired in the fight but right until the end I thought I was going to knock him out because I had always found that big punch. I kept saying to myself, I’ll get him in a minute. I was exhausted, could barely breathe but all I needed was one shot. There were occasions when I was almost throwing myself over the ropes trying to nail Ali.

STRONGEST
Ron Lyle: He was the strongest man I ever faced in any fight. The likes of Shannon Briggs, and men like that, didn’t affect me because they were just ordinary fighters. They didn’t make an impression and I just chased them around. The men I faced in the seventies were more fearsome than the ones I faced in the eighties and the nineties, with the exception of Evander Holyfield. Evander could have competed in any era.

BEST PUNCHER
Lyle: This guy hit me so hard that it didn’t even hurt. Joe Frazier caught me with the left hook but he couldn’t hit like Lyle and although Muhammad knocked me down I was exhausted and still got to my feet. Lyle was the hardest hitter. The thing about Lyle was he was complete unafraid and challenged me at ring center. Nobody, other than Sonny Liston in sparring, stood and punched it out with me with any success. Joe Frazier only tried once and even the great Muhammad Ali couldn’t back up quick enough. Ron Lyle would not back up.

BEST BOXER
Ali: He was so gifted technically and his jab was the best I ever faced in the ring. Ali could jab going backwards or to the sides and that shot would always find you. He would catch me with the jab as I was coming forward and it was so difficult to counter that punch. He would spin that jab over and over.

BEST OVERALL
Lyle: I have to say Lyle because he gave me the toughest fight of my career. He hit me so hard, knocked me down, got knocked down and picked himself up. That was the hardest fight I ever had in my life. With Muhammad Ali I could do whatever I wanted, but I got tired and he was able to knock me down. If I had been more respectful of Ali I could have coasted at stages in that fight, and preserved energy, but I couldn’t coast with Ron Lyle because he would have killed me.