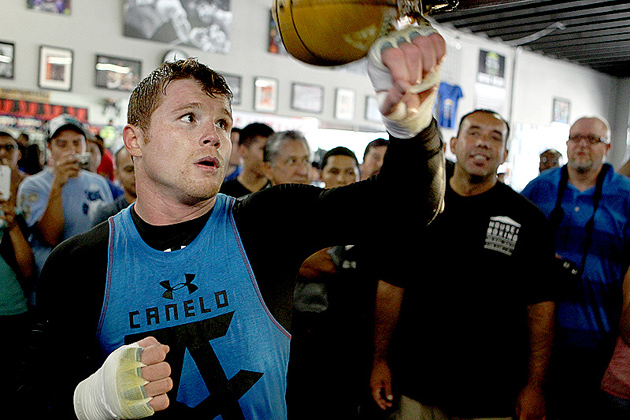 Canelo Alvarez vowed to silence what he considers to be a trash-talking Erislandy Lara when they meet on July 12 at the MGM Grand in Las Vegas. The Mexican star also weighed in on the potential Floyd Mayweather Jr.-Marcos Maidana rematch, hoping it's not as dirty as the first bout.

"Erislandy Lara has talked a lot of trash, and that's why he's gotten this opportunity," said Alvarez, who turns 24 on July 18. "He said a lot of things in the media and on Twitter and in various other social media."

Alvarez has sandwiched victories over Austin Trout and Alfredo Angulo around a majority-decision loss to Mayweather last September in which Alvarez lost his RING and WBC 154-pound titles.

Nine months before Alvarez stopped Angulo in the 10th round, Lara did the same, rising from two knockdowns to do so. Lara then dominated Trout in December, dropping and nearly stopping him in the 11th round of a unanimous decision in December. He then called Alvarez "a baby" for not fighting him.

"Lara's a good 154-pounder, and I'm going to give him credit for that. But this fight is about the glory and the honor," said Alvarez.

"I'm fighting this fight because of the trash that Erislandy Lara talked these last couple of months, and I'm going fight him on July 12, and I'm going to shut him up."

In May, Mayweather won a majority decision over Maidana, adding the Argentine slugger's WBA 147-pound belt to the RING and WBC championships he already owned. On Tuesday, both Mayweather and Maidana indicated that talks are ongoing for a return bout on Sept. 13.

Mayweather had complained of dirty tactics from Maidana.

"Hopefully," said Alvarez, "this time, around, the fight won't be such a dirty match."