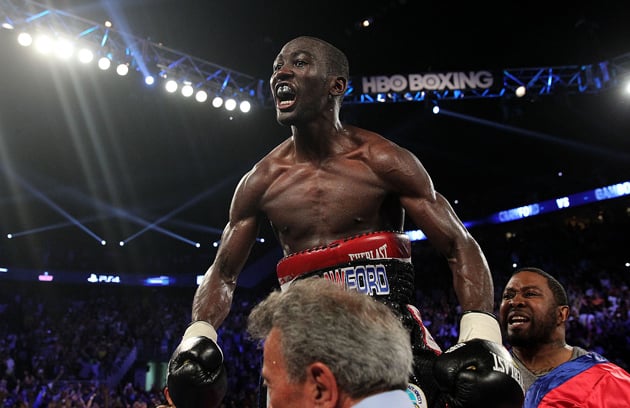 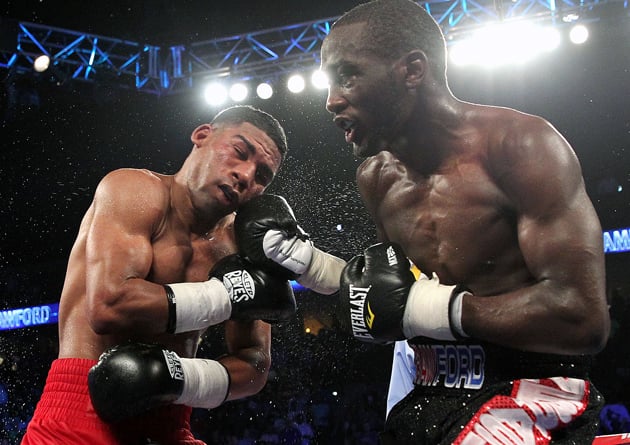 Terence Crawford said Yuriorkis Gamboa "picked the wrong fighter and the wrong city" after flooring the former featherweight beltholder four times during his come-from-behind ninth-round stoppage in defense of his WBO lightweight title before 10,943 raucous fans at CenturyLink Center in Omaha, Neb.

Crawford (24-0, 17 knockouts) dropped Gamboa (23-1, 16 KOs) once each with right-left combinations in Rounds 5 and 8 and twice more in the Round 9 for the victory as referee Genaro Rodriguez waved an end to the bout at the 2:53 mark.

"I told Gamboa he picked the wrong fighter and the wrong city and I was right," said Crawford, who floored Gamboa the third time with consecutive left hooks, with the fourth and finishing knockdown coming from a vicious, head-swiveling right uppercut. "When you fight a shorter fighter you attack with uppercuts. This is what we worked on during training camp."

RingTV.com awarded the first three rounds to Gamboa, who out-hustled Crawford early on. Even after having twice been down, Gamboa appeared to have rocked Crawford with two hard right hands near the start of the ninth.

"After Terence knocked him down twice," said Brian McIntyre, Crawford's trainer, "I said in the corner that Gamboa would come back real fast, and he did."

Crawford said that he was, nevertheless, undeterred.

"I never felt any danger in the fight. His hand speed didn't bother me at all," said Crawford, who weighed in at 134.8 pounds to Gamboa's 134.5, and entered the ring at a re-hydrated 152 to his rival's 145. "At the start of the fight, I took my time to get my timing down. It was important to get his timing squared down."

"I look at all of my fights as big fights," said Crawford. "When I got into the ring my focus was only on Gamboa."

On the Crawford-Gamboa undercard, middleweight Matt Korobov (24-0, 14 KOs) scored two seventh-round knockdowns on the way to a 10-round unanimous decision over Jose Uzcategui (22-1, 18 KOs), whose knockout streak ended at five.

Click here for Terence Crawford stops Yuriorkis Gamboa in Round 9