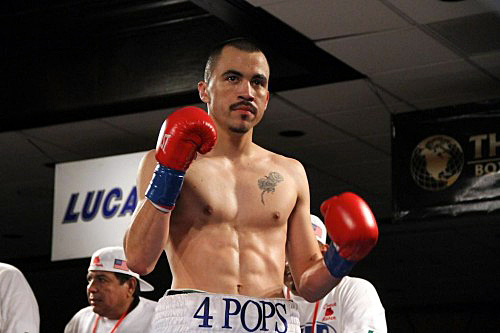 Artemio Reyes must have a fascination with the number two.

Prior to his 10-round bout against Abraham Alvarez on Friday night, Reyes had scored eight second-round knockout victories.

Alvarez ended up being knockout victim number nine of fighters Reyes has stopped in the second round.

Reyes dropped Alvarez three times en route to a second-round stoppage victory before a partisan crowd at the Doubletree Hotel in Ontario, Calif.

Reyes began to impose his will and power on Alvarez after the first minute of the opening round.

The beginning of the end came for Alvarez moments into the second round. A left-right combination to the head of Alvarez dropped him to the canvas. He got up and tried to fight back, but was dropped by a counter right hand to the head.

After getting up a second time, Alvarez went into a shell, trying to land anything to keep Reyes at bay. During an exchange, Reyes landed a right hand after Alvarez threw a jab, dropping him a third time to the canvas. Referee Ray Corona saw enough and waved the fight over at 2:01.

Roman wins in a war

The action was mostly fought in the center of the ring, as Roman took more of the initiative during the first half of the fight. He was rewarded by landing multiple combinations to the head, with some of those punches snapping Arrellano's head back.

Arrellano attempted to counter with hooks to the head. While some of those punches landed, Roman was able to capitalize on Arrellano leaving himself to be countered.

The ebb and flow continued into the second half of the fight. Arrellano began to initiate exchanges, where he was able to land more, especially to the body of Roman in an attempt to slow him down. A counter right hand by Roman momentarily wobbled Arrellano in the fifth round, but Arrellano was able to recover and get through the round.

As the bout progress, both fighters stood in the pocket, landing vicious combinations to the head and body. But it was Roman who landed the harder punches, at times stopping Arrellano in his tracks. The punches Roman landed began to take their toll on Arrellano, as he slowed down considerably, especially in the eighth round.

Francisco A. Salazar has written for RingTV.com since October 2013 and has covered boxing in Southern California and abroad since 2000. He also covers boxing for the Ventura County (CA) Star newspaper, Boxingscene.com, and Knockout Nation. Salazar can be reached by email at [email protected] or on Twitter at FSalazarBoxing