Terence Crawford TKO 9 Yuriorkis Gamboa live round by round updates 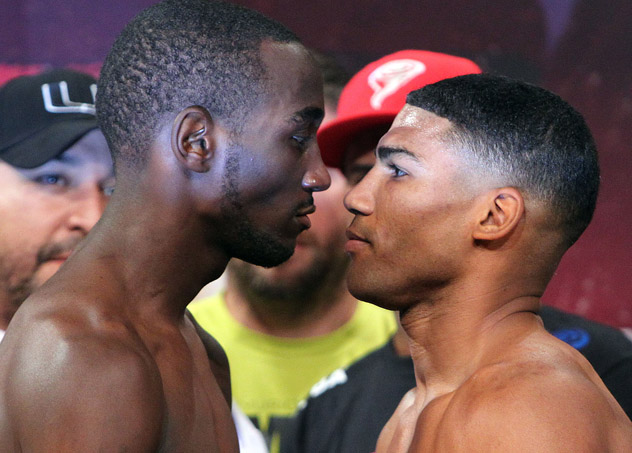 RingTV.com has a live round-by-round updates of tonight’s lightweight bout during which WBO titleholder Terence Crawford scored four knockdowns on the way to a come-from-behind ninth-round technical knockout victory over former featherweight beltholder Yuriorkis Gamboa before 10,943 fans at CenturyLink Center in Omaha, Neb., on HBO.

Referee Genaro Rodriguez waved an end to the fight at the 2:53 mark. Crawford out-landed Gamboa, 146-to-82 overall.

Gamboa being led into the ring by his promoter, Curtis Jackson (aka rapper 50 cent).

Crawford is being roundly cheered by the partisan crowd. They are going absolutely nuts!!!

Round 2: Gamboa out-landed Crawford, 7-to-4 in the first round, which HBO ringside scorer Steve Weisfeld awarded to Gamboa. Two jabs by Crawford and a right land. Crawford's eying the counter right after taking a couple of rights and a third all to the body. Left hook over the jab by Gamboa. Nice. Double-jab by Crawford and a right. Gamboa's movement is troubling Crawford. Left, right, left to the body by Gamboa. Right lands for Crawford. Two lefts by Crawford between a one-two by Gamboa. Right hand and left hook by Gamboa, the latter landing cleanly. Crawford lands a hook against a retreating Gamboa at the bell. Gamboa, 10-9; Gamboa, 20-18.

Round 3: Both fighters landed eight punches in the second round. Weisfeld has Gamboa ahead, 20-18. Inside, Gamboa is getting off first during a clinch. Crawford's trainer wants more right hands. Jab, right, hook all thrown by Gamboa. The hook did not land. Left hook and a right land for Gamboa, who also continues punching during a clinch. Right hand lands for Gamboa. Crawford switches to southpaw. Right hand lands by Gamboa. Left by Crawford. Right hand by Gamboa and a left hook. Speed for Gamboa is the difference. Hard right by Gamboa and then another. Double-jab by Crawford. Two more right hands land for Gamboa, who also took a couple of lefts. Gamboa, 10-9; Gamboa, 30-27.

Round 5: Weisfeld has it for Gamboa, 40-36. Hard left to the body early by Crawford and a couple of right hands. Right for Gamboa. Crowd chanting Crawford's name. Right by Gamboa. Another right and then a left by Gamboa. Two rights by Gamboa with a left uppercut between by Crawford. Right jab by Crawford. Right to the body for Gamboa. GAMBOA DOWN BY A HARD RIGHT HAND AND THEN A LEFT!!! HE'S BRIEFLY IN PRONE POSITION, AND THEN HE'S UP. Takes the count. Crawford lands another left that hurts Gamboa. Gamboa gamely firing back, but he takes a hard right to the body. Gamboa still is in trouble. HARD RIGHT BY CRAWFORD AND A RIGHT ALSO HURT GAMBOA. 10-8, Crawford, Even, 47-47.

Round 6: Crawford's in control to start the sixth, although the game Gamboa still is in there to fight. Left by Crawford. Gamboa clinches. Crawford boxing well. Jabbing from a distance and not going crazy. Crawford's keeping Gamboa on the end of his punches, but takes a solid right. Crawford answers with a solid left. Solid jabs out of the southpaw stance and good movement by Crawford. He's confident. They trade right hands at the bell. Crawford, 10-9; Crawford, 57-56.

Round 8: Weisfeld has the fight even at 66-66. Crawford's poised out of his jab, and has Gamboa reaching. Gamboa's right eye swelling. Solid jabs. Three jabs by Crawford and a fourth before he throws the straight left, all of which land. Right by Gamboa reaching. Crawford lands to the body. Another jab. Gamboa lands to the body in side. Right and left by Crawford. GAMBOA DOWN FROM A RIGHT-LEFT COMBINATION. He's up. Crawford's patient. Tremendous left hand to the body. GAMBOA STAGGERED AFTER A COMBINATION THAT ENDS WITH A RIGHT-LEFT. Crawford, 10-8; Crawford, 77-73

Round 9: Crawford out-landed Gamboa, 30-7, in the eighth round. Right and left hurt Gamboa. Two right hands hurt Crawford. Crawford holds on. Gamboa trying to land cleanly, pounding away with free hands during the clinches. Left hand by Gamboa. Clinch by Crawford. Right by Gamboa. They trade lefts. Two jabs by Crawford and a right. GAMBOA HURT, AND THEN, DOWN BY TWO HARD LEFT HOOKS!!!! He's up, but wobbly. Gamboa trying to hold on. HARD RIGHT UPPERCUT HAS GAMBOA DOWN AGAIN, FIGHT'S OVER!!!!!