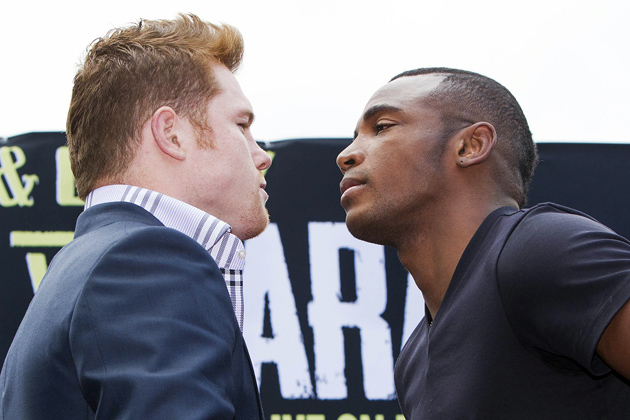 Saul Alvarez recalls being challenged and upstaged by Erislandy Lara during a press conference and states his belief that he is less selective of his opponents than both Floyd Mayweather Jr. and Manny Pacquiao during the premiere episode of Showtime's All Access in advance of the July 12 clash between Alvarez and Lara.

Airing at Friday night at 9 p.m., All Access explores Lara's defection from Cuba, Golden Boy Promotions President Oscar De la Hoya's stint in rehab for substance abuse and what drove Alvarez (43-1-1, 31 knockouts) to accept the bout with Lara (19-1-2, 12 KOs) in advance of their junior middleweight bout at the MGM Grand in Las Vegas.

"I've accomplished so much at such a young age but I'm still not satisfied," said Alvarez, who rebounded from a majority decision loss to Mayweather in September with a 10th-round stoppage of Alfredo Angulo in March. "I want to be so much more. I have the opportunity to chose my opponents. The same as Pacquiao or Mayweather but the difference is, I choose the most dangerous opponents."

Prior to facing Mayweather, Alvarez unanimously decisioned previously unbeaten southpaw Austin Trout, flooring him in the seventh round of their bout in April 2013 that drew nearly 40,000 to the Alamodome in San Antonio.

In Lara, Alvarez faces a fighter whose past two wins were a 10th-round stoppage of Angulo, during which Lara was floored once each in the fourth and ninth rounds last June, and a unanimous decision over Trout, whom he dropped in the 11th round in December.

During a press conference promoting Alvarez's bout with Angulo, Lara took the stage and interrupted a speech being made by Alvarez.

"In front of everyone here who are dying to watch us fight, I just want to know when we are going to do it," said Lara. "Fighters know the danger that I pose in the ring. I'm a smart and challenging boxer."

It was that confrontation, said Alvarez, that prompted him to grant Lara's wish.

"The press conference where Lara got up on stage, that definitely bothered me," said Alvarez. "I'm not one of those fighters to do that type of thing. Him talking so much was the straw that broke the camel's back. That's why we're fighting now…Oscar advised me not to take the fight with Lara but I want to fight the most dangerous opponents."