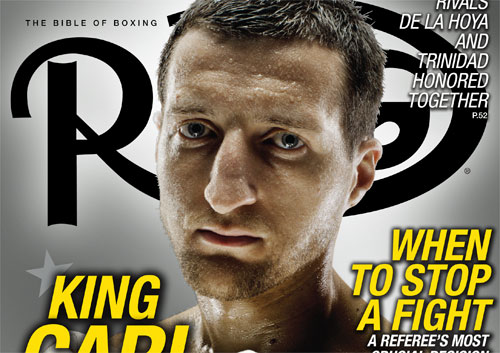 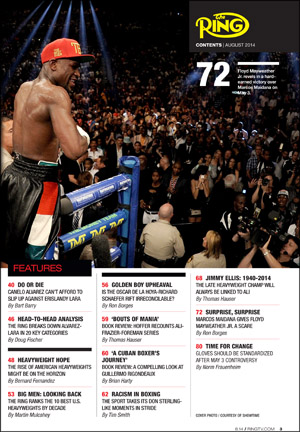 The August 2014 issue of THE RING Magazine is on newsstands now. To subscribe — both to the print and digital versions — click here. You can also purchase the current issue on that page.

No one can say Canelo Alvarez isn’t taking a risk on July 12 at the MGM Grand in Las Vegas.

That’s when the young Mexican star will tangle with Erislandy Lara, the Cuban southpaw with the slick, refined skills that can make life difficult for almost any opponent. Alvarez certainly could’ve found a less threatening opponent.

If Alvarez wins, it would help restore any lingering damage to his credibility from his loss to Floyd Mayweather Jr. If he loses, his star power will have taken a serious hit.

“This is the fight the fans have been asking for. I am going to prepare myself for a great victory,” Alvarez said.

Bart Barry, a regular contributor to THE RING Magazine, explores in No Room for Error Alvarez’s journey from the Mayweather fight through an impressive victory over Alfredo Angulo to his latest challenge.

Barry explains why Lara is a legitimate threat to win the fight and gets into his weaknesses, which were most recently exposed in a tough victory over Angulo.

Also, in Canelo Has His Work Cut Out, RingTV.com Editor Doug Fischer breaks down the Alvarez-Lara fight in our head-to-head analysis.

In the feature, Fischer gives scores (1 to 5) to each fighter in 20 key categories. The totals might surprise. Fischer also makes his prediction.

Also in the August 2014 issue, in Heavy Wait, contributor Bernard Fernandez chronicles Chris Arreola’s failed bid to bring a major heavyweight title back to the U.S. but writes that the Americans’ day could be coming soon.

As part of that feature, contributor Martin Mulcahey put considerable time into putting together a fascinating list of the Top 10 American heavyweights in each of the last 10 decades in a feature we call From Dominant to Afterthought.

The list clearly reflects the decline of the Americans and rise of heavyweights from Europe.

Tim Smith writes in Rolling with the (Racial) Punches that boxing has had to contend with Donald Sterling-like comments but seems to get past them more easily than in other sports.

In Ali and Friend, contributor Thomas Hauser looks back on the career of former heavyweight titleholder Jimmy Ellis, who might be best known for his long relationship with sparring partner and onetime foe Muahmmad Ali.

In Gut Check, Ron Borges looks back on the surprisingly competitive fight between Mayweather and Marcos Maidana and what it could mean for Mayweather’s future.

And Norm Frauenheim writes in Lessons of Glove-gate, the glove controversy that preceded the Mayweather-Maidana fight, that standardized gloves could be the answer to the ongoing issue.

Don't know where to find a newsstand near you that sells THE RING Magazine? Click here.