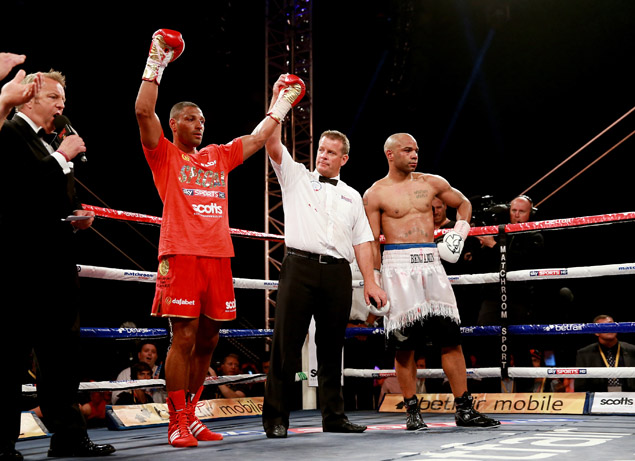 Welterweight Kell Brook's promoter, Eddie Hearn of Matchroom Sport, said he would pursue a bout with English countryman Amir Khan should Brook get beyond a planned clash of unbeatens against IBF titleholder Shawn Porter.

"Of course, Amir Khan will be our first port of call," said Hearn, during an interview with RingTV.com on Tuesday. "That's the biggest fight in the United Kingdom right now, pretty much, that can be made."

A confident Hearn believes that Porter will "get stopped or knocked out" by Brook (32-0, 22 knockouts) if "Porter fights as erratic like he was" during his last fight, a fourth-round stoppage over former two-division titlist Paulie Malignaggi in April.

A winner of his past four fights by stoppage, Brook already has signed to face Porter (24-0-1, 15 KOs), whose father and trainer, Kenny Porter said the beltholder is planning to "sign the contract" on Tuesday to face Brook.

Brook, 28, is coming off an eighth round TKO over Alvaro Robles in March that had followed a fourth round stoppage of ex-beltholder Vyacheslav Senchenko in October.

Khan, 27, was last in action for a battle of former titleholders in his welterweight debut in May, when he scored three knockdowns en route to a unanimous decision over southpaw Luis Collazo at the MGM Grand Garden Arena on Showtime Pay Per View.

Although Khan has been angling for a shot at Mayweather, Hearn said there would be significant interest in an all-England 147-pound bout should Brook dethrone Porter for the IBF's belt.

Prior to facing Collazo, Khan had been out of the ring for more than a year, previously having won a unanimous decision over two-time lightweight titleholder Julio Diaz in April 2013.

Khan had relatively struggled over the course of his previous six fights, going 4-2 with two knockouts. During that time, Khan lost his IBF 140-pound belt by disputed split decision to Lamont Peterson in December 2011 and was knocked out in the fourth round of his subsequent bout by RING junior welterweight champion Danny Garcia in July 2012.

"I once offered Khan $5 million to fight Kell Brook. I mean, mad money," said Hearn. "That was a couple of months ago. The fight's big enough for that not to be a problem. So hopefully, Kell wins this next fight against Shawn Porter and then, Khan is definitely first port of call."