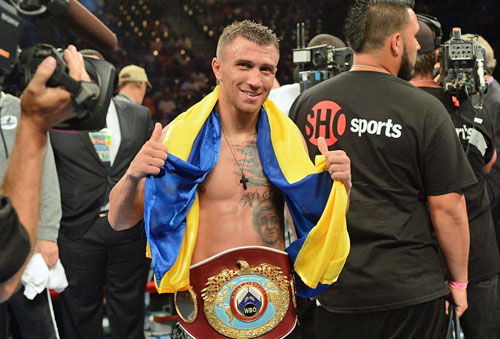 Vasyl Lomachenko: Lomachenko’s performance against Gary Russell Jr. in a battle of young prodigies on Saturday night was flawed. And he STILL won comfortably (116-112, 116-112 and 114-114). That says a lot. The former Ukrainian amateur star wasn’t as active as Russell but he made his punches count, hurting Russell noticeably in at least four of the 12 rounds. The sound of Lomachenko’s brutal body shots reverberated across the StubHub Center. And perhaps less obvious was the fact that Lomachenko is a terrific defensive fighter, with quick feet and lightning reflexes. Russell threw a lot of punches but connected at a low percentage, which can be attributed to Lomachenko’s talents. Overall, it was a splendid performance from an oh-so-gifted boxer who was coming off a disappointing loss to Orlando Salido. The main flaw? Lomachenko seemed to take off periods of rounds, which allowed Russell to stay in the fight. The loser would’ve earned a draw had he won the final two rounds on the 116-112 cards. That sort of behavior could cost Lomachenko against other elite opponents. However, he has had only three pro fights, according to Boxrec.com. He has a lot of growing to do. One thing is certain: The victory over Russell, which gave him the vacant WBO featherweight title, was an important step in his career.

Gary Russell Jr.: Russell accepted the defeat but said afterward that he strayed from the game plan, that he should’ve made more of an effort to take the fight to Lomachenko. I’m not sure anything would’ve made a difference. Russell was fairly aggressive, throwing a lot of punches (806, according to CompuBox). The problem was both Lomachenko’s defensive skills and the fact the Ukrainian is physically much stronger than Russell, who seemed to be in the ring with a bigger man. He simply couldn’t hurt Lomachenko enough to get his full respect. That said, there were positives. Russell’s remarkable quickness was on display throughout the fight. No one will question his skills and athleticism. And he proved to be very resilient, taking the best Lomachenko had to offer and remaining on his feet. These are strengths that will serve him going forward. And remember, this was Russell’s first big fight. He will have learned from this. He lost, which had to be a tremendous disappointment for a fighter with big plans, but he confirmed that he is one of the more gifted boxers in the world. Gary Russell Jr. is just getting started.

Guerero-Kamegai: Surprise, surprise. Robert Guerrero was expected by some to ease back into boxing after his one-sided loss to Floyd Mayweather Jr. and a subsequent 13-month layoff against a hand-picked opponent at the StubHub Center. Instead, he wandered into trench warfare. The fighters threw any pretense of defense out of the window, instead standing toe to toe and whaling away non-stop from beginning to end. It was as brutal a fight as you’ll ever see. Guerrero (32-2-1, 18 knockouts) emerged with a unanimous-decision victory – 116-112, 117-111 and 117-111 – but also left the ring with a cut, swollen-shut left eye – which forced him to fight one-eyed for six rounds — and an assortment of bumps and bruises that served as evidence of the wild brawl. Yoshihiro Kamegai (24-2-1, 21 KOs) worked just as hard as Guerrero – and probably took a worse beating – yet left the ring with his second loss at the venue. In the end, Guerrero, a former two-division titleholder, did what he set out to do – win his comeback fight. However, one wonders whether there might be a long term price to be paid for taking part in such a savage affair.

Devon Alexander: Jesus Soto Karass is no joke. The Mexican veteran is as tough as they come and a better boxer than some might think. And while Alexander had to work hard – who doesn’t against Soto Karass? — he had a fairly easy time in the 10-round junior middleweight fight at StubHub Center. The former two-division titleholder had his full arsenal on display. He outboxed Karass when he wanted to, jabbing, firing quick combinations and moving away before Soto Karass could react. And, when circumstances required Alexander (26-2, 14 KOs) to stand his ground, he got the better of some brutal exchanges in close. The only thing missing was punching power, as Soto Karass (28-10-3, 18 KOs) was never hurt. Thus, Alexander won a wide decision (97-93, 99-91 and 99-91). All in all, it was a good night for the St. Louis fighter, who was coming off a surprisingly clear decision loss to Shawn Porter that cost him his IBF 147-pound belt in December. Alexander is moving in the right direction again after his impressive performance on Saturday.

In another comeback fight, former light heavyweight champ Chad Dawson (32-3, 18 KOs) obliterated George Blades (23-6, 16 KOs), putting the journeyman down twice and stopping him at 2:35 of the first round on the Guerrero-Kamegai card. Dawson was coming off back-to-back knockout losses to Andre Ward (10th round) and Adonis Stevenson (first round), which threatened his career as an elite fighter, and hadn’t been in the ring for a year. It was a small step back but the result he wanted. Neither fighter made the 175-pound limit. … Heavyweight prospect Dominic Breazeale (11-0, 10 KOs) looked sharp in his third-round knockout of Devin Vargas (18-4, 7 KOs) at StubHub. The 6-foot-6½ 2012 Olympian is unusually quick and athletic for a man his size. It will be interesting to see how he fares against better opposition. … Fabian Maidana, the younger brother of Marcos, made his pro debut at StubHub. He defeated Eddie Diaz (also making his pro debut) by a unanimous decision in a four-round welterweight fight. First review? He doesn’t have the power of his sibling. … France had a good day Saturday. In Wilkes-Barre, Pennsylvania, French light heavyweight Nadjib Mohammedi (35-3, 21 KOs) upset Anatoliy Dudchenko (19-3, 13 KOs) by a seventh-round knockout in an IBF title eliminator. And, in Monte Carlo, Youri Kalenga (20-1, 13 KOs), another Frenchman, outpointed Mateusz Masternak (32-2, 23 KOs) in an important cruiserweight fight.