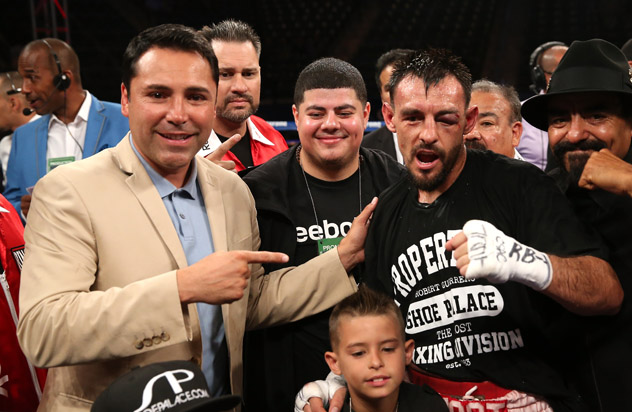 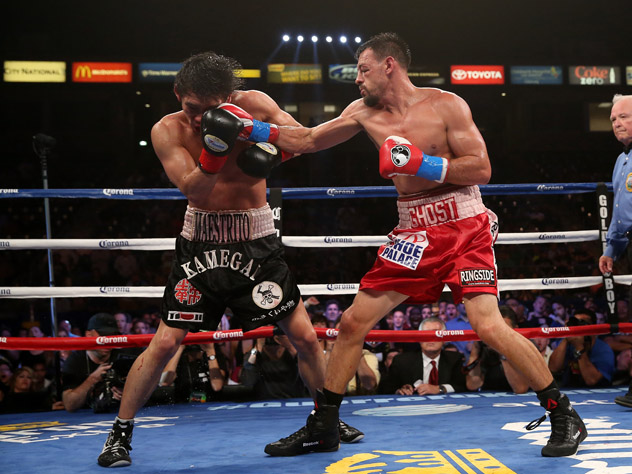 CARSON, Calif. – Robert Guerrero is back in the win column, but it was far from easy.

The former welterweight titleholder ended a 13-month absence Saturday with a hard-fought decision win over Yoshihiro Kamegai in a brutal war before 5,771 at the StubHub Center in the main event of Showtime Championship Boxing.

“It was a rough fight,” Guerrero admitted. “I didn’t want to get caught into his style, but right off the gate I did. I’m not a runner, I will fight. He is a tough, great fighter. I want to give the fans what they want.

“He hit me with a great shot to the left eye and I had to get right back up and keep fighting,” Guerrero continued. "There’s no backing down. … We will enjoy this win and then get back to seeing who is out there. My opponent came 100 percent better than what you see on TV because this is their opportunity to shine on a Showtime main event. This was his opportunity and he came to fight.”

The bout was Guerrero’s first since a one-sided loss to pound-for-pound kingpin Floyd Mayweather Jr. last May. However, he started fast, and there was little head movement, feeling-out period or feinting in this bout. The pair stood toe-to-toe, ripping power shot after power shot in a phone booth battle.

Their faces were the worse for wear. Kamegai’s lip was bloodied almost immediately. Guerrero’s left eye was busted open with bad swelling in Roud 6, and by Round 7, it was completely shut.

They dished out tremendous punishment, never allowing for a lull in the action. Guerrero blasted Kamegai (24-2-2, 21 KOs) with a two-fisted assault, and the tough-as-nails native of Tokyo, Japan, never wilted.

However, the pace slowed down in the late rounds, as the fighters humanly couldn’t keep up the frenetic pace. But they were recharged for the final round. The combatants even stepped it up a notch somehow, as they both went for broke in round they badly needed. Guerrero came out swinging with both fights, and Kamegai returned fire.

“I’m OK with the decision,” Kamegai said. “I get my fighting spirit form the fact that I traveled all the way here from Japan to win. That’s what kept me going throughout the fight — I really wanted to win. He shook me a couple of times and I felt weakened in the legs. But I think I had him hurt a few times too, but he recovered very well.”

Guerrero seemed to be in excellent condition, which he attributed to a new training regimen.

“I was in great shape, I took the shots very well because of the shape I am in because of CrossFit. I wanted to get on my toes but I fell right back into banging with him. I have been out for a year and its time to get back to work again. I am getting back in the gym right away.

The bout was expected to be an easy return bout for Guerrero, but with “The Ghost,” it’s never easy. Before the bout with Mayweather, Guerrero notably engaged in welterweight slugfests with Selcuk Aydin and Andre Berto.

Kamegai lost, but acquitted himself well, and likely will be welcomed back to Showtime with open arms. He makes for highly entertaining bouts, win, lose or draw.

Guerrero can look forward to a yet another meaningful fall fight, and with a bevy of top welterweights out there, the options should be plentiful.