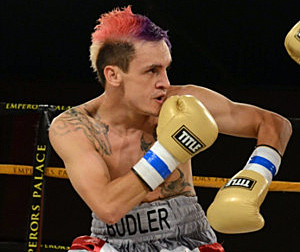 Even before Hekkie Budler turned pro, the South African strawweight standout dreamed of facing his accomplished compatriot Nkosinathi Joyi. He got that wish last June and made the most of it.

“It was a fight that had to happen and it was the turning point of my career,” Budler told RingTV.com. “Not many people thought I would win, but I believe in myself and I believe in (trainer) Colin (Nathan) and his game plan won us the fight.”

On Saturday he looks to make the first defense of that title when meets Thailand’s Pigmy Kokietgym.

“I think he is a tough fighter who brings in loads of experience,” said Budler when asked about his opponent. “I have seen his last few fights and I also saw his WBA world title challenge in 2010 in which he lost a split decision that I thought could have gone his way. He is strong and an aggressive fighter who comes to fight.”

Anson Wainwright – You face Thailand's Pigmy Kokietgym this Saturday. What are your thoughts on the fight and what he brings to this bout?

Hekkie Budler – I think he is a tough fighter who brings in loads of experience. I have seen his last few fights and I also saw his WBA world title challenge in 2010 (verses Kwanthai Sithmorseng) in which he lost split decision that I thought could have gone his way. He is strong and an aggressive fighter who comes to fight.

AW – It takes place as in Monte Carlo, you've only fought overseas twice previously, what are your comments on fighting there?

HB – I am excited to fight abroad and here in Monte Carlo. I have matured a lot since my last outing overseas in 2010 in a fight in which I felt was below par. Things have changed dramatically in my career for the better and I am looking forward to defending both my world titles on Saturday night.

AW – Tell us about your team?

HB – My team consists of my trainer and manager, Colin Nathan, who has been by my side since I turned pro. We share a very special bond and I think he is the best trainer in South Africa today. His assistant Vusi Mtolo and my cut man Bernie Paleman. I also have a strength and conditioning coach, Caz Abrahams, who I have been working with now for just over a year. I am promoted by Rodney Berman from Golden Gloves who is the best promoter in African boxing history. He has promoted me since day one.

AW – Your last fight was an impressive first-round stoppage of Karluis Diaz. Prior to that, you stopped Hugo Hernan Verchelli. Before those fights you weren't known for your power. How is that developing?

HB – Since I started with Caz, Colin instructed him to make my core stronger with better and more control with my rotational movements, so far it has worked out really well. Colin has made me also sit a lot more on my punches over the last four or five fights now.

AW – Your coming out party in many ways was when you beat Nkosinathi Joyi. It was a fight in which you were the underdog against a guy who had won a world title and was very well respected. Can you tell us about that fight with your fellow South African? How important it was for you and the belief you got from that win?

HB – It was a fight that I was dreaming of when I was still an amateur. I always said that Joyi was my hero and I always looked up to him. I remember nagging Colin even before I turned pro that one day he must make the fight between Joyi and myself even though at that stage I was fighting as a junior flyweight. It was a fight that had to happen and it was the turning point of my career.

When Colin called me up and said that Rodney had asked if we could make the fight I didn't even have to think twice. The game plan that Colin devised worked perfectly. Colin knew that Joyi was a converted southpaw (he asked one of his friends to ask Joyi for an autograph, and he signed with his right hand) and if you look at most of Joyi’s knockouts they all came from his right hook. Colin had me moving away from Joyi's right hand the wrong way to move against a “southpaw.” I also don't think Joyi could deal with my hand speed. Colin worked a lot with me turning and spinning and using lots of angles. In the end I confused Joyi with my movement and he could not adapt to movement which caught him off guard. Colin conned him at all the press conference telling him that we were going to go straight for him, which was so far from the truth. He said that if I made it to Round 6 it would be a miracle. Not many people thought I would win, but I believe in myself and I believe in Colin and his game plan won us the fight. The rest is now history.

AW – What do you think of the strawweight division and the current champions WBC Novoa, IBF Takayama and WBO Rodriguez Jr.

HB – I think they are all good champions. I would to fight all of them one day with all the belts on the line.

AW – You are the WBA 105-pound titleholder. What other goals do you have in boxing?

HB – I want to be remembered as one of the finest South African fighters in world boxing history. In the same mold as a Brian Mitchell, I would love to fight for THE RING magazine belt and unify my division and go down as one of the best strawweights in history.

AW – If we go back, what was it like for you growing up in Johannesburg?

HB – I came from a modest up bringing; born and raised in Newlands, Johannesburg where I live still to this day. I have a very strong support system with my family and fiancée Roxy Palm. They are constantly by my side with my Dad, Mom and sister as my biggest fans.

AW – How did you become interested and take up boxing?

HB – I played rugby, believe it or not, in primary school and we lost our first game. I was so cross and upset that I blamed everyone except myself. So a week later, my mother told me that I need to go to a boxing gym and do an individual sport so that if I lost, I only had myself to blame. I was 8 years old at the time.

AW – Tell us about your life away from boxing? I believe you have a love for snakes?

HB – I no longer breed pythons, Roxy made me sell my five pythons. They used to freak her out. I love playing my X-Box and relaxing during my down time. I am by heart a boxing fan so I love watching other boxing fights. Also enjoy spending time with my family.

AW – In closing do you have a message for the strawweight division?

HB – Hekkie Budler is the world champion. I am proud of who I am and the champion that I have become. I plan on staying on top until I am ready to retire. To all the other champions out there, I respect you guys but would love to fight and beat you.