Oscar De La Hoya: Mauricio Herrera is on a mission vs. Johan Perez 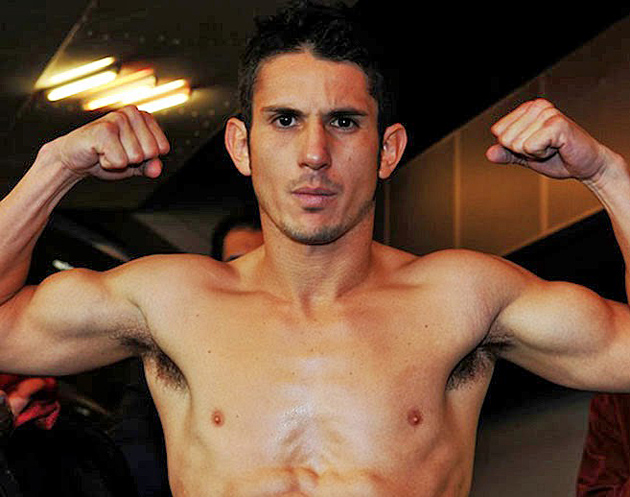 Golden Boy President Oscar De La Hoya said junior welterweight title challenger Mauricio Herrera heads into his July 12 clash with Johan Perez at the MGM Grand in Las Vegas "on a mission" in the wake of his disputed majority decision loss in March to RING 140-pound champ Danny Garcia, a bout that Herrera admits he still is troubled by.

"He's on a mission, and his style is suited for any fight that he's in," De La Hoya said during a Thursday conference call. "Whether he wants to box or wants to brawl or do whatever he wants to do inside of that ring."

Herrera (20-4, 7 knockouts) and De La Hoya discussed the fighter's setback against the undefeated Garcia as well as his upcoming bout with Perez (19-1-1, 13 KOs) that will happen on the undercard of the main event featuring junior middleweights Canelo Alvarez and Erislandy Lara on Showtime Pay Per View.

"He's in great shape, and I think that the fact that he's on a mission just makes for an exiting fighter and an exciting fight come July 12. Maurico does everything well," said De La Hoya.

"He can off-set you. He can fight you and he can box you. Mentally, he's going to beat you, no matter what it takes. He's obviously proved that with Provodnikov, and beating him. He's proved that with Danny Garcia, which was a fight where a lot of people had Herrera winning."

Herrera, who turned 34 last month, still aid laments the loss to Garcia, and views a dramatic victory over Perez as a means of thrusting himself back into contention for a potential return bout with Garcia, who also holds the WBA and WBC belts.

"I saw Mauricio winning the fight, but I think that Danny got the decision because he was local and the fight was in Puerto Rico," said Perez, who turned 31 on June 10. "So a victory over Mauricio would be very important, because that will show the world who Johan is, and that's what we're working for."

Below are some of Herrera's comments from the conference call addressing various subjects.

"Danny Garcia, you know, I'm not totally over that. It was frustrating for a while, and I still think about that fight. It's still frustrating and it's still in my head. It wasn't a surprise, the decision, either. Nobody really expected anything out of me.

"But I have a strong mind and a strong character, as you've seen in my fights. I can take a good punch. I hold all of that in, and I think that with Johan Perez, I may just have to let it all out in that fight."

On the potential for a knockout against Perez:

"We're looking for a stoppage. We want to stop Johan, if possible. We're going to look to make it an exciting fight. You know, I know that I can box all day, but I think that in this fight, I might want to switch it up a times.

"I may want to look for a stoppage of some kind. I'm not a power-hitter, but that doesn't mean that I can't stopp a fighter. Anything can happen in there.

"I'm looking forward to making it an exciting fight if there is not a stoppage in there. I want to put on an exiting fight and do that for the people. I am a boxer, but I try to fight within my style, and I know what I can do.

"The body attack is going to be very important, being that people say that I don't hit hard. I'm going to show him in there how I punch. It doesn't take a lot on the punch to go to the body. Anybody can go down from a body punch. It doesn't have to be that hard.

"So the body attack is something that we're working on, also, and we can use our power punches and get a stoppage as well, so we're gonna do things like that. But I think that I do very well with tall fighters, and you're going to see it that night."

On the potential pressure of being the favorite:

"It's an important fight, but there's no pressure. Like they were saying with the Danny Garcia fight, I'm ready. I'm always ready to give a great fight. I've got to fight a smart fight.

"I am going to give the people what they want to see, but I have to be smart in there. I can't give it away, but I've got to take some risks and make it a good, action-packed fight."