Russell-Lomachenko has boxing world’s attention, and deservedly so 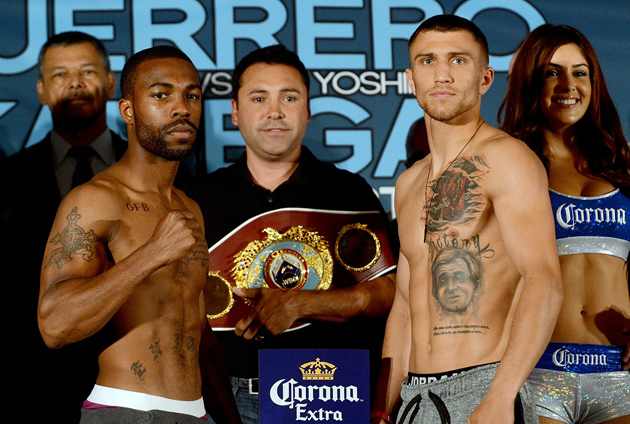 LOS ANGELES – Robert Guerrero’s ring return against Yoshihiro Kamegai is the main event of Showtime’s tripleheader this Saturday, but the fight on the Golden Boy Promotions card that everyone is talking about is the featherweight showdown between Gary Russell Jr. and Vasyl Lomachenko.

The second bout of Showtime’s telecast from StubHub Center in Carson, Calif., is for the vacant WBO title, but that’s not why fans and media can’t stop chattering about the matchup.

Russell, an undefeated boxer-puncher from Capitol Heights, Md., is represented by Golden Boy Promotions, which, until very recently, has had a bitter on-going feud with Top Rank Inc., the promoter of Lomachenko.

Russell (24-0, 14 knockouts) is managed by high-powered adviser Al Haymon and does not have a contract with Golden Boy Promotions, which recently parted ways with Richard Schaefer. Even before Schaefer officially resigned from his CEO position with Golden Boy there was speculation within the industry that he might form his own promotional company with all of Haymon’s unattached talent under its banner. It’s the kind of boxing industry back story that keeps the boxing Twitterverse tweeting, and for a lot of hardcore fans it make the outcome of the fight that much more interesting.

With all due respect to soccer and the World Cup, no sport can match the antagonistic tribalism of diehard boxing fans. They have to choose sides, but their loyalties aren’t limited to the fighters’ styles, personalities, national origin, culture or even race – no, these nut cakes get caught up in who manages or promotes a particular boxer.

However, actually picking a winner in this fascinating matchup of former amateur stars isn’t easy.

“I don’t know who wins this one,” said Robert Diaz, a matchmaker for Golden Boy who has had an active role in developing Russell since the 2008 U.S. Olympian turned pro.

“Obviously, I lean toward Russell because he’s with us, but mainly because he’s got 24 pro fights under his belt. Lomachenko was a great amateur, but two pro fights – even against the caliber of fighter that he’s faced – is still just two bouts. It’s not enough to be at the world-title level.”

That remains to be seen. Lomachenko, a two-time world amateur champion and two-time Olympic gold medalist, has a record of 1-1, with 1 KO, according to Boxrec.com. The Ukrainian southpaw is 7-1, according to Fight Fax, Inc., which includes six World Series of Boxing bouts (all five-rounders) that he took part in from January to May of last year.

Last October, Lomachenko made what was billed as his “pro debut,” when he stopped a fringe contender named Jose Ramirez in Round 4 of a scheduled 10-round bout on the Tim Bradley-Juan Manuel Marquez undercard. On March 1, he challenged Orlando Salido for the WBO featherweight belt. Salido, a rugged and relentless Mexican veteran, abdicated the title on the scales by coming in 2¼ pounds over the featherweight limit (126 pounds). However, Salido, who rehydrated to 147 pounds by fight night, used his extra weight to help impose himself on Lomachenko, who he roughed up over the first half of the bout.

However, although Salido won a split decision, Lomachenko impressed many fans and media by winning most of the late rounds and even rocking the brutish pressure fighter in Round 12.

“I got a very good lesson in (the Salido) fight,” Lomachenko said through manager Egis Klimas at an open workout at Westside Boxing Club on Wednesday. “That one fight gave me the impression and feel of what it is to be a professional boxer.”

“He says he got more experience fighting Salido than Russell has from fighting 24 ‘soft’ opponents,” Diaz said. “Maybe he’s right. It’s time to find out what Russell has against an opponent who is coming to win and who has the ability to do so. Russell can’t be ‘brought along’ any more than he has been.”

Many fans believe the lesser experienced professional in this matchup could be the more battle tested, but Russell disagrees.

“He and his team are overlooking the importance of getting rounds in,” Russell told RingTV.com on Wednesday. “He had one tough fight but he still only has 16 pro rounds. My team knows how important getting rounds is.

“If you look at my fights when I was 8-0 or 10-0 and compare them to my fights now, there’s difference. I don’t fight the same way. I’ve grown as a fighter. I’ve become a professional boxer because of those rounds I had to go.

“Lomachenko is still an amateur. His experience with Salido proved that he’s still very amateurish. He can’t handle pressure, he doesn’t have a lot of power, and he doesn’t throw enough (punches), although he is accurate. But he can be outworked, and he doesn’t have the ability to box with me from the outside because I’m too fast for him.

“If he tries to make it a tough fight and comes right at me fans will see a side of me they’ve never seen before.”

The fact that fans haven’t seen the “tough side” of Russell is the one knock against him. Fans haven’t seen him dig deep and fight hard the way Lomachenko did against Salido. He hasn’t had to given that the best opponents on his pro resume are B- and C-level fighters such as Leonilo Miranda and Vyacheslav Gusev.

Most fans who think Lomachenko can beat Russell are basing their opinion on the “intangibles” that the American standout may not possess.

Those who favor Russell are banking on the “tangible” assets the Beltway boxer has that Lomachenko simply can’t match – mainly phenomenal hand speed. Veteran boxing writer Steve Kim believes Russell is the most gifted boxer from the Washington, D.C. area since hall-of-famer Marc “Too Sharp” Johnson.

“I know he has very good speed. He’s much quicker than I am. I don’t even know what I’m going to do with his speed until I get in there with him. I faced some fast boxers in the amateurs but it was only for three rounds and I just did what I had to do to beat them.”

Lomachenko is being a bit modest. By doing what he had to do he beat everybody who was ever put in front of him during his storied amateur career, which included 397 bouts. Only one boxer, Russia’s Albert Selimov, beat him – in the finals of the 2007 world amateur championships.

Lomachenko avenged that loss in dominating and dramatic fashion in the opening round of the 2008 Olympic Games in Beijing, China, where he won the featherweight gold medal and earned the Val Barker Trophy for most outstanding boxer of the tournament.

Greg Beacham, a sports writer for the Associated Press, covered the Beijing Games and witnessed the Lomachenko-Selimov rematch, which he says is the greatest amateur performance he’s ever seen.

“You can’t overstate that performance,” Beacham said. “That was a star-making performance. We knew that Lomachenko was a special talent but the feeling was that he gotten a bad draw with having to fight Selimov – a more mature fighter and the one guy to beat him – in his first bout of those Games.

“But Lomachenko wasn’t intimated. He busted up Selimov for two rounds and had him completely frustrated. Then, when Selimov finally landed a good shot that knocked Lomachenko back on his heels in the third round, Lomachenko just smiled and motioned to him to bring it on like a movie star. This guy can do everything.”

Lomachenko says he might have to do a bit of everything to beat Russell, but don’t ask him to go into details.

“I don’t want to talk or think about it,” he said. “I just want to get in the ring and do it. People who know and understand boxing are going to get a good fight – one that they will remember for a long time.”

That’s high praise and very good company. Whether Lomachenko can equal Ward’s pro accomplishments or Golovkin’s pro acclaim depends on what he does against Russell on Saturday.