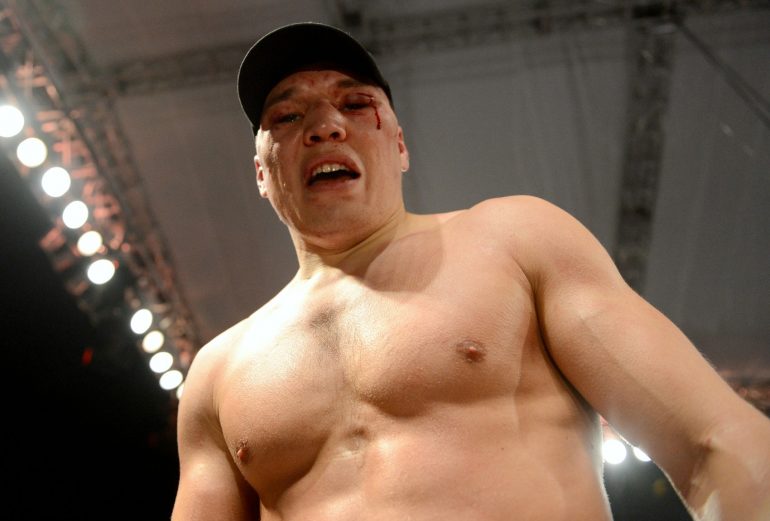 BROOKLYN, N.Y. — Ruslan Provodnikov has lost three times on American soil but after each of those losses, it was his rivals who were hospitalized with severe injuries, according to the punishing Russian pressure fighter.

The latest of those was Chris Algieri, whose right eye ballooned into a horrific hematoma from a hard left hook that caused the first of of the challenger's two first-round knockdowns enroute to a disputed split-decision victory that dethroned Provodnikov as WBO junioir welterweight beltholder on Saturday at Barclays Center.

Nicknamed "The Siberian Rocky," Provodnikov (23-3, 16 knockouts) lost by scores of 114-112 on the cards of Connecticut's Tom Schreck and New York's Don Trella, although California's Max De Luca had him winning 117-109.

Provodnikov expressed his disappointment during the post-fight press conference, long after Algieri (20-0, 8 KOs) had similarly addressed reporters before being taken to nearby Lutheran Hospital.

"All of the guys that I have lost to, they always go to the hospital after the fight," said Provodnikov, whose fight prior to Algieri was a 10th-round stoppage of Mike Alvarado, whom he floored twice in the eighth-round on the way to winning the belt in October.

"They go to the hospital as champions, and I think that's unfair. I think that there has been a lot of unfairness in my fights, and I'm not liking that a lot. I'm a little disappointed in that. Now that I was champion, I don't see how you can take a champion's belt by going to the hospital."

Before facing Alvarado, Provodnikov scored a 12th-round knockdown during a unanimous decision to then-WBO welterweight titleholder Tim Bradley in a March bout named "2013 Fight of the Year" by THE RING as well as the Boxing Writers Association of America.

Bradley said that he "pissed blood" after having fought Provodnikov, whose other unanimous decision loss was to Mauricio Herrera in January 2011.

"If you compare the fights, it was tough against Herrera, but in this fight, Algieri was getting beaten up all night. This is another opponent of mine who is probably going to go to the hospital right now, as Tim Bradley did. I never actually said that I was robbed in the Bradley fight, and I never have actually said that I was robbed in this fight. But I don't think that I lost this," said Provodnikov.

"Every time that I come to America, my mindset is that in order to win, that I have to knock the guy out. It's been like that for all of my career, and not just now. So that's not surprising, but it's my life. Maybe God's just testing me and it's part of what I have to go through in my life. It's not a big deal. It is what it is."

"We both went to the hospital after our fight, and we met up and took a picture together," said Herrera. "I had racoon eyes, but we were both pretty beat up. I had a fracture on the forehead, but it wasn't that big."

As for Algieri-Provodnikov, Herrera said he had "no problem" with the result, adding, "I didn't see it as a robbery or anything."

"I've watched the fight one time, and I didn't get a chance to really score it well. But by the looks of it, Chris did a good job," said Herrera. "It looked like he was doing well and winning a lot of rounds. I think that the fight was close that could have gone either way, but I guess I could go for Chris winning."

In addition to his bout with Provodnikov, Herrera was last in action losing by disputed majority decision to RING/WBA/WBC 140-pound champ Danny Garcia. Herrera has also suffered narrow decision setbacks to Karim Mayfield and Alvarado, the latter of whom Provodnikov floored twice in the eighth round of a his win.

"I don't see anything wrong with having Chris as the winner of that fight with Ruslan," said Herrera (20-4, 7 KOs), who will face Johan Perez on the July 12 undercard of a main event featuring junior middleweights Canelo Alvarez and Erislandy Lara. "I didn't see it as a robbery or anything, so I could go with that decision."

Below are a few scores taken from 11 boxing insiders:

"I had it 114-112 for Ruslan Provodnikov over Chris Algieri. I scored the first round, 10-7 for Provodnikov. I gave the gutsy challenger the second, third, fourth, fifth eighth and ninth. But on the official scoring, you might say Chris Algieri crept right up on him for the win."

"One can't let facial damage sway how a round is scored. It's all about what the fighter does during the course of each individual round, and when that factor is removed, Algieri's effort reflects better. I had three extremely close rounds, and two of those went to Provodnikov, mostly because one had to take the impact of his punches into account in those rounds.

"But on balance, Algieri did what he did best for longer periods than Provodnikov did during enough rounds, and that's why Algieri sneaked through on my card. This fight so very much mirrored what happened to Provodnikov against Mauricio Herrera, a similarly pesky fighter who also overcame severe facial damage to win a fight some thought he deserved to lose. History, in fact, repeated itself Saturday night. My score, nevertheless, was a draw."

"I mean, there was not one adjustment, and that's pretty simple. He spent the whole night trying to land the same big shot and that same big punch that he landed in Round 1, and that didn't happen for him. It just didn't happen."

"I scored Chris Algieri-Ruslan Provodnikov a draw at 113-113. Provodnikov landed the harder shots throughout the fight, as evidenced by Algieri's face, but he was outboxed down the stretch. I gave the last four rounds to Algieri."

"Put me down as 114-112 for Chris Algieri. I thought that with the injury, the fight was going to end fairly soon. I felt it was what you preferred more, Algieri's movement and boxing or Ruslan Provodnikov's aggression and pressure."

That said, Algieri was more successful implementing his gameplan. I was impressed by Algieri, but disappointed that Provodnikov, with having Freddie Roach in his corner, wasn't able to come up with a Plan B, like use the jab and create openings and not to just wing away."