Chris Algieri ‘ready for a Manny Pacquiao fight this year’ 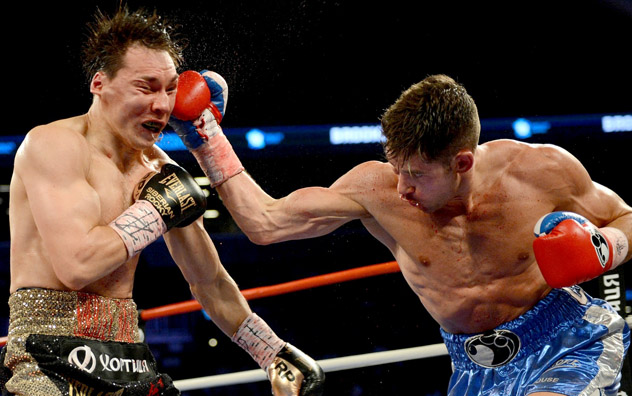 Chris Algieri is basking in the glow of Saturday's dramatic albeit disputed split decision victory that dethroned Ruslan Provodnikov at Barclays Center, having risen from a pair of first-round knockdowns and overcoming a slit of a right eye to earn the WBO's junior welterweight belt on HBO.

Provodnikov's chief cornerman, Freddie Roach credited the 30-year-old Algieri (20-0, 8 knockouts) for  "a ballsy fight," although the six-time "Trainer of The Year" believes his man won.

Algieri also earned the respect of fighters such as RING and WBC super middleweight champion Andre Ward and former two-division titlist Paulie Malignaggi, who scored the fight in his favor.

Algieri and his promoters, Joe DeGuardia and Artie Pelullo want the resident of Huntington, Long Island, N.Y., to challenge WBO welterweight titleholder Manny Pacquiao, who, like Provodnikov, is trained by Roach. Although Roach would like a return bout for Provodnikov against Algieri, he acknowledged, "I would have no problem getting Pacquiao ready to beat him."

Below are are some of the thoughts Algieri shared with RingTV.com on Monday regarding his performance, his injuries and his future.

Chris Algieri on a Pacquiao fight:

"Maybe Manny Pacquiao, so why not? I already fought the most dangerous guy around for very cheap, so now, let's go for the big guys and maybe that's Manny Pacquiao. I think that we have a lot of momentum right now and that the boxing world would like to see that. I think that they're probably going to be saying the same thing about that fight as they did about Provodnikov.

"I think that, stylistically, it's a good fight for me. I think that if we were to make that fight happen and if I were to prepare the right way and have everything go similar to how this preparation went for Provodnikov, that I would be ready for a Manny Pacquiao fight this year."

On the weight at which he would fight Pacquiao:

On the first round vs. Provodnikov:

"The only punch that hurt me that whole night was that first left hook. I didn't see it. I threw a sloppy left hook and I got caught with that hard shot. That put me down. My eye started swelling immediately. I felt a lot of swelling and a lot of tingling and my lip went numb. My legs were fine but I felt that it was swelling immediately and my top couple of teeth went numb.

On his vision from the right eye during the fight:

"I was good until about the eighth round. It was starting to affect me after the eighth. By the 12th, it was shut and I couldn't see. I got hit with a jab right at the beginning of the 12th round and from then on, it was shut.

"I felt like I stopped getting hit after the fourth round. After that, his shots were few and far between. Like I said, the first shot that really hurt me was that first shot."

On his hospital visit:

"I went to Lutheran. I didn't really get an official diagnosis yet because with the swelling, they wanted it to go down a little bit. So I'm going to go and have a follow-up tomorrow. But they checked out my retina and my vision, which is all good. We're just trying to figure out if there's any kind of fracture or anything going on. The swelling still is pretty intense, so we have to give it a couple of days to chill out.

"They did CAT Scan and X-rays and things and they said that it's kind of hard to tell right now, so they want to follow up and make sure that everything is A-okay and then, we'll go from there. Other than the eye, there is not a mark on me. I was more sore after the Taylor fight. I look like [Batman’s nemesis] Two-Face. If I turn my face to the left side, it looks completely normal but if I turn it to the other side, the other side is a mess."

"In the pre-fight press coverage, people were referring to and talking about Ruslan and his being from Siberia and that being such a tough place and a tough upbringing and how I came from the suburbs of Long Island, which is not a tough place. But I said toughness is in my blood.

"My mother is from Argentina; my father's Italian and that's two cultures that are ingrained in me. So I say that my toughness comes from inside of me, not how I was raised. I have that in my blood."

On his growing affinity with Argentines:

"I spent a couple of training camps out in Oxnard, Calif., with Marcos Maidana and he actually reached out to me on Twitter and congratulated me on the fight. He's a buddy of mine. Sergio Martinez is one of my favorite fighters to watch with his style and his attitude. A lot of the fans from Argentina are reaching out to me.

"I don't know if they're looking for a new Argentine champ or what but I think that a lot of Argentine fans are identifying with me and it's cool. It's an honor. I'm very ingrained with both of my cultures, the Italian and the Argentines. I grew up with my Argentine grandfather and grandmother, so that culture is very ingrained in my upbringing, so it's definitely an honor to be accepted by the Argentine fans."

On what he gained from watching Provodnikov's loss to Tim Bradley:

"I only saw part of the [Mauricio] Herrera fight but I'm not really big on studying tapes. I saw the Tim Bradley fight live and as soon as I saw that fight, I knew that I could beat this guy. I saw that double and triple-jabs give him trouble. I saw that he's open to the body.

On what detractors may have missed in the adjustments Algieri made:

"I think they may have been swayed by the swinging, winging shots that Ruslan Provodnikov was throwing later in the fight that weren't landing and even the ones that were landing later, they weren't the same kinds of punches that he landed in the first round. They weren't as hard and also, I caught the rhythm of them as I was rolling with them at the time. After the that first punch, he never hurt me again throughout the rest of the entire fight.

"Everything else, it was either him losing some power or also, I was moving with the punch or moving away from the punch. I caught the rhythm of the ring at that point. He was landing a lot of punches on the elbow. I actually think that he hurt his thumb because he threw at right hook to the body at one point and we had actually been working on elbow position on that. It hit funny one time and I actually saw him squeeze it and he didn't throw it too hard that much after that."

"You could see him pawing more, taking his time and looking for the bigger shots more than throwing every shot hard. So a lot of the punches that he was throwing, they just didn't have the affect even though they were big shots. People just kind of believe that since it's Ruslan, that it's power shots and they're hurting me but that's not the case. Yeah, in the first round, he was throwing big bombs and they were landing. But after that, even the punches that he did land, they were not the same as the one he was landing earlier."

On the post-fight locker room visits from fighters such as Paulie Malignaggi, Shawn Porter and Demetrius Andrade:

"Paulie was in the dressing room after the fight. He and Shawn Porter both stopped by, which was kind of funny. Andrade came by as well. Those guys all came in and gave me congratulations and gave me props. Paulie's been at my last couple of fights."

On Malignaggi and Andre Ward scoring the fight in his favor:

"Number one, those guys are good boxers who understand the 'Sweet Science' and number two, they're analysts. This is what these guys do. They watch these fights all the time and it's their job to break down the fights and to see what's going on. They have a fine eye for the subtleties of good boxing.

"I'm really happy that those guys came out publicly and said that they saw the things that I was doing in there that maybe the casual observer didn't see or doesn't quite see yet. Because high-level boxing is very subtle. It's defense and timing and rhythm and those kinds of things can be very difficult to grasp when you're watching boxing. That's what makes high-level boxing such a beautiful thing. The guys that do it really well, it's an art form."