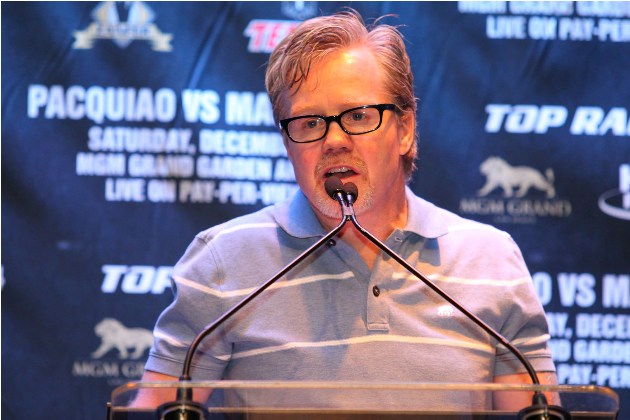 Algieri (20-0, 8 knockouts) won his belt with Saturday's scintillating yet disputed split-decision victory over Provodnikov, doing so after rising from a pair of first-round knockdowns, while bleeding profusely from his nose, and fighting as a veritable Cyclops throughout most of the bout due to a severe hematoma that arose beneath his right eye in the initial round.

"I admire the kid. He got up from a couple of knockdowns. He's got a lot of balls. He fought with a closed eye. A lot of guys would have quit. He's a tough kid," Roach said during the post-fight press conference at Barclays Center, site of the fight.

"I give him props on that. I thought we won the fight, but he fought a ballsy, ballsy fight. He fought hard. He did the best that he could. I've seen some tapes on him and he's a high calibre fighter. He's got a great reach and he's got a great jab."

Algieri and his promoters, Joe DeGuardia and Artie Pelullo, want the 30-year-old resident of Huntington, Long Island, N.Y., to challenge Pacquiao, who, like Provodnikov, is trained by Roach.

"I only want the big fights. We want them as big as we can get them. Ruslan Provodnikov is one of the most feared fighters in the game," said Algieri, during a Sunday interview with RingTV.com. "I just fought the most dangerous guy around for very cheap, and now, it's time for the biggest fight that I can get, and maybe that's Manny Pacquiao."

Pacquiao was last in action in April, dethroning Tim Bradley by unanimous decision to regain the belt he lost by split-decision to Bradley in June 2012.

"I'd rather like to see him fight a rematch first, and if he won it, and he won the fight clearly, then I think that he might deserve a fight like that," said Roach. "Yeah. For Pacquiao, there's not a lot of opponents out there right now."

An eight-division titlewinner, Pacquiao fought as high as the junior middleweight class, albeit, at a catchweight of 150 pounds — four below the division cap — for a unanimous decision victory over Antonio Margarito that earned the vacant WBC title in November 2010.

But Roach believes that Pacquiao would agree to drop in weight in order to challenge Algieri in a fight he believes is marketable despite Algieri's being relatively unknown.

"Algieri's a real nice kid and stuff like this. I've never heard of him before this fight, but now, he's sort of made a statement for himself. I don't know know if he's that big yet. He's still a 140-pounder moving up to 147 to fight Pacquiao," said Roach.

"Or maybe Pacquiao has been thinking about going back to 140. We've kicked that around a little bit if the right opponent comes. So possibly. Algieri's tall, rangy, maybe an awkward guy. I would have no problem getting Pacquiao ready to beat him."

First, however, Roach would prefer Algieri grant a return bout to Provodnikov, who won, 117-109 on the card of California judge Max DeLuca, but lost the fight due to the identical scoring of 114-112 in favor of Algieri by judges Don Trella and Tom Schreck of Connecticut and New York, respectively.

Roach did, however, tell Provodnikov "This is way too close" between the 10th and 11th rounds, adding, "We need a knockout here, let's put pressure on him."

Roach wants the rematch to happen somewhere other than New York.

"I think if we were somewhere neutral [for the rematch,] that would work. Or maybe we could do a rematch in Russia," Roach said with a chuckle.