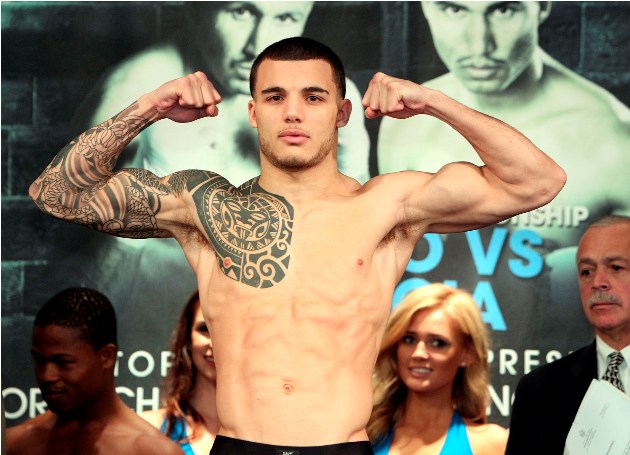 The 24-year-old Tapia (21-1, 13 knockouts), of Passaic, N.J., is coming off Saturday's 82-second knockout over Keenan Collins at Bally's in Atlantic City, the town where Tapia had lost his previous fight in December by sixth-round stoppage to James Kirkland.

"Glen's going to be fighting Boyd Melson on the Golovkin undercard, and it will be on HBO's international broadcast," said Lynch. "We're excited to be in this type of an exciting fight after his performance last night. This was the best that I've ever seen Glen look. He was really powerful and really strong."

A 32-year-old southpaw, Boyd Melson (14-1-1, 4 KOs), of New York City, is 6-0-1 since suffering his lone defeat by unanimous decision to Delen Parsley in March 2012, and was last in action for a majority decision over Donald Ward in February.

Tapia had spent his past nearly two months training alongside four-division titlewinner Miguel Cotto and former WBO junior welterweight titleholder Ruslan Provodnikov under the guidance of six-time "Trainer of The Year" Freddie Roach at the latter's Wild Card Boxing Club in Hollywood, Calif.

Tapia said that he was inspired by "watching a teammate" Cotto's 10th-round knockout on June 7 that dethroned Sergio Martinez as RING and WBC middleweight champion, and cat the six-time "Trainer of The Year"'s Wild Card Boxing Club in Hollywood, Calif.

Roach was not in Tapia's corner, however, as the fighter was guided by an assistant to Roach in Ernie Zavala and veteran cutman Miguel Diaz. Meanwhile, Roach was with Provodnikov when the Siberian fighter was dethroned as titleholder following a split-decision loss to Chris Algieri, who rose from two first-round knockdowns Saturday at Barclays Center in Brooklyn.

"We're so happy to have Freddie training Glen. Freddie has asked us to take a week off and then to get right back to work, so Glen will be back in Los Angeles next Monday," said Lynch. "This has been a learning process every day, and we're excited to see where we're going with it."