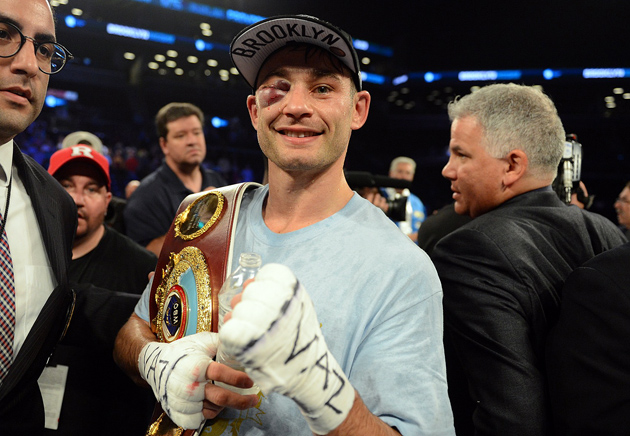 Pelullo, the promoter of Provodnikov, has three options on Algieri as part of the deal for the HBO-televised fight with Algeri's promoter, DeGuardia of Star Boxing.

A 30-year-old resident of Huntington, Long Island, N.Y., Algieri (20-0, 8 knockouts) won praise as "the better man" from RING and WBC super middleweight champion Andre Ward after rising from two first-round knockdown and enduring a right eye through that was reduced to a slit as well as a bloody nose against Provodnikov (23-3, 16 KOs) at Barclays Center in Brooklyn, N.Y.

"I only want the big fights. We want them as big as we can get them. Ruslan Provodnikov is one of the most feared fighters in the game," said Algieri.

"I just want fought the most dangerous guy around for very cheap, and now, it's time for the biggest fight that I can get, and maybe that's Manny Pacquiao."

Pacquiao was last in action in April, dethroning Tim Bradley by unanimous decision to regain the belt he lost by split-decision to Bradley in June 2012.

If not Pacquiao, said Pelullo, then he wants Garcia, an unbeaten fighter who hails from Philadelphia and who has won two of his past four bouts at Barclays Center.

"Right now, like Chris and I said, we want the biggest fights possible. First, down the road, it's Pacquiao, and then maybe Danny Garcia," said Pelullo, who would like to target Garcia-Algieri at Barclays Center.

"For Chris and Danny Garcia to unify titles in that building, with Garcia being from Philly, and Chris being from up here, we would sell 15,000 tickets."

DeGuardia said that Top Rank CEO Bob Arum, who promotes Pacquiao, had alluded to a Pacquiao-Algieri fight being more attractive if Algieri was successful against Provodnikov.

"I think that it's a realistic fight. I don't think that it would be that difficult of a fight to make. Bob and I have done a lot of business. I think that Bob hit it right on the head, and that's that this was going to be that type of a fight," said DeGuardia.

"Bob said, right from the get-go, that it was going to be a great fight between Algieri and Pacquiao if Algieri beat Provodnikov. Now, after this performance, that's magnified. I think that Chris really showed that he's got the credibility to be where he's supposed to be."