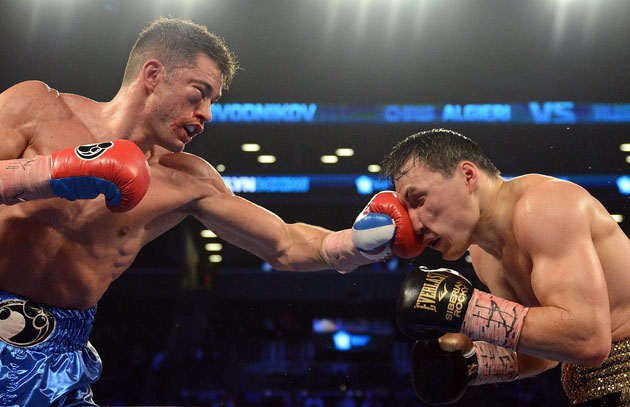 BROOKLYN, N.Y. — It’s about a 38-mile, one-hour trek from Huntington, Long Island to Brooklyn’s Barclays Center. To Huntington native Chris Algieri, he must have felt light years away from home when he stepped through the ropes to take on power-punching Ruslan Provodnikov before 6,218 fans Saturday night on HBO’s Boxing After Dark.

Fresh off of victories over the likes of Emmanuel Taylor, Wilfredo Acuna and Mike Arnaoutis, Algieri was indeed stepping into another world against WBO junior welterweight titlist Provodnikov, fresh off of stopping Mike Alvarado and giving Tim Bradley hell.

But Algieri promised he’d make a name for himself. He promised he would shock the world—and he did, scoring a split-decision victory over Provodnikov (23-3, 16 knockouts), and wresting the WBO junior welterweight belt from the “Siberian Rocky,” according to judges Don Trella and Tom Schreck, who each scored it 114-112 for Algieri (20-0, 8 KOs), while judge Max DeLuca had it 117-109 for Provodnikov.

After the first, where Provodnikov dropped Algieri twice, Trella gave Algieri seven-straight rounds. Schreck gave Algieri four of the last six rounds. DeLuca, apparently, saw a far different fight, as did THE RING, which scored it 114-112 for Provodnikov, who most at ringside felt won.

Provodnikov’s promoter, Art Pelullo, will no doubt demand a rematch. There was rampant speculation prior to the fight that Provodnikov would take aim at junior welterweight world champion Danny Garcia, and the ideal venue would be at Barclays Center again. It’s a fight that certainly holds no cache now.

“I congratulate Chris Algieri on his win—but I have nothing more to say,” Provodnikov said immediately after the fight.
Algieri was elated.
He threw a total of 993 punches and landed 288 (29-percent) to Provodnikov’s 776 punches thrown and 205 connecting (26-percent). Provodnikov connected on 41 of 341 jabs (12-percent), while Algieri landed 111 of 566 jabs (20-percent). Algieri even outlanded Provodnikov in power punches: 177-427 (41-percent) to Provodnikov’s 164-434 (38-percent).
Before anything, Algieri had to survive the first round. The Siberian Rocky, from Beryozovo, Russia, had to get by Algieri’s long arms and keen boxing ability. Algieri, who possesses a bachelor’s degree in healthcare science, may have questioned how healthy it was to take punches from Provodnikov.
Algieri’s goal was to outbox and stay away from the stalking Provodnikov. Sticking with the Rocky theme, Provodnikov entered the ring with “Eye of the Tiger” blaring. His gameplan is no mystery. That was to come forward, get inside and corner Algieri, eventually breaking him down.
It didn’t take long. 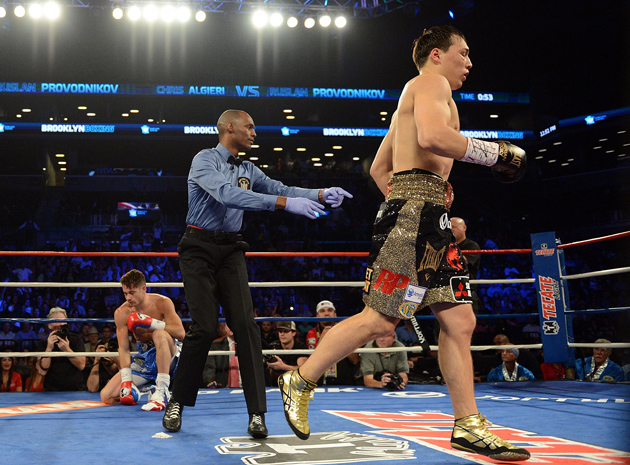 In the first round, Provodnikov dropped Algieri twice. Provodnikov did what was expected. He tracked Algieri down like a hunter looking for prey. He slammed two chopping rights into Algieri’s body, while the Algieri attempted to stave Provodnikov off with the jab. It had little effect.
A straight Provodnikov left felled Algieri with the first knockdown. Algieri took a knee in the final 15 seconds of the round after being stunned by another left to the head.
“Getting out of the first round, after a slow start, I thought was the key to my success,” Algieri said. “But I figured out his rhythm, and that was another key to my success. I took a knee because I wanted to clear my head and to make sure my eye was okay.”
The 30-year-old Algieri moved a little better in the second, but Provodnikov still got the better of him. Though it seemed a matter of time, as Provodnikov kept loading up on the left hook.
After losing the first three rounds (on THE RING'S scorecard), Algieri, his right eye swelling, began using a little distance and finding his jab. The fourth was Algieri’s best round, yet he couldn’t have been filled with too much confidence. After nailing Provodnikov with a few jabs, Algieri was greeted with Provodnikov’s black gum shield through a smile.
More danger lurked for the game Algieri in the fifth. Provodnikov nailed Algieri with a left hook right before the bell ended the round. Referee Harvey Dock took a good look at Algieri, his right eye closing and his nose pouring blood, between the fifth and sixth rounds.
“[Provodnikov’s] shots in the first four rounds were few and far between,” Algieri said. “I saw pretty well out of my eye until the eighth round, but after that I was blind by the 12th round. I was able to anticipate his left hook and I showed the world who Chris Algieri. As heavy as this belt is, I don’t even feel it.”
By the seventh, Algieri’s right eye appeared to be swelling shut, making it all the more difficult to catch Provodnikov’s sweeping left hook. By the eighth, the eye was a black slit.
With chants of “Algieri, Algieri, Algieri” spurring him on, Algieri landed possibly his best shot of the fight in the ninth, raining a right down on Provodnikov’s slightly bowed head. If Algieri had a little more power, who knows how non-controversial this fight would have been. But Algieri was making what appeared to be an early route into a fairly competitive fight—and he was doing it with basically one eye.
There was , however, a theme growing. Provodnikov seemed to taper off, while Algieri gained strength throughout the fight. Provodnikov’s punch output diminished while Algieri was more active—active enough for two of the three judges to make a surprise victor of the local boy.