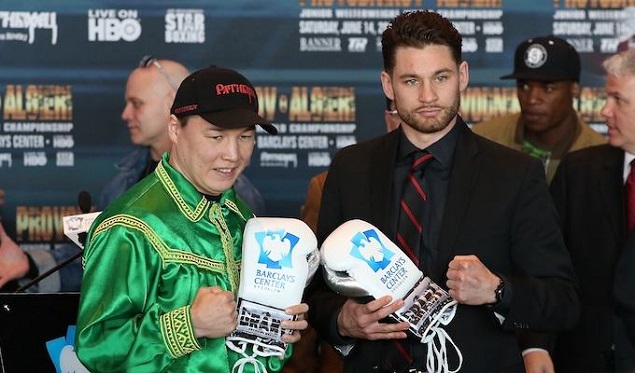 RingTV.com has a live, round-by-round update of Saturday's 140-pound bout during which Chris Algieri rose from two first-round knockdowns to score a dramatic upset split-decision victory over WBO titleholder Ruslan Provodnikov at Barclays Center in Brooklyn on HBO.

Provodnikov (24-3, 16 knockouts) was coming off a 10th-round stoppage of Mike Alvarado, whom he floored twice on the way to winning his belt in October.

Algieri (20-1, 8 KOs), who stands 5-foot-10 to Provodnikov's 5-6, had correctly expressed confidence that he could duplicate the efforts of Bradley and Mauricio Herrera, the latter whom defeated Provodnikov by unanimous decision in January 2011.

Provodnikov enters to Survivor's "Eye  Of The Tiger!!!"

Algieri greeted with rousing cheers, Provodnkikov, booed with a mixture of cheers.

Round 1:  Round one was telling early. Provodnikov landed two early right hands to the body. Make that three and then four, all with the right hand. Double-right hand and two left hooks from Algieri that have little affect. Provodnkiov still is coming. Left to the body and left to the head both by Provodnikov. Right uppercut from Algieri, who gets off two more rights in a brief clinch. LEFT HOOK DROPS ALGIERI. HE'S UP, BUT HIS RIGHT EYE ALRDADY IS CLOSING UNDERNEATH. Algieri GOES DOWN, YET AGAIN, FROM ANOTHER LEFT HOOK, MORE OR LESS TAKING A KNEE.  He's up, yet again, but Provodnikov is on him. Provodnikov, 10-7.