Provodnikov as motivated for Algieri as he was for Bradley, Alvarado 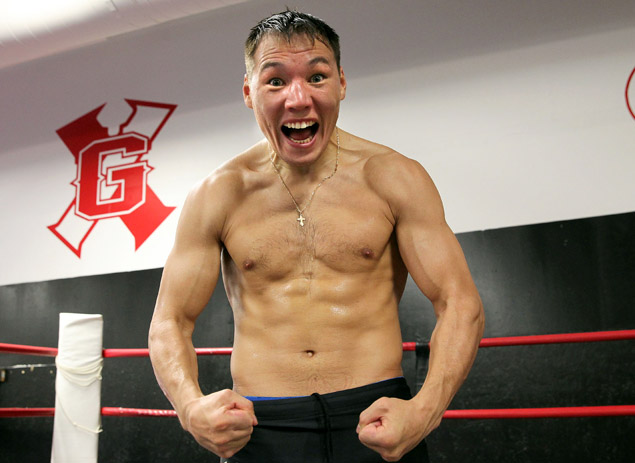 Ruslan Provodnikov is not motivated by money. Untold wealth and making Forbes Magazine’s list of the world’s richest athletes does not get his engine revving. The WBO junior welterweight titleholder isn’t overly obsessed with the hardware, trinkets and baubles that denote you’re the best in the world.

Provodnikov only cares about one thing – putting on an exciting show that thrills his fans.

He will get that opportunity when he defends his title against Chris Algieri, a 30-year-old contender from Huntington, Long Island, at Barclays Center in Brooklyn on HBO’s Boxing After Dark on Saturday night.

As simple as it sounds, that one little thing – putting on an exciting show – has made Provodnikov one of the hottest TV boxers in the sport today. His epic battle against Timothy Bradley, voted the 2013 Fight of the Year, burst off the screen like high definition lightning. He followed that up with another scintillating performance against Mike Alvarado, picking up the WBO title in the process.

“Provodnikov has the consummate telegenic style,” said Peter Nelson, vice president of programming at HBO Sports. “His nickname Siberian Rocky could not be more apt. He comes to fight and he comes to win. He’s willing to get hit three times if necessary to deliver one shot. But under the tutelage of Freddie Roach he’s cut down on how much he gets hit and has increased how much he hits back.”

Sometimes it is difficult for a boxer who has been involved in high profile matches against opponents like Bradley and Alvarado to be motivated against a low profile contender like Algieri. Provodnikov is supposed to win, so a victory would be a mere formality. The pressure is on to win in spectacular fashion. That could be difficult against a boxer like Algieri, who realizes his best chance of winning is to keep his distance and not engage in a toe-to-toe slugfest.

“My job is to chase Algieri and hunt him down,” Provodnikov said. “He should be more worried about me. His style of fighting is not my favorite. I prefer an opponent who likes to engage and fight toe-to-toe, not a runner. I don't have trouble with runners. They have trouble with me.”

Being a blood and guts ring warrior doesn’t make for the professional longevity of Bernard Hopkins. But that’s fine with Provodnikov.

“I am focusing on a shorter, more prominent career. I only want the big fights. The fights the fans want to see,” Provodnikov said. “I want to make an impact and leave. I do not want to outstay my welcome in boxing. Money has never been my primary goal. I want to make the most out of my abilities to be my best in the ring. The respect of the fans and my achievements mean more to me than a title belt.”

That’s a nice plan of action for an all-action fighter like Provodniknov. But the problem is Provodnikov’s style makes it unlikely a string of big name boxers in the 140-pound division will line up in front of the sign that says: “I Want Ruslan Next.”

That is the biggest dilemma for Provodnikov, who will be headlining the first major show of his career on Saturday night.

Pellulo said Algieri has a better chance of getting a match against Manny Pacquiao if he wins than Provodnikov does if he wins.

“That’s one of the main problems is that they’re both trained by Freddie Roach,” said Vadim Kornilov, Provodnikov’s manager. “If that’s the fight that everyone wants to see then there is no other option.”

If it happens, Roach said he might have to sit it out and watch it on television at home.

Kornilov said there are still plenty of good fights on the horizon for Provodnikov – Juan Manuel Marquez, a Bradley rematch, Brandon Rios and even Floyd Mayweather. OK, that one is a long shot. But Kornilov’s point is you never know.

“Provodnikov’s brand is he’s willing to fight anyone,” Nelson said. “That in itself will attract a certain caliber of fighter who wants to be known as the kind of fighter who is willing to take on the fearless guy toe-to-toe. Whether it’s the Provodnikov, (Gennady) Golovkin, or (Sergey) Kovalev, the guys on the other side of the equation get the fans respect. I think there’s an appeal in getting that kind of respect from a street cred standpoint. Plus, he’s got a world title.”

Provodnikov is continuing to develop and evolve as a boxer. So the longer those big names wait, the more complete boxer they will get. Nelson said he has seen how Provodnikov has grown since he started working with Roach two years ago.

“The sparring with Manny, combined with the training of Freddie Roach has done a lot to transform his style and his presence of mind in the ring and his approach to boxing,” Nelson said. “You could see the changes between the Bradley fight and the Alvarado fight. For a fighter to be able to integrate more tools into his Swiss Army knife after just one fight is rare. For him to be able to do that and put it into practice in a guy’s hometown in front of 10,000 screaming fans like he did against Alvarado is tough to do. But Provodnikov was able to do pull it off.”

“It's my character. And I'm probably never going to fight differently,” he said. “And people love me probably because of that, and of who I am. I am who I am in the ring and I just put everything in the ring. It's who I am.”

“This is a very important fight to me because it will show how many fans I can attract,” Provodnikov said. “Brooklyn feels like a second home. I hope Barclays Center can become my home arena in the same manner Miguel Cotto has at Madison Square Garden.”