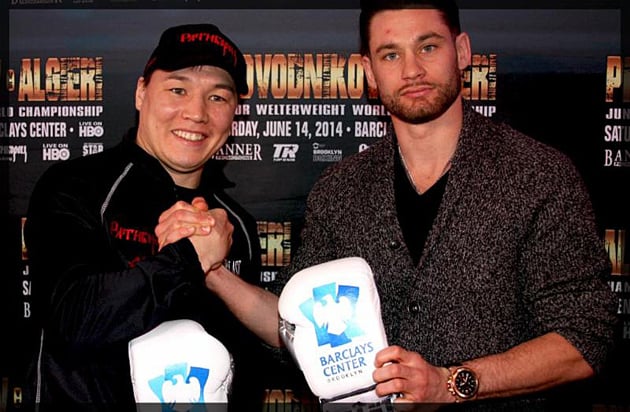 WBO junior welterweight titleholder Ruslan Provodnikov and challenger Chris Algieri weighed in at 139.8 and 140 pounds, respectively on Friday in advance of their HBO Boxing After Dark main event on Saturday at Barclays Center in Brooklyn.

Nicknamed "The Siberian Rocky," Provodnikov (23-2, 16 knockouts) was last in the ring for a 10th-round stoppage of Mike Alvarado, whom he floored twice on the way to winning his belt in October.

Before facing Alvarado, Provodnikov scored a 12th-round knockdown during a unanimous decision loss to then-WBO welterweight titleholder Tim Bradley in a March bout named "2013 Fight of the Year" by THE RING as well as the Boxing Writers Association of America.

Algieri (19-0, 8 KOs), who stands 5-foot-10 to Provodnikov's 5-6, has expressed confidence that he can duplicate the efforts of Bradley and Mauricio Herrera, the latter whom defeated Provodnikov by unanimous decision in January 2011.

"I don't think that Ruslan has fought a guy similar to me in terms of my size, my athleticism and my speed and just my skill set," said Algieri. "So it's really going to come down to who can fight their fight at the right time and at the right place in the ring."

For the co-feature, WBO junior middleweight titleholder Demetrius Andrade and challenger Brian Rose weighed 153.8 and 153.4, respectively. For one of the undercard bouts, light heavyweight Seanie Monaghan and Elvir Muriqi weighed 174.8 and 176.8, respectively.

ROSE IS CONFIDENT OF BEATING ANDRADE

Rose, 29, has won 11 straight fights, three by knockout, since being stopped in the sixth round by Max Maxwell in May 2010. In his last bout in October, Rose won a split decision over Javier Maciel, who was last in action with a unanimous decision win over Jorge Melendez on the June 7 undercard of Miguel Cotto's 10th-round knockout of Sergio Martinez.

"I refuse to give up even through the tough times. Getting KO'ed was the lowest point of my career and I couldn't see a way back," said Rose. "I picked myself up, brushed myself off and here I am fighting for a world title in the U.S. against a world-class fighter. It doesn't get any better than this."

Andrade, 26, rose from a first-round knockdown to earn the vacant belt by split decision over previously unbeaten Vanes Martirosyan in November.

"Out of all of them, Andrade is the weakest of the world champions at light middleweight but he is a world champion. I have a chance in this fight and I haven't come over here to get beat and just make up the numbers. I'm here to take the chance that I have earned and I am positive that I am going to come home with a world title. I am going to enjoy the experience, of course. How could I not? I am fighting in New York for a world title. This is the big time. It's an amazing venue and I've never boxed somewhere as brilliant as this," said Rose.

"But I am here to do a job. I've been out here for a while and I have not put any pressure on myself. People don't expect me to win and I don't care about that. This is a tough task. I'm under no illusions. I'm a realist but I believe in myself and I have a team behind me that know I am capable of winning this, so it's not a case of proving doubters wrong but proving those people that have believed in me from the start right. Every boxer always says it's the best camp they have ever had and it's true for me. I'm injury-free; I've sacrificed more than ever and I cannot be any fitter or more tactically prepared for this fight. I've done everything right.