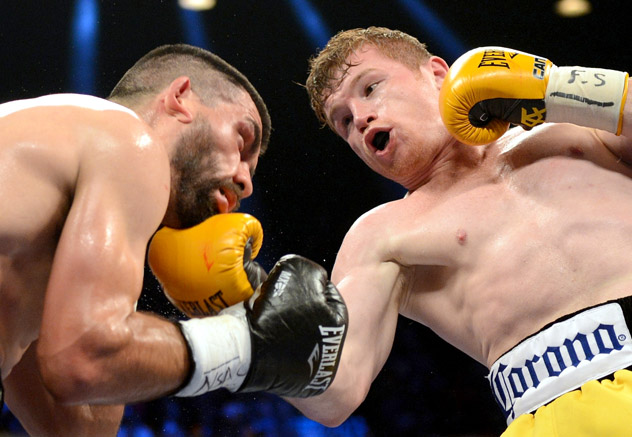 Although Saul Alvarez's focus is on his July 12 clash with Erislandy Lara at the MGM Grand in Las Vegas, the 23-year-old Mexican junior middleweight understands the magnitude of a potential bout with Puerto Rican, four-division titlewinner Miguel Cotto.

"Without a doubt, that's a huge fight with the fact that he's from Puerto Rico," said Alvarez, from his training facility in San Diego on Thursday. "That would be one for the history books for the boxing game alone."

Alvarez's sentiment comes on the heels of that from Golden Boy Promotions President Oscar De la Hoya, who said Cotto "looked sensational" during his 10th-round technical knockout of Sergio Martinez on June 7 for THE RING and WBC middleweight championships and that he would like to match Cotto against Alvarez (43-1-1, 31 knockouts) should the latter defeat Lara (19-1-2, 12 KOs), 31, of Cuba.

"Definitely, without a doubt, that's something that people want to see," said Alvarez of Cotto, who dropped the southpaw Martinez three times in the first round and once more in the ninth.

"So if that were to happen, well, definitely, that would be a huge fight. But at the moment, I've got an obligation pending at the moment and that's Erislandy Lara and that's my primary focus."

Cotto had fought at junior middleweight since 2010, moving up to a catchweight of 159 pounds for the first time to become the first Puerto Rican fighter to win a fourth title in as many weight classes.

"I would love to work with Cotto Promotions on a possible 'Canelo'-Cotto fight," De la Hoya told RingTV.com after Cotto-Martinez. "July 12 is very important toward possibly seeing the pugilistic rivalry between Mexico and Puerto Rico once again. It would be Salvador [Sanchez] vs. [Wilfredo] Gomez, [Julio Cesar] Chavez Sr. vs [Edwin] Rosario, De la Hoya vs. [Felix] Trinidad. Huge!"

Prior to facing Martinez, Cotto looked sharp and powerful stopping Delvin Rodriguez in an October victory to bounce back from consecutive majority and unanimous decision losses to Floyd Mayweather Jr. and Austin Trout in May and December 2012, respectively.

In November, Cotto turned down a deal worth in excess of $10 million to face Alvarez. So instead, Alvarez's next fight was a 10th-round stoppage of Alfredo Angulo in March that helped him rebound from a majority decision loss to Mayweather last September.

Before Mayweather, Alvarez unanimously decisioned the previously unbeaten Trout, flooring him in the seventh round of their bout in April 2013 that drew nearly 40,000 to the Alamodome in San Antonio.

An Alvarez-Cotto bout could be a monster event given Alvarez's loss to Mayweather grossed a record $150 million and Cotto is widely considered the most lucrative pay-per-view attraction in boxing behind Mayweather and Manny Pacquiao.

"I understand the questions about Cotto because, obviously, that's boxing. In this sport, I know that's the name of the game," said Alvarez. "Obviously some people were surprised that I took the fight with Lara and when I was successful at getting it and the fight comes, it's always about future fights."

Lara's past two wins were a 10th-round knockout of Angulo, during which Lara was floored once each in the fourth and ninth rounds last June, and a unanimous decision over Trout, whom he dropped in the 11th round in December.

"My primary focus right now is Erislandy Lara," said Alvarez. "That's my next fight on July 12 and I'm going to demonstrate my focus then."