Yuriorkis Gamboa to ‘use my speed, attack’ Terence Crawford 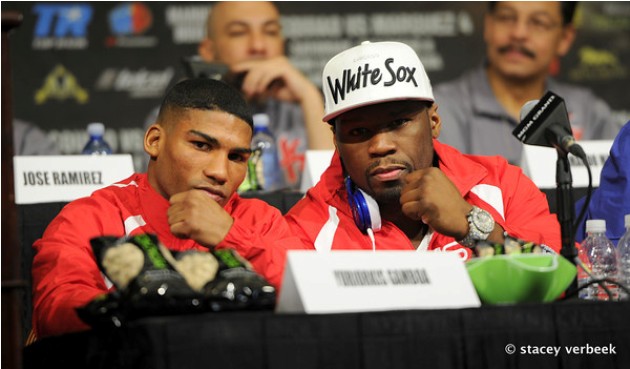 Unbeaten Yuriorkis Gamboa plans to "use my speed" and "attack from the start" against WBO lightweight titleholder Terence Crawford in their June 28 bout at the CenturyLink Center in Crawford's hometown of Omaha, Nebraska.

"I think this will be a counter vs.counter match. My objective is to get him to the middle range where I can use my speed," said the 32-year-old Gamboa, a former Cuban Olympic gold medalist who is working "on defense and counter-punching" with trainer Floyd Mayweather Sr. "I know I tend to put my hands down and we worked on that. The game plan is to attack from the start, be on the defensive and develop the fight from there."

On Thursday, Gamboa (23-0, 16 knockouts) shared his thoughts about Crawford (23-0, 16 KOs), 26, from his training facility at Iron Mike Promotions Gym in Deerfield Beach, Fla., in a release.

Coming off a dominant title-winning decision over Ricky Burns in Glasgow, Scotland in March, Crawford's bout with Gamboa represents the first title fight in Omaha since heavyweight champion Joe Frazier beat Ron Stander in 1972, with Crawford being the state's first titleholder since Perry “Kid” Graves won the vacant welterweight crown in 1914.

"At this point, we have nothing to lose," said Gamboa, of facing Crawford's partisan fans on fight night. "We fight whenever, wherever."

"After this fight, sitting with SMS, we're looking for a fight with Garcia or someone of that stature," said Gamboa, whose promoter is Curtis Jackson, also known as 50 Cent, of SMS Promotions.

"We have had a great career; of course, nothing is perfect…This is a great opportunity to show the people that Gamboa, 'The Hurricane of Guantanamo' is here."