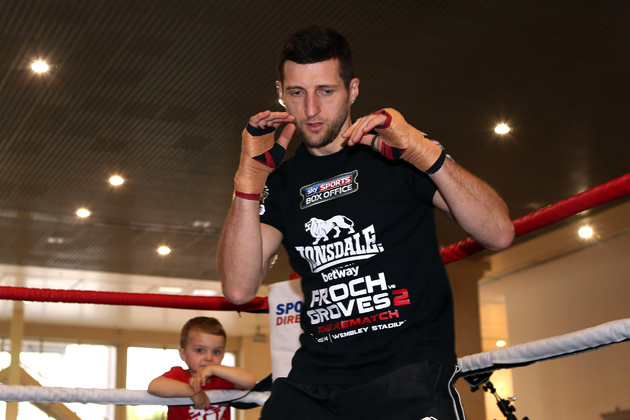 Arum said he and Top Rank Vice President and matchmaker Carl Moretti spoke to Froch's promoter, Eddie Hearn of Matchroom Sport earlier this week regarding the potential for a fight between Froch (33-2, 24 knockouts), who turns 37 next month, and Chavez (48-1-1, 32 KOs), who turned 28 in February.

"I've talked to Eddie Hearn and we talked at length, Carl Moretti and myself on Monday," said Arum. "We went through all of the permutations and had conversations and we reviewed the revenue streams and so forth and he's going to be getting back to us."

Arum said Hearn will be in Brooklyn as the promoter of junior middleweight Brian Rose, who will challenge WBO beltholder Demetrius Andrade at Barclays Center on the undercard of a main event featuring WBO 140-pound titleholder Ruslan Provodnikov against Chris Algieri.

"Eddie will be in Brooklyn this weekend because he has Rose fighting Andrade. So he and Carl will talk and they will call me up," said Arum. "Hopefully, we'll have some sort of tentative understanding but it is only at that point that I can make a proposal to Chavez on the prospect."

Although Arum's relationship with Chavez and the fighter's manager, Billy Keane had soured over their failed negotiations for a potential bout with unbeaten WBO middleweight titleholder Gennady Golovkin, Arum said that he is attempting to work with both in order to make the bout with Froch.

"Where it's at now is that I'm talking to Eddie Hearn about a Froch-Chavez fight and if we reach some understanding with Eddie, then I'll make a proposal to Chavez and if he wants me to send it to Keane or anybody else, then of course, I will do that," said Arum, dismissing reports that he was attempting to bypass Keane in order to deal with Chavez's father, the legendary former champion Julio Cesar Chavez Sr.

"I was trying to set up a meeting at my house over the weekend between myself, Chavez and his father, not to discuss contracts. The kid says that he can make 160 but he doesn't have a trainer or anybody of a technical nature. So the only guy that I can rely on that knows boxing is Chavez Sr. but I have no intention of going over a contract with Chavez Sr. I wasn't talking about a contract. If he wants to me to send the proposal to a lawyer or to a manager, we'll do whatever he wants. Of course, I would do that."

Froch was last in the ring on May 31, when he knocked out George Groves in the eighth round of their rematch. In November, Froch had to rise from a first-round knockdown to secure a disputed ninth-round stoppage over Groves.

Since falling to RING super middleweight champion Andre Ward by unanimous decision in their December 2011 bout for the RING, WBA and WBC belts, Froch has won five straight fights, four by knockout.

THE RING’s number one-rated 168-pounder, Froch first faced Groves after having earned a unanimous decision over ex-beltholder Mikkel Kessler in May of last year in a rematch of their April 2010 bout in which Kessler unanimously decisioned Froch as part of Showtime’s 'Super Six World Boxing Classic.'

Prior to facing Vera, Chavez had scored a 12th-round knockdown during a unanimous decision loss to Sergio Martinez, who added Chavez's WBC middleweight title to THE RING championship Martinez already held.