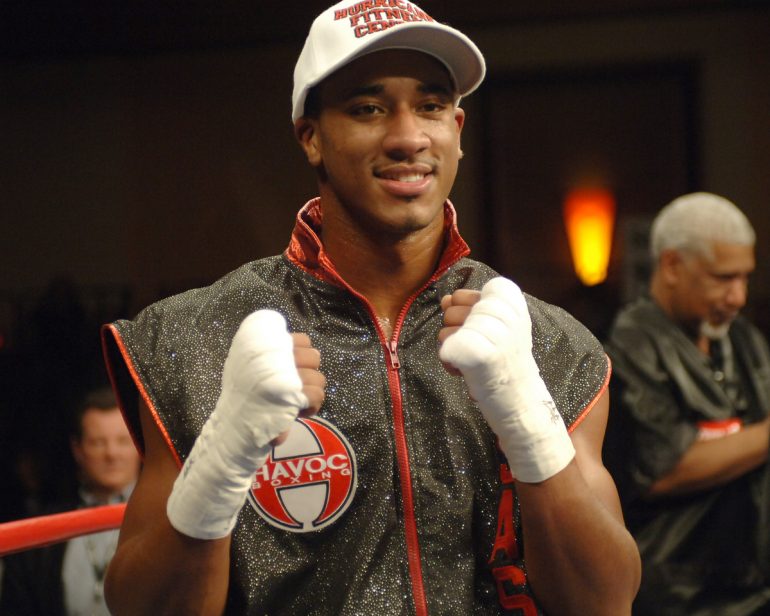 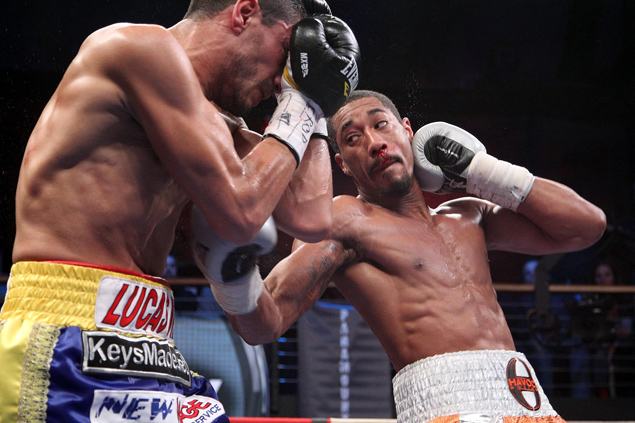 Demetrius Andrade digs a right hook to Freddy Hernandez en route to scoring a shutout decision over the veteran in 2013. Photo by Tom Casino-SHOWTIME

The 26-year old Rhode Island native says he respects Rose but isn’t concerned about what his British challenger brings to the ring.

The bookmakers seem to share Andrade’s confidence tabbing him as a -1000 (1/10) favourite to retain his title.

The former U.S. amateur standout who won gold at the 2007 World Championships before appearing at the 2008 Olympic Games has high hopes for the future.

“Unify the division, stay undefeated and to become a superstar in boxing,” Andrade said when asked about his goals. “I want to be known as a great, great athlete.”

Anson Wainwright – What are your thoughts on this fight?

Demetrius Andrade – I’m going in there to do what I do best. I’m going to show everybody I deserve this belt and it’s sticking with me a long time and that, hopefully, I’ll unify the division.

AW – When you watch Rose, what do you see in terms of strengths and areas that you can exploit?

DA – In his last fight he was stationary. I don’t know his strengths and don’t really care. He’s going to have to deal with me. I will expose him.

DA – I got up and ate pancakes, worked hard in the gym and then a little ice cream and maybe some cupcakes. I had no problems making weight. I’ve learned how to control my eating and keep my weight down between fights. I don’t run too much, I’m not training for a marathon, and I sparred three times a week.

AW – You won the title beating Vanes Martirosyan. Talk us through that fight?

DA – I knew I was the better fighter. Everything was on my side and I just had to execute. I got right up from that flash knockdown in the first round and simply out-boxed him the rest of the fight. I had him running around.

AW – What would you say about the knockdown? You appeared to gather yourself well and get straight back to the game plan?

DA – I got right back up like a true champion. I was just off balance. I’m not saying he didn’t hit me with a good punch, but he threw the pitch as I was jumping in to throw a straight left. It was momentum that put me down. I got up like nothing happened and he knew I wasn’t hurt because he didn’t come in for the kill.

AW – What did it mean to you when you were announced as the winner, allowing you to achieve your dream of becoming world champion?

DA – Beautiful! I just put my mind to it and worked hard to make it happen like anything in life. I enjoyed it and look forward to doing it again.

AW – I know you and Shawn Porter are very good friends. You helped each other with sparring for you title wins last year?

DA – I helped him and he would have helped me if I needed him. I’m fighting a taller guy so I needed sparring partners taller than Shawn (who is 5-foot-7). We’ve been friends for 10 years. We were part of the same amateur team growing up. Even though I won the world title, I still wanted to help him and we sparred.

AW – It's been seven months since you last fought what have you done in that time?

DA – Hanging with my family, seeing them grow, and trying to make their lives better. I was also in the gym working and coming up with the master plan.

AW – Now that you are a world champion, what goals do you still have?

DA – Unify the division, stay undefeated and to become a superstar in boxing. I want to be known as a great, great athlete.

AW – The junior middleweight division is one of the strongest in boxing. When you see some of the boxers fighting there what are your thoughts?

DA – Whoever has a world title belt; I want to be the best, so I want to fight the best.

AW – Who is your boxing hero and why?

DA – I like watching Muhammad Ali documentaries and fights; Roy Jones, and I have to say Floyd Mayweather Jr. I look up to him for all he’s done for boxing by being dedicated and working hard.

AW – In closing do you have a message for Brian Rose?