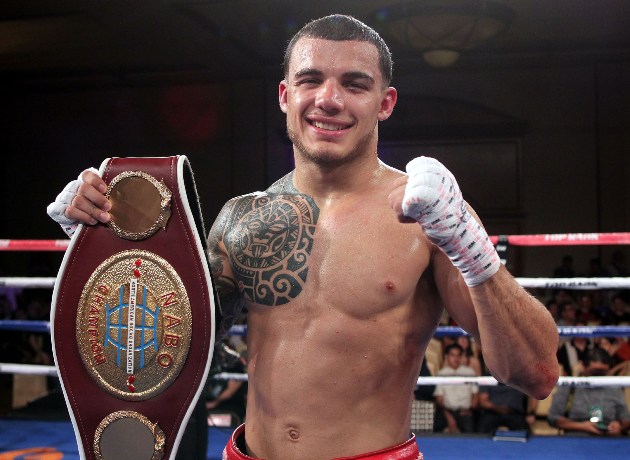 That's because the once-beaten Tapia, 24, has spent nearly the past two months training alongside Cotto and WBO junior welterweight titleholder Ruslan Provodnikov under the guidance of Freddie Roach at the six-time "Trainer of The Year"'s Wild Card Boxing Club in Hollywood, Calif.

"We were in camp together, so it was like watching my teammate when it came to that fight," said Tapia (20-1, 12 knockouts) of Passaic, N.J., who will return to action on Saturday against Keenan Collins at Bally's Event Center in Atlantic City, N.J. "Along with [Cotto] and Ruslan Provodnikov, we were together almost every day. We would run together and we would see the struggles and the pain and the work that went into our training."

Tapia was last in action in December, when he was stopped in the sixth round by hard-hitting James Kirkland at Boardwalk Hall in Atlantic City. The 37-year-old Collins (15-8-3, 10 KOs), of York, Pa., was last in the ring for a fourth-round stoppage loss to Danny Jacobs in April of last year.

Although Roach will not be in Tapia's corner, he will be guided by an assistant to Roach in Ernie Zavala and veteran cutman Miguel Diaz. Meanwhile, Roach will be with Provodnikov when the Siberian fighter faces Chris Algieri on Saturday at Barclays Center in Brooklyn.

"Miguel Cotto was the first one of us to get into the ring after being together," said Tapia. "So seeing him on television and what he did with Martinez was great motivation, so now, it's our turn coming up this weekend."

Tapia said Wednesday will be the last of two consecutive days during which he will train under the eyes of Roach and alongside Provodnikov at The Everlast Lab in Hoboken, N.J.

"It's in the way that Freddie talks to me. He'll tell me, 'It's good but it's not perfect.' He's always striving for perfection and it's really hard to please him, but it's really good. When I come back the next day, realizing that I've done what he told me to do, you feel like you're rising to a different level."

"I just can't wait to show you guys what I've been working on with Freddie. I feel so good and I just want to show it in the ring. I want to show that the 'Jersey Boy' is back," said Tapia. "It's more than just a fight for me. I'm going to put my heart on the line for everybody because I like to entertain. I just want to win, entertain, give the crowd what they want to see in the return of the 'Jersey Boy.'"