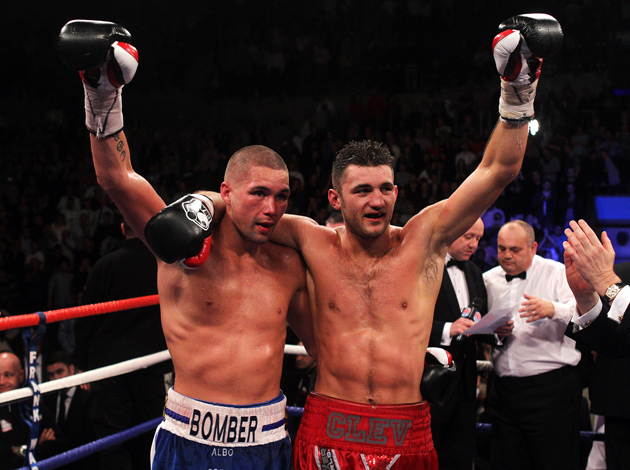 British cruiserweight rivals Nathan Cleverly and Tony Bellew will share top billing at Liverpool’s Echo Arena on July 12 as they edge ever closer to an anticipated rematch later this year.

In his second outing at 200 pounds, 28-year-old Welshman Cleverly, a former light heavyweight titleholder, faces Argentina’s Alejandro Emilio Valori (15-4, 11 knockouts), who has never fought outside his home country before.

Matchroom supremo Hearn confirmed last week that Cleverly (27-1, 13 KOs) and Bellew (21-2-1, 13 KOs) would be featuring on next month’s card and, as long as both win, are very much heading for a grudge return clash. This has now been penciled in for November. Two years ago at the same Liverpool venue, Cleverly beat Bellew, by way of a majority decision, in a bitter WBO light heavyweight title defense.

"This is my third fight in Liverpool and it's been a good hunting ground for me," said the Cefn Fforest man in the South Wales Argus on Tuesday "Hopefully it will be the same again but Valori is going to come to fight. I'm in the cruiserweight category now and these guys have got a lot of weight on them.”

Cleverly moved up divisions following a crushing 4th-round KO by Sergey Kovalev last summer. But injury and illness delayed his cruiserweight debut until May when he stopped Shawn Corbin in just two rounds.

“I love this weight division,” said Cleverly. “I feel natural at this weight and I feel strong and sharp and after a successful first fight I want to keep that momentum going now. I'm keeping busy with a second fight in three months but I'm fresh and I'm going to make sure I keep winning.

“Hopefully Bellew keeps doing the business as well and then we're going to get it on."

Bellew is promising not to let anyone down in that respect by staying focused on the immediate task before him in 36-year-old Dos Santos.

“It’s all I’m looking at – July 12 – and getting this next guy out of the way. And then move onwards and upwards,” said the 31-year-old Englishman, who in March opened his account as a cruiserweight with a 12th-round KO of Valery Brudov.