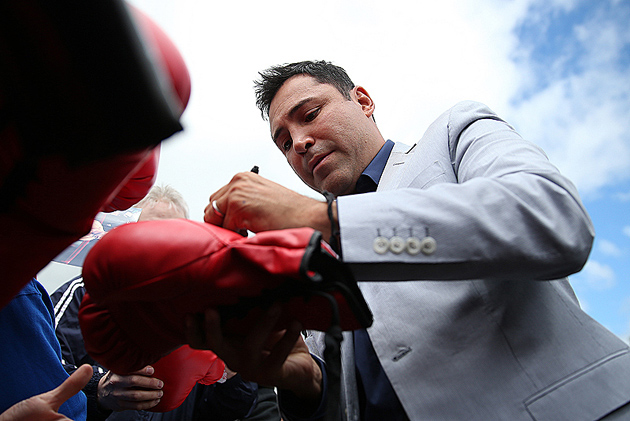 CANASTOTA, N.Y. – Oscar De La Hoya was a fan magnet at his peak. Wherever he went, they would follow in hopes of getting his autograph or just a glimpse of the dashing Golden Boy, the driving force of boxing for about a decade.

Not too much has changed, at least not as it unfolded at the International Boxing Hall of Fame this weekend.

De La Hoya clearly is the star of the show in this small town in Central New York, as passionate fans have flocked to him much as they did when he was at his peak in the late 1990s and early 2000s.

For example, hundreds surrounded him when he doing an interview for Spanish-language television on Friday, most holding memorabilia they hoped he would sign and craning their necks to get a good look at the superstar.

He didn't disappoint anyone when the interview was over, standing in the warm afternoon sun with a smile for about a half hour giving the fans what they wanted. He never seemed happier.

“There hasn't been a moment like this since I won the Olympic gold medal (in 1992),” he said. “The Olympic gold and the Hall of Fame are by far the best moments of my life in boxing.”

The honor came at a good time for De La Hoya, who recently emerged from a stint in rehab at peace with himself and his life. He's clearly is in the mood to celebrate. And he didn't want to do it alone, which is why he brought members of his family and staff at Golden Boy Promotions across the country to share the moment.

One aspect of induction that is particularly meaningful to him is it's permanence.

“Why is this so special? The fact that we will be part of history forever,” he said. “My kids can come back here when they're older and see their father at the Hall of Fame. The same with their kids … and their kids … and so on. It's so special. The fact Muhammad Ali was inducted here, all the great fighters … it really is an honor and privilege to be here.

"I think about when I was 10 years old in East L.A., waking up at 4 a.m. every day to train. I think of all the hard times, the humble beginnings. Never in my wildest dreams did I think I'd be inducted into the Hall of Fame. Everything happening in my life is so positive, my family, my kids, me being at peace with myself. It's beautiful. It really is. And this is the icing on the cake.”

The iconic image: Neil Leifer has taken many memorable sports photos for a number of prestigious publications over a long, distinguished career. However, he is being inducted into the Hall of Fame largely because of one image.

Everyone knows it: A menacing Muhammad Ali standing over a fallen (and beaten) Sonny Liston in their rematch in 1965. It is one of the most recognized sports photos ever.

It's not Leifer's favorite among his boxing photos, though. He prefers another well-known overhead image of Ali knocking out Cleveland Williams in 1966, which was taken by a camera placed in the rafters at the Houston Astrodome.

“I know I'm going to be remembered for Ali standing over Liston,” said Leifer, who acknowledged that luck played a role in getting that shot. Ali happened to be facing him at the key moment. “My favorite was Ali from overhead, the Ali-Williams picture. That picture is my favorite. That's the one that hangs in my house and has been there for 40 years.

“That picture was not luck. That was one I worked on. Yeah, I had to get the knockout but that would've happened in the next few fights. I'm very proud of the Ali-Liston picture, though.”

What made the Ali-Liston photo so iconic?

“I know what it is,” he said. “When the picture was first shot, it not only didn't make the cover of Sports Illustrated. … My picture was Page 4. How many awards to do you think it won that year? Zero. At the end of the century people are calling it the photo of century. To answer your question, as Ali's reputation grew and got greater and greater, that picture took on a life of its own. That's how people wanted to remember Ali, as a young athlete. That's when he was at his absolute prime.

“I'd love to say it was the photograph. If Ali hadn't been Ali. it would've been just another nice knockout picture.”