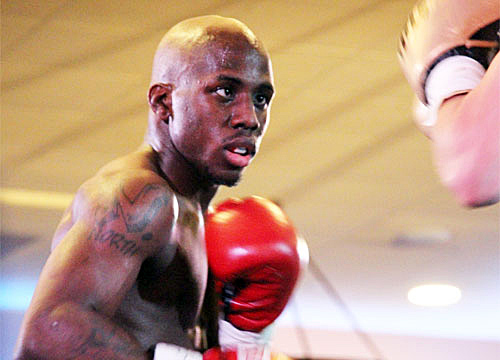 While it is not set in stone, the unbeaten house fighter is supposed to get the win, right?

Whether by knockout or decision, the fighter looks good, gets the win, and moves on to the next fight.

Junior lightweight prospect Emanuel Gonzalez fit the profile on Thursday night. The only problem was that his opponent Tevin Farmer did not get the memo he was supposed to be just an "opponent."

Farmer boxed superb through most of the 10-round bout, winning a convincing unanimous decision victory over Gonzalez at the House of Blues in Boston, Mass.

The 26-year-old Gonzalez was coming off an eight round unanimous decision win over Victor Sanchez on January 30. His fight against Farmer on Thursday was his first scheduled 10 round bout of his career.

Despite having won eight fights in a row prior to the Gonzalez fight, Farmer was still considered an underdog in the fight. In his previous fight on January 31, he won an eight round unanimous decision over Noel Echevarria.

From the opening bell, the southpaw Farmer took the initiative, beating Gonzalez to the punch. Behind a jab, Farmer won numerous exchanges that culminated with repeated left hands or counter right hooks to the head. As early as the third round, Gonzalez looked frustrated, either because he was getting hit repeatedly or was not landing as many punches flush to the head as Farmer was landing.

Midway through the fight, Gonzalez stalked Farmer around the ring, looking to land a right after pawing a jab. Whenever he opened up, Farmer continued to counter well to the head.

As the bout entered the final stanzas, and sensing he was down on the scorecards, Gonzalez pressed the action. He landed much more, especially with right hands to the head. Farmer was content to box, holding or countering as Gonzalez came within punching range.

Martz stops Santos
In the co-main event, heavyweight Daniel Martz stopped Alexis Santos after the third round after Santos suffered a peculiar injury.

Martz, who had a seven-inch height advantage, attempted to keep Santos on the outside with consistent jabs from the opening bell.

During an exchange later in the round, Santos landed awkwardly on his left ankle as he stepped forward to land a punch, turning his ankle. From that point, Santos was affected by the freak incident, as he was unable to sit down on his punches. Moments later in the round, a barrage of punches dropped Santos to one knee. He would make it out of the round.

Santos fought on courageously in the second and third rounds. Because of the injury, he was unable to launch any offensive attacks, save for throwing an occasional overhand right hand whenever he was on the inside. He voluntarily went down three times in the second round alone, due to not being able to put any pressure on his foot.

To his credit, Martz pressed the attack, never letting up and keeping Santos on the defensive. After the end of the third round, Santos' corner saw enough and told referee Leo Gerstel that their fighter had enough.

Kavanagh overwhelms Clark
In the opening bout of the telecast, lightweight prospect Jamie Kavanagh stopped veteran Michael Clark in the fifth round.

After an even first round, Kavanagh began to increase his punch output with each round, attacking the body of Clark repeatedly.

Undaunted, Clark did find success landing to the head of Kavanagh. As the bout progressed, Kavanagh's face slightly reddened from the number of times Clark connected.

The rally was short lived as Kavanagh pressed the fight. Clark's punch output in the fourth and eventual fifth rounds dropped and he had a difficult time keeping the aggressive Kavanagh off of him.

Towards the end of the fifth round, Kavanagh landed a counter right hand to Clark's head. Clark dropped face first to the canvas and eventually stood up. Despite getting up, Clark offered no protest when referee Stephen Clark waved the fight over at 2:49.

Towards the end of the first round, Kelly landed a chopping counter right hand to the Newell's head. Newell fell face-first to the canvas and struggled to get on his feet. While Newell was able to stand, referee Stephen Clark saw enough, stopping the bout at 2:34.


Francisco A. Salazar has written for RingTV since October of 2013 and has covered boxing in Southern California and abroad since 2000. He also covers boxing for the Ventura County (CA) Star newspaper, Boxingscene.com, and Knockout Nation. He can be reached by email at [email protected] or on Twitter at FSalazar