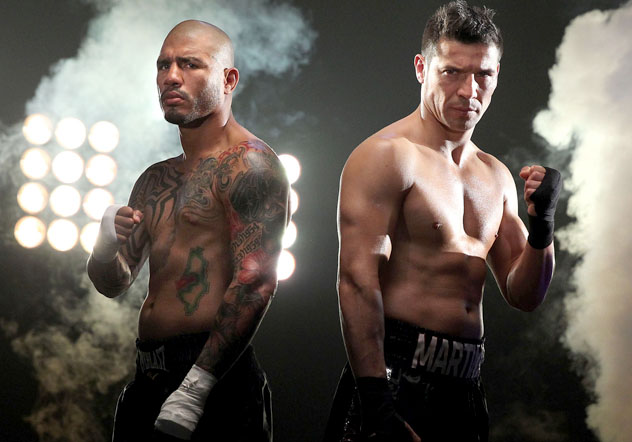 RingTV.com has a live round-by-round update of Saturday's 159-pound catchweight during which RING and WBC middleweight champion Sergio Martinez was dropped four times and dethroned by three-division titlist Miguel Cotto at Madison Square Garden in New York on HBO Pay-Per-View.

The corner of Martinez (51-3-2, 28 knockouts), who was bleeding from a cut on his right eyelid, stopped the fight. The official time being recorded as six seconds into the 10th round for the technical knockout. Having fought at junior middleweight since 2010, Cotto (39-4, 32 KOs) moved up to a middleweight catchweight of 159 pounds for the first time in and became the first Puerto Rican fighter to win a fourth title in as many weight classes.

Cotto set the tone by dropping Martinez three times in the first round and once more in the ninth, out-landing Martinez, 212-to-100 in total punches, 158-to-60 in power shots.

Martinez, 39, had vowed to retire Cotto – who had been prone to cuts – by slicing the Puerto Rican challenger's face to ribbons much as he has those of past opponents.

The 33-year-old Cotto was in his second fight with six-time Trainer of The Year Freddie Roach, who had stated that Martinez – injury-ravaged over the course of his past two fights – would last just "four rounds."

Martinez was 7-0 with four knockouts since falling by majority decision to Paul Williams in December 2009, having avenged that loss by stopping Williams in the second round in November 2010.

The event took place the night before the Puerto Rican Day Parade; Cotto is  10-1 with six knockouts in New York and 8-1 with five  stoppages at the Garden.

Cotto was coming off a third-round stoppage of Delvin Rodriguez in October that helped him bounce back from consecutive decision losses to Floyd Mayweather Jr. and Austin Trout in May and December 2012, respectively. Cotto's loss to Trout represented his eighth appearance at the Garden and his 10th in New York.

Cotto being roundly cheered, and Martinez, similarly booed, as they are each shown on the big screen at The Garden prior to the singing of the Argentine, Puerto Rican and United States national anthems.

Cotto enters the ring first with no music to the rousing applause of his partisan fans wearing a black and red top which reads "COTTO" across the back in white letters.

Martinez is being booed as he comes into the arena wearing a black robe with white sleeves, and, "MARAVILLA MARTINEZ" in white lettering on the back.

The comparitive cheers and boos for Cotto and Martinez are even more emphatic during the introductions, after which the crowd already has begun to chant Cotto's name.

Round 1: Fighters at ring center. Martinez already firing the jab. Hard right over the top from Cotto. Jab to the body by Cotto. Martinez circling. Another right by Cotto. Yet another right by Cotto. Hook by Cotto. HARD LEFT HOOK SHAKES MARTINEZ, WHO STUMBLES LEFT AND NEARLY GOES DOWN. Cotto's on him in a corner. Three hard shots to the body by Cotto. MARTINEZ DOWN FACE FIRST FROM A DOUBLE-LEFT TO THE HEAD. He's up. A full 90 seconds left. Body shot by Cotto. Martinez is shaky. ANOTHER LEFT HOOK BY COTTO DROPS MARTINEZ. APPEARS THAT MARTINEZ'S RIGHT LEG HAS GONE OUT ON HIM. He's up, but DOWN AGAIN APPARENTLY FROM A LEFT TO THE HEAD FOLLOWED BY A LEFT TO THE BODY!!! There are 23 seconds left, and Martinez manges to last the round.  Cotto, 10-6

Round 2: Martinez shaky, having been out-landed, 25-to-8, in Round 1. Bleeding from behind the ear. Cotto's cutting off the ring and forcing Martinez toward the right knee. Cotto's relaxed, takes two jabs by Martinez. Hook by Cotto. Martinez appears unable to escape it. Martinez down from an apparent right to the head, but referee Michael Griffin rules it a slip. Right to the head from Cotto. They trade lefts. Right by Cotto. Martinez is simply a feeble fighter. Right by Martinez. Left hook by Cotto. Cotto, 10-9; Cotto, 20-15

Round 3: Martinez already rocky in the second round from a right hand. Left by Martinez, left by Cotto. Right hand by Cotto. Clinch. Martinez can't keep Cotto off him, gets drilled to the head and body in a corner prior to a clash of heads that slows the action. Right, left, right by Martinez. Cotto hammers home a left to regain the momentum. Left to the head and two more shots to the body by Cotto. Left by Cotto is matched by a Martinez right. In the corner, Cotto lands three times to the body. Martinez takes another hard right and another from Cotto followed by a left to the body. Jab by Martinez as Cotto's mouth drips blood. Cotto's jab lands prior to a left and a right by Martinez. Cotto, 10-9; Cotto, 30-24.

Round 4: More of the same to start the fourth. Cotto pursuing behind his right hand and Martinez trying to adjust. They trade jabs, Cotto's still the stronger of the two. Hook by Cotto. They trade jabs. HARD LEFT HOOK HURTS MARTINEZ. Uppercut by Cotto. Hook by Cotto. Right and left by Cotto on the ropes and then a right by Cotto. Left by Cotto precedes a right hook by Martinez. Decent left by Martinez gets Cotto's attention. Two more lefts by Martinez find their mark. Another left by Martinez. Hard right to the body by Cotto. Right and then a left both to the body by Martinez, who appears more steady at round's end. Cotto, 10-9; Cotto, 40-33.

Round 7: Cotto out-landed Martinez, 18-12, in power shots in Round 6. Martinez settling in behind his jab, and has Cotto retreating for the first time, briefly. LEDERMAN HAS IT FOR COTTO, 59-52. Cotto's back on the attack behind his jab and right hand. Left to the head and right to the body by Cotto. Right hook by Martinez. Cotto left briefly shakes Martinez, as does a subsequent hook, which is harder. Right, left, right by Cotto, the last shot to the body. Cotto's boxing. Left, right, left by Martinez to end the round. Cotto, 10-9; Cotto, 69-61.

Round 8: Cotto has out-landed Cotto, 158-to-79, according to CompuBox. Recall that Martinez predicted a ninth-round KO. Martinez asked for ice on his right neck between rounds. Cotto's relaxed and jabbing with Martinez. Decent left and another from Martinez over the jab. Jab by Martinez and a missed left. Right by Cotto, who then dances away. Left hook by Cotto gets Martinez's attention. Cotto's eluding Martinez's jab. Left hook from Cotto. Martinez lands a left that Cotto takes easily. Right by Cotto, who dances away. Cotto, 10-9;  Cotto, 79-70.

Round 9: LEDERMAN HAS IT FOR COTTO, 79-70. Cotto's jabbing and forcing Martinez backward again. Hard right hand shakes Martinez, yet again. BRUTAL LEFT UPPERCUT FROM COTTO. Jab by Cotto. Right hand by Cotto. Martinez clinches. Left, left and a right by Cotto, and then a hook. Martinez is getting battered. Double-jab by Martinez. Left hook to the body by Cotto. Right to the head by Cotto. Another left hook by Cotto. Martinez takes another hook. Hook and a jab by Cotto on the ropes, and then he dances away. Jab by Cotto. LEFT TO THE HEAD FORCES MARTINEZ TO A KNEE FOR THE FOURTH TIME, BRIEFLY. He's up, but looks bad. Cotto, 10-8; Cotto, 89-78.