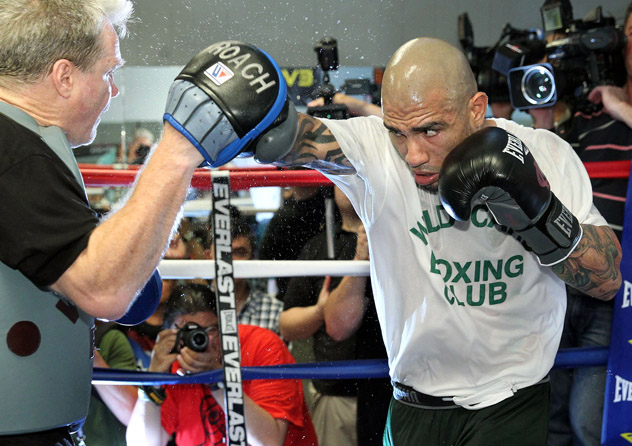 Trainer Freddie Roach said Sergio Martinez is "in over his head on this one," was "ruined" by Julio Cesar Chavez Jr. and "has nothing left" heading into Saturday's bout against three-division titlist Miguel Cotto, against whom the 39-year-old Argentine will defend his RING and WBC middleweight championships at Madison Square Garden in New York on HBO Pay-Per-View.

Cotto, 33, is coming off a third-round stoppage of Delvin Rodriguez in October that represented his first bout under Roach, the six-time "Trainer of The Year" who helped the Puerto Rican bounce back from consecutive decision losses to Floyd Mayweather Jr. and left-hander Austin Trout in May and December 2012, respectively.

Roach was in the opposite corner of Cotto in November of 2009 as the trainer for Manny Pacquiao, a southpaw, during the latter's 12th-round knockout victory that dethroned Cotto as WBO welterweight beltholder.

Roach was also in the corner of Chavez Jr. in September 2012 when Martinez had to rise from a 12th-round knockdown to secure a unanimous decision victory.

"Sergio is in over his head on this one," said Roach of Martinez, who will face Cotto at a catchweight of 159 pounds. "We worked on fighting southpaws and have it down to a science now. Miguel will have no trouble with Sergio’s style."

Roach, Cotto and Pacquiao were together in early April at the Top Rank Gym in Las Vegas as Pacquiao was completing the final stages of preparation for a unanimous decision victory over Tim Bradley at the MGM Grand Garden Arena on April 12.

"Working opposite Miguel with Manny Pacquiao gave me great insight to Miguel's flaws," said Roach. "It taught me his weaknesses and during this camp, I was able to eliminate them."

Before working with Roach, Cotto had been trained by Pedro Diaz for his previous three bouts – the losses to Mayweather and Austin Trout as well as a ninth-round stoppage win over Antonio Margarito in December 2011.

Margarito had handed Cotto the first loss of his pro career, dethroning him as WBA welterweight titlist with an 11th-round round knockout in July 2008.

Martinez has risen from the canvas during each of his past three fights comprised of an 11th-round stoppage of Matthew Macklin and unanimous decision victories over Martin Murray and Chavez.

After the Chavez fight, Martinez received eight stitches to repair a cut over his left eye, two staples in his head and suffered from both a broken left hand and torn ligaments in his right knee, the latter of which required surgery to repair.

Martinez required a second surgery after having damaged the knee injury, later determined to be a torn right meniscus, after his triumph over Murray in his last fight in April 2013.

"The wear and tear of the Julio Cesar Chavez Jr. fight ruined Martinez," said Roach. "Martinez has nothing left. Miguel is the fresher fighter."

Cotto is trying to become the first Puerto Rican fighter to win four titles in as many divisions against Martinez, having fought as a junior middleweight since 2010.

"Can I carry my power up to 160? I'm a puncher and my power has come with me from 140 to here at 160. I’m not worried about Sergio and what he has done or what he will do," said Cotto. "I'm only worried about what I need to do and what Freddie has taught me and what we worked on in training camp. The man with the best skills will win this fight."