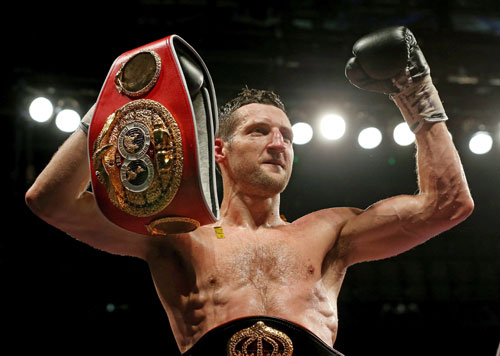 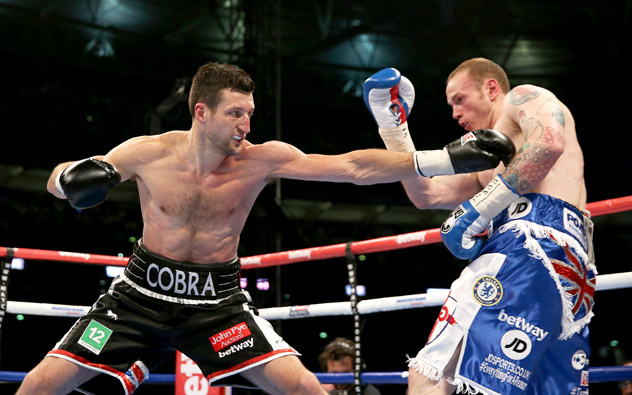 Carl Froch spears domestic rival George Groves with his jab during their May 31 rematch in London. Photo by Scott Heavey-Getty Images

Fight fans were treated to many world-class fights and events internationally last week, and THE RING’s divisional and pound-for-pound rankings were affected by the action.

Pound-for-Pound: British super middleweight standout Carl Froch was the star of weekend as he scored a decisive eighth-round KO in his anticipated rematch with domestic rival George Groves in the main event of what was arguably the event of the year, so far. Approximately 80,000 fans packed Wembley Stadium in London to see if Groves, who appeared to have Froch’s number in their controversial first bout, could end the veteran’s title reign. Froch showed that he’s still on top of his game by halting the talented challenger who is 10 years younger. Groves name is added to an impressive list of opponents that includes Andre Ward, Mikkel Kessler, Jean Pascal, Lucian Bute, Jermain Taylor, Glen Johnson, Arthur Abraham, and Andre Dirrell. Only pound-for-pound No. 2-rated Ward has decisively beaten Froch. Froch, who was rated No. 10 in THE RING’s pound-for-pound rankings, will switch places with No. 9-rated Canelo Alvarez.

Heavyweight: No. 2-rated Alexander Povetkin (27-1, 19 knockouts) had a good win over Manuel Charr stopping the once-beaten unrated heavyweight by KO in Round 7.

Lightweight: No. 6-rated Kevin Mitchell (38-2, 28 KOs) was down on the cards but managed to stop Ghislain Maduma in Round 11.  No. 2-rated Richard Abril had his fight fall through with Eduard Troyannovsky and thus has been inactive since March 2013. Abril will be removed from the ratings due to inactivity and Sharif Bogere will re-enter at No. 10 with everyone else moving up one spot.

Featherweight: No. 7-rated Nonito Donaire (33-2, 21 KOs) won a Technical Decision over defending WBA beltholder Simpiwe Vetyeka with the fight going to the score cards in Round 5 due to an accidental head butt. No. 3-rated Evgeny Gradovich (19-0, 9 KOs) got up from a knockdown to win a wide points decision over Alexander Miskirtchian.  No. 5-rated Nicholas Walters (23-0, 20 KOs) knocked out veteran Vic Darchinyan. Movement in the 126-pound ratings is as follows: No change in Nos. 1 and 2; No. 3 Walters; No. 4 Donaire; No. 5 Gradovich; No. 6 Vetyeka; No. 7 Billy Dib; No. 8 Ronny Rios; No. 9 Lee Selby; No. 10 Vasyl Lomachenko.

Junior featherweight: We previously had Darchinyan at No. 5. However, his last two fights have been at 126. He will be removed from the 122-pound ratings; everyone else will move up one spot and Chris Avalos  (23-2, 17 KOs) will enter at No. 10.

Chuck Giampa, the Chairman of the Ring Ratings Committee, can be emailed at
[email protected]