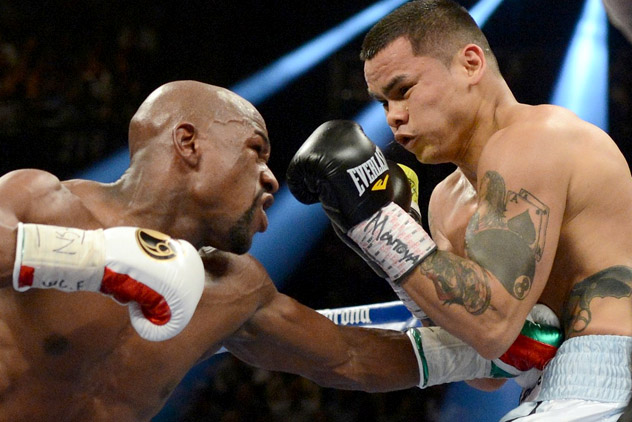 Mayweather Promotions CEO Leonard Ellerbe said the RING's number one-rated pound-for-pound boxer would do business with Golden Boy Promotions if it meant a return bout with junior middleweight Saul Alvarez during a Tuesday interview with RingTV.com.

Amending comments he made on Monday that he would "absolutely not" continue working with the company hours after former CEO Richard Schaefer had announced his resignation from Golden Boy, Ellerbe also said Mayweather Promotions would be open to matching its fighters against those of Golden Boy, whose president is Oscar De la Hoya.

"The door is open for future business with Golden Boy," said Ellerbe, in part, later adding, "The only person that I see in their stable that we can see doing a future fight with where there is big business, that would be against 'Canelo' Alvarez."

Mayweather made a career-high $41.5 million purse for last September's win over Alvarez, the latter of which grossed an all-time record $150 million. Mayweather-Alvarez surpassed the $136 million for Mayweather's split decision over De la Hoya in May of 2007, which dethroned De la Hoya for the WBC’s junior middleweight belt.

An online report by Forbes Magazine estimated that Mayweather's exclusive six-fight agreement with Showtime – his fourth in the agreement scheduled to happen on September 13 at the MGM Grand in Las Vegas against an opponent to be determined – could be worth a guaranteed total of $250 million.

Alvarez rebounded from the loss to Mayweather with a 10th-round stoppage of Alfredo Angulo in March and will face southpaw Erislandy Lara on July 12 at the MGM Grand on Showtime Pay-Per-View.

"The door is open for future business with Golden Boy but as it relates to September 13, we've got a mega-fight coming up and we're in the planning and preparations stages and we've been that way since the May 3 fight was over," said Ellerbe.

"As far as I'm concerned, the only person that I see in their stable that we can see doing a future fight with where there is big business, that would be against 'Canelo' Alvarez somewhere down the road but we only have a few fights left. We're not sitting around and we've known what we're going to do since the May 3 fight."

With Mayweather's considerations for September 13 likely to include a rematch with Maidana or else bouts against RING junior welterweight titleholder Danny Garcia or former titleholder Amir Khan, Ellerbe would go directly to their advisor, the powerful Al Haymon, who also handles Mayweather.

"As it relates to…the potential opponents we're looking at for September 13, I only have to pick up the phone and talk to the same guy that I talk to every day, all day anyway who is working with those guys," said Ellerbe, referring to Haymon without mentioning him by name.

"I'm talking to my business partner, who has all of the guys we're looking at for Floyd Mayweather. I'm talking to the manager and their advisor to potentially make deals for the biggest fights that Floyd can be in."

"As far as the future, we would be interested in dealing with them beyond September 13 for our other fighters but I don't know what their promotional stable looks like," said Ellerbe. "I am not sure which fighters they have in their stable but if there is an opportunity to match our fighters with their fighters, then I don't have anything personal against them and I don't have a problem with that."