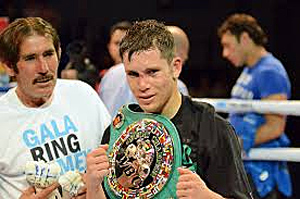 THE RING's No. 2-rated junior bantamweight Carlos Cuadras scored an eighth-round technical decision over RING No. 3-rated Srisaket Sor Rungvisai of Thailand, earning the WBC title before his partisan fans in Mexico on Saturday.

In victory, the 25-year-old Cuadras improved 30-0 with 24 knockouts, ending a 26-fight winning streak for the 27-year-old Rungvisai (27-4-1, 25 KOs) that had included 24 knockouts, including the previous six straight.

Cuadras was ahead, 77-74, 77-75, and, 78-73, on the cards of Mauro Di Fiore, Cathy Leonard and Dick Flaherty, respectively, after a clash of heads in the final round worsened nasty cut over Cuadras' left eyebrow that had initially emerged following an accidental head butt in the fourth. The situation led to referee Jay Nady halting the fight on the advice of a ringside doctor.