Sergio Martinez: Miguel Cotto to be ‘evicted’ from MSG home 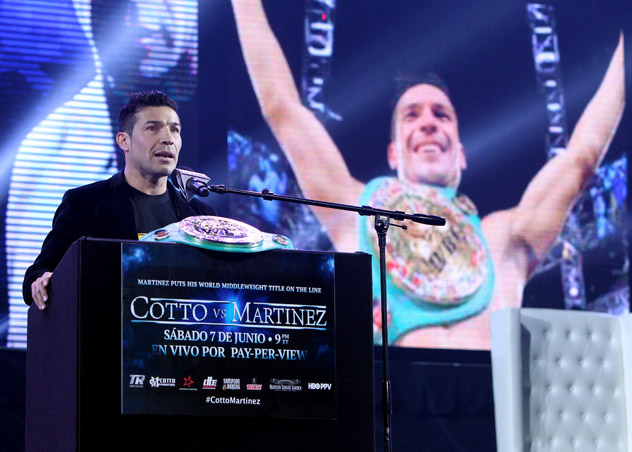 HBO has provided a final training blog taken from an interview with Sergio Martinez on June 2 in advance of the Argentine RING/WBC middleweight champion's title defense against Miguel Cotto on Saturday at Madison Square Garden in New York City.

Martinez (51-2-2, 28 knockouts), who turned 39 in February, will be making his debut at the Garden proper, where Cotto is 7-1 with four knockouts and where other Argentines such as Carlos Monzon and Oscar Bonavena have fought in the past. Martinez defeated Matthew Macklin in the Theater in March of 2012.

Martinez is 35-1-1 with 22 knockouts since being stopped in the seventh round by Antonio Margarito in February 2000, and has been middleweight champion for four years since defeating Kelly Pavlik by unanimous decision in April 2010.

Martinez has not lost since falling by majority decision in December 2009 during a "Fight of the Year"-caliber brawl with Paul Williams that featured first-round knockdowns by each fighter. Martinez is also 7-0 with four stoppages since falling to Williams, a loss he avenged by stopping Williams in the second round in November 2010.

Martinez has not fought since April of last year when he rose from an eighth-round knockdown for a unanimous decision over Martin Murray in Buenos Aires.

Martinez: "It has been a major dream of mine to fight at Madison Square Garden in the big room. I never would have imagined that I would be headlining a main event over there if you asked me that 10 years ago.

"The Argentinean community in New York has always been very supportive of me and I expect an incredible atmosphere similar to a World Cup soccer match.

"Miguel Cotto says Madison Square Garden is his home but come June 7, he will be evicted and I will prove that I am one of the best pound-for-pound fighters in the world."